In 1524, at the age of 40, Philibert Babou became Treasurer to King François I, and for the next twenty years faithfully served his King in any way he could. A particular talent of his was as a skilled code-breaker, a major reason the King valued him so highly. One of his jobs was to decypher messages between foreign powers which had been intercepted. He gained a reputation for being doggedly persistent, not resting until he had cracked a code. 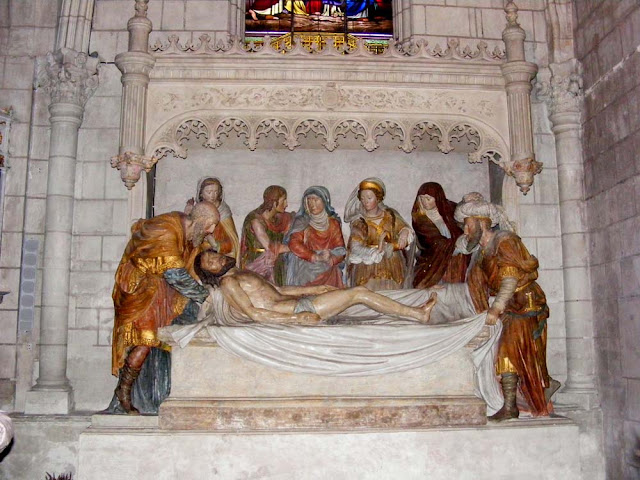 Prior to his appointment as Treasurer, he had been mayor of Tours and was the owner of a very grand hôtel particulier in the city (now known as the Hôtel de Jean Galland and the current headquarters of the Touraine Archaeological Society). In 1510 he married into the prominent Gaudin family, owners of the Chateau of Bourdaisière at Montlouis sur Loire. The bride, Marie, was probably 15 when they married, Philibert eleven years older. Together they produced eight children (five boys and three girls). From the beginning the couple were close to the King, and the powerful de Medici family in Florence (one of whom was Pope Leo X, the second son of Lorenzo the Magnificent). Their third son, also Philibert, was born in Italy in 1513 and spent most of his adult life in Rome, in the service of Henri II and his sons, as ambassador and cryptographer.

Nicodemus (on the right) and Mary of Clopas (on the left). 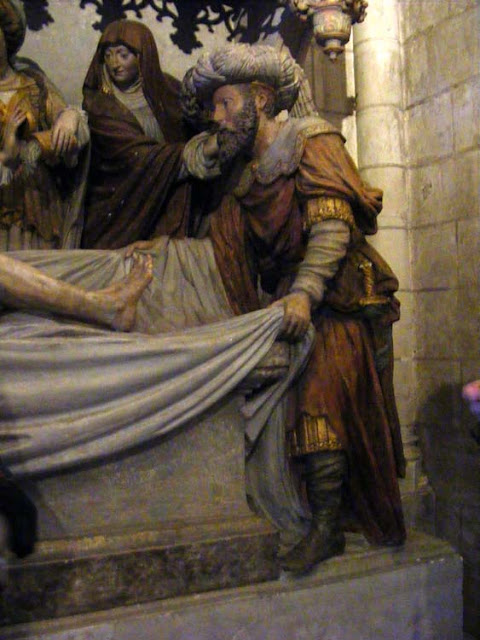 Marie was considered the most beautiful woman of her time and in 1520 François I began an affair with her. At around this time either he or Philibert commissioned the rebuilding of the chateau at la Bourdaisière, to create a fashionable modern residence for the lovely Marie. However, François did not, as far as I can tell, name Marie at any stage as his official mistress (who in 1520 would have been Françoise de Foix). On his retirement in 1544 Philibert endowed a chapel at the priory on his property the Chateau of Bondésir in Montlouis sur Loire. This chapel has now disappeared, but the funerary vault dug into the hillside underneath it still exists. Probably at the same time as the chapel and vault was commissioned he also commissioned a sculptural group of eight life sized figures in painted limestone depicting Christ's body being placed in the tomb (Fr. une mise au tombeau).

Joseph of Arimathea, with Ste Veronica in the background. 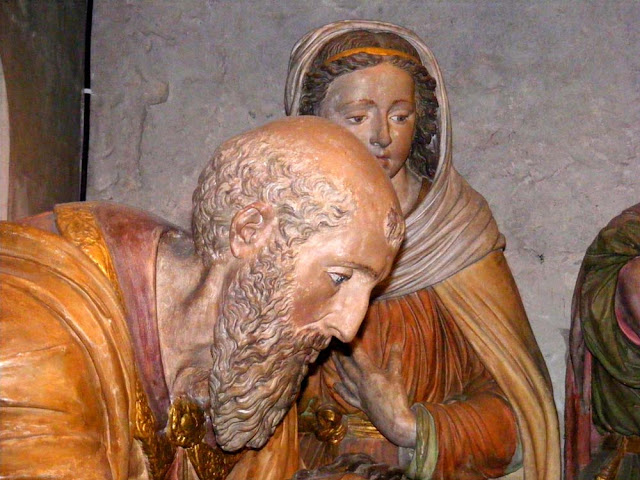 Tradition has it that the figures in the mise au tombeau are modelled on members of the Babou family. In particular, the figure of the Virgin Mary is thought to be based on Marie Gaudin, who would have been about 50 at the time the work was created. The other figures are Christ, Joseph of Arimathea (supporting Christ's head), Nicodemus (at Christ's feet), three female saints (Veronica holding the veil with which Christ wiped his face, Mary Magdalene pouring aromatic oils from a flask, Mary of Clopas holding the crown of thorns), and Saint John the Evangelist supporting the Virgin Mary. The female saints are widely believed to be the three Babou daughters, but there is considerable variation in the accounts of who the male characters are based on. Philibert is nominated as Joseph, Christ or Nicodemus depending on who you read. Christ might be based on François I, Nicodemus might be one of the Babou sons, as it is supposed Saint John is.

Mary, the mother of Christ. Is this the face of a 50 year old Marie Gaudin? 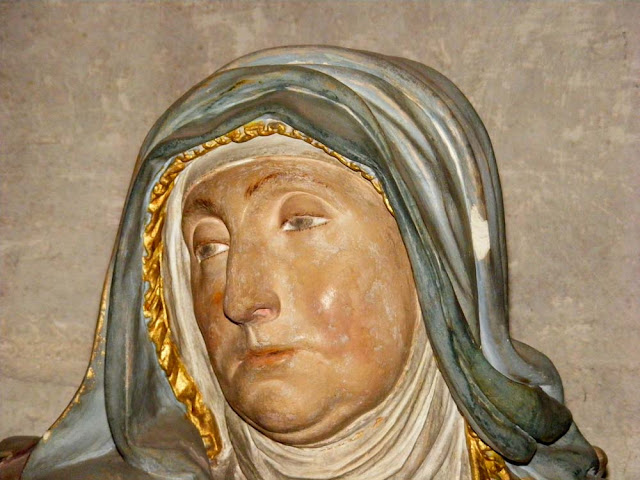 The sculpture may date from around the time of François I's death in 1547, and this has lead to some speculation that Christ is François, while Philibert is either Joseph or Nicodemus. One theory is that it was Philibert's subtle and clever way of gloating that his love rival was dead, even while making him the appropriately highest status character in the tableau. Delivering personal opinions by way of intricate coded visual cues was a regularly employed technique, but in this case it could just as easily have been a more straightforward message of honouring a powerful patron. In any event, whoever Christ is modelled on, it is certainly quite likely that the other figures are indeed modelled on the Babou family, and it would have been a fashionable approach to this sort of monument.


Mary of Clopas holds the crown of thorns on the left, Nicodemus on the right. 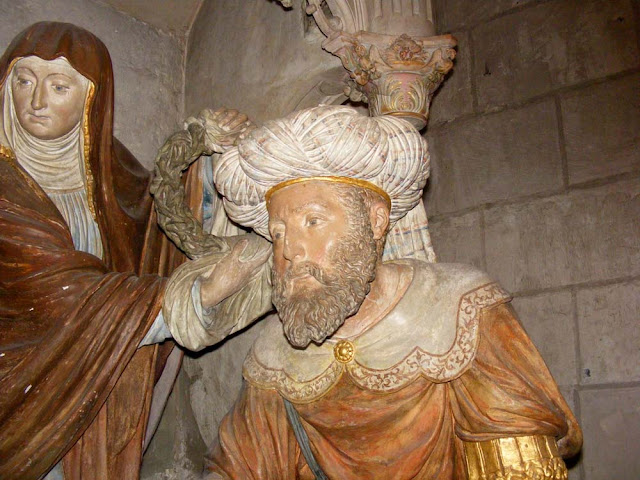 The characters wear rich and generous draperies in a somewhat orientalist style fashionable for the 16th century, the better to convey to the 16th century viewer a sense of the status of each character. Headgear is particularly important for identifying characters and sorting out status. Nicodemus is wearing a large and quite ornate turban of patterned cloth. It is this aspect of his attire more than anything which would suggest that Philibert senior is the model for him, even though Joseph of Arimathea, as the owner of the tomb, is seemingly a more obvious candidate. On the other hand, both Nicodemus and Joseph are armed and their robes gilt trimmed (ie high status). Perhaps Joseph's bare headed portrayal is to indicate a good man humbly carrying out God's work, just as Philibert may have wished to represent himself. Amongst the women, the redeemed sybarite, Mary Magdalene, is clearly the prettiest and wearing the richest garb. Her headdress, which I at first took for a crown and was puzzled by, is gilded. I think the message might be that anyone can come to God and it need not interfere with you looking gorgeous or showing off your assets. Displaying wealth and conspicuous consumption was seen as a positive thing in this period, even a duty if you were wealthy. The 16th century viewer may have read these signals a little more easily than us, but they were always complex and multi-level in the messages they carried, and the deeper one looked the more one had to puzzle it out, even when they were first presented. It was in part a test of how educated and sophisticated you were. 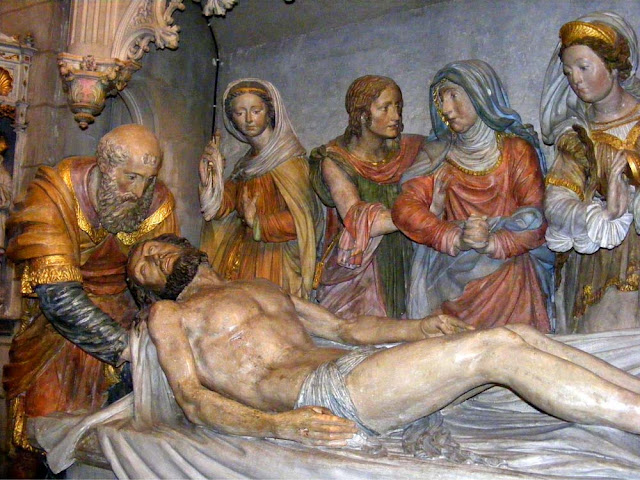 In 1770 the priory attached to the chapel was not earning enough revenue to cover expenses. The then owner of Bondésir, the Duke of Choiseul (who also owned la Bourdaisière, the Chateau of Amboise and the Chateau of Chanteloup) applied to the Archbishop of Tours to close the priory down. His request was granted and the Babou funerary monuments in the crypt were moved to the church of Saint Florentin in Amboise. In 1863 the mise au tombeau was moved again, this time to the church of Saint Denis in Amboise, which was undergoing a major restoration. The mise au tombeau was restored as part of this project, but in 1975 the way the sculpture was presented was altered and it was restored again more sensitively. The conservator removed internal rusting metal dowels and plaster repairs, stripped the 19th century paintwork to get down to the original paint and render. The figures were placed on a new, lower podium and sections of plinth and background re-rendered as necessary. The new arrangement and accessiblity caused some comment, with fears being expressed about the number of people who would touch the sculpture, either innocently to ascertain the material, or maliciously to graffiti.

This mise au tombeau bears a close resemblance to a similar monument now in Notre Dame la Grande in Poitiers. This group of figures dates from 1555 and was commissioned by René d'Amboise.

Many thanks to blog reader J-L M, who was baptised in Eglise St Denis, for alerting me to the whereabouts of the Babou monument and sending me some useful archival material on the subject.

Rosemary has blogged about the visit we made together with friends to Eglise St Denis here. I've written about another funerary monument connected to the Babou family here.
Posted by Susan at 09:00