The Saviour of the World and Our Lady of Sorrows

The pilgrim hospice (Fr. Hôtel-Dieu) in Issoudun which today houses a museum, preserves in its collection '6 small pictures of enamelled copper' in the former sacristy. They were listed in 1777 as part of the altar furniture, according to the inventory of the furniture and effects of the hospice of Issoudun taken at the time. They date from the late 16th century.

The two most beautiful plaques are monogrammed [L⚜L] as the work of Léonard II Limosin (1550 - 1625). They are a complementary pair and must have been arranged as a diptych mounted on the retable or other liturgical objects. 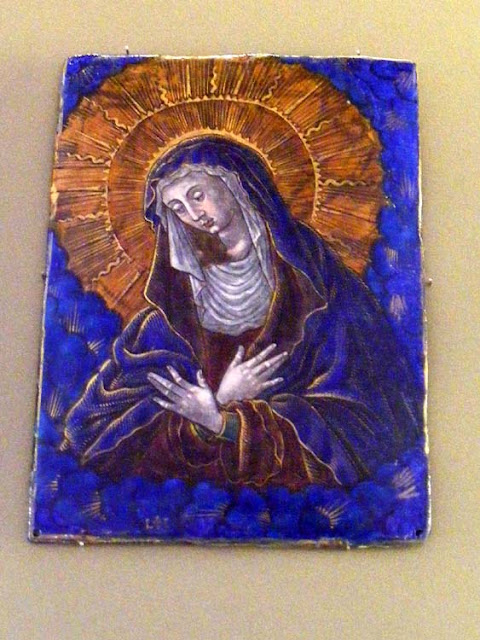 The haloed figures of Christ and the Virgin emerge mid-body from a blue and gold background. Christ holds in his left hand a globe surmounted by a cross, which he blesses with his right hand. He is the Salvator Mundi, triumphant saviour of the world. The Virgin inclines her head to the right, crossing her hands on her breast in a sign of her sorrow. This is the Mater Dolorosa, Our Lady of Sorrows. The two hands crossed on her breast are copied from the famous sculpture by Germain Pilon commissioned by Catherine de Medici in 1586. The impression of great pain and sorrow is reinforced by the expression on her face, the fine draughtsmanship and subtle application of colour giving a grace and feeling of profound contemplation.


We opened one of the Moretti beers we brought back from Milan for apéro. Maybe a mistake -- bottles bought on holiday in the sun don't have quite the same impact when they are drunk in the depths of winter at home.