Orchids in the Touraine 2015

2015 was quite a good year for orchids, although one or two species struggled once it got very dry. This post shows many, but not all of the species I saw during the year. There are several species, in including one I have growing in the orchard, that I somehow failed to get decent pictures of.


Monkey Orchid Orchis simia, April, on the roadside at Humeau. 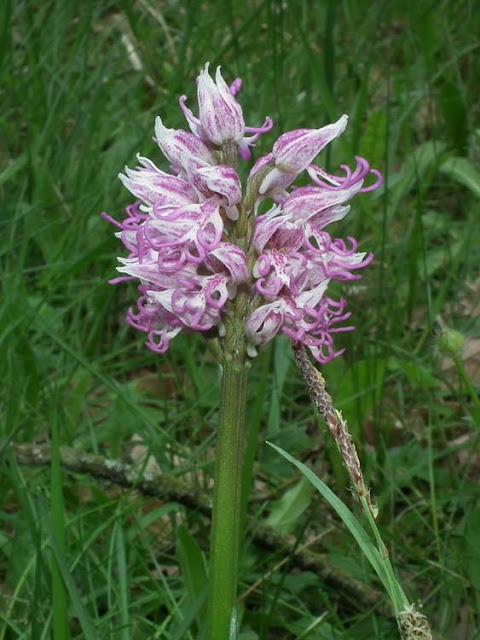 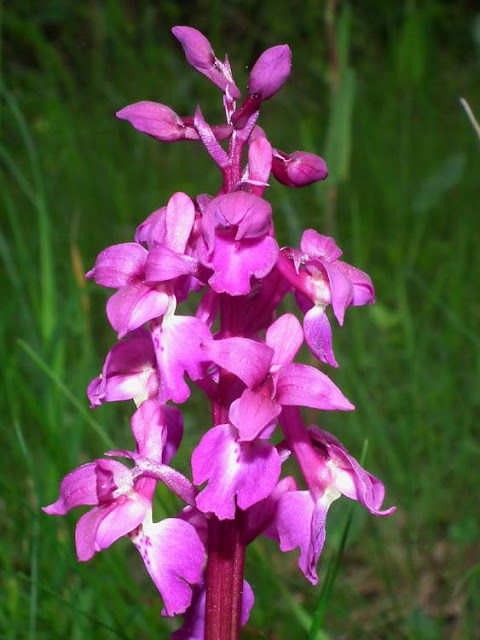 Early Spider Orchid Ophrys sphegodes, May, in our orchard. 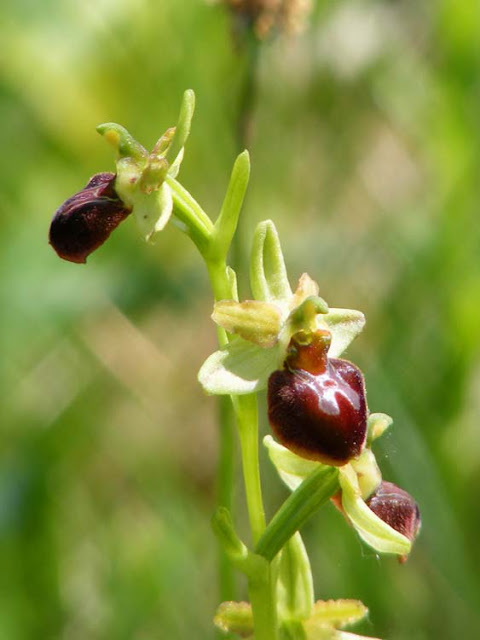 Lady Orchid Orchis purpurea, May, in our orchard. 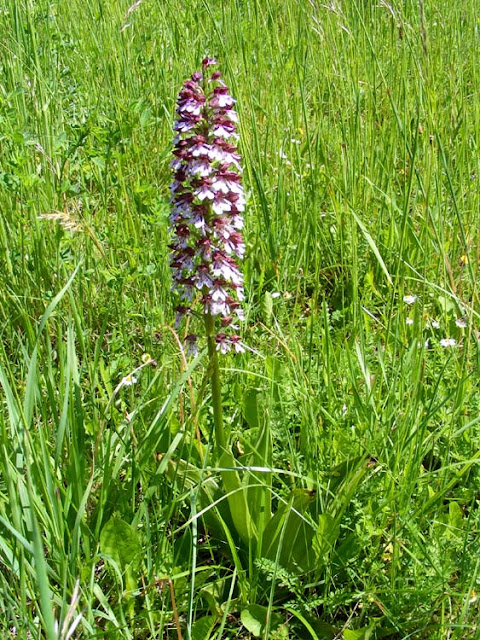 Bee Orchid Ophrys apifera, May, just coming out in our orchard. 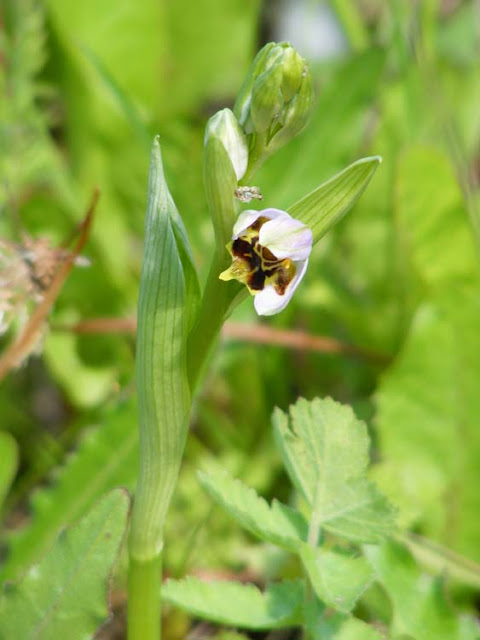 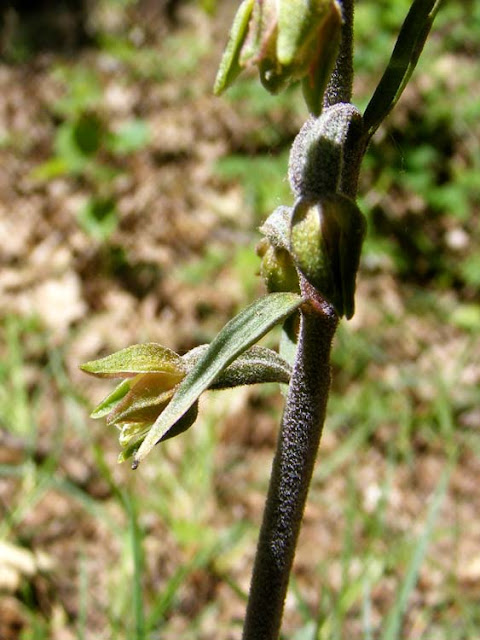 A male digger wasp Argogorytes mystaceus attempting to copulate with a
Fly Orchid Ophrys insectivera, which has fooled the wasp into thinking its flowers are female wasps by emitting a pheromone that closely matches that of the female wasps. This wasp is a well known and important pollinator of Fly Orchids, but not very often observed and even less often photographed in action, so I am quite pleased with this photo. May, on private land at La Muanne, near Chaumussay. 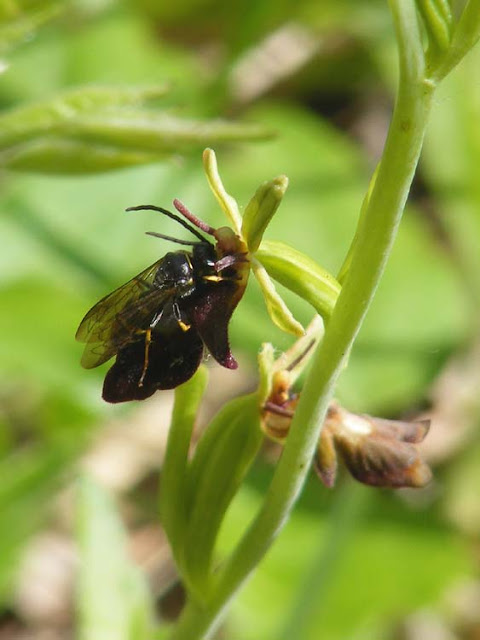 Perhaps the most exciting orchid event during the year was the visit of three National Trust wardens who were researching Red Helleborine Cephalanthera rubra. The species is critically endangered in Britain and the National Trust, Natural England and the Royal Botanical Gardens, Kew, are working to re-establish them. They came here to see colonies of the orchid where it thrives, to gain insights into its habitat requirements so they can improve the species survival and reproduction rate in Britain. Even here the species is rare and protected, so it was a real privelege to be involved with the research. The project is ongoing, with botanists from Kew planning to visit in 2016 for the next stage of field work.

A very distinctive Downy Oak Quercus pubescens marks the spot where a healthy colony of Red Helleborine grows, photographed in May when my orchidophile friend Marc Fleury and I went to check out suitable sites for the British research. 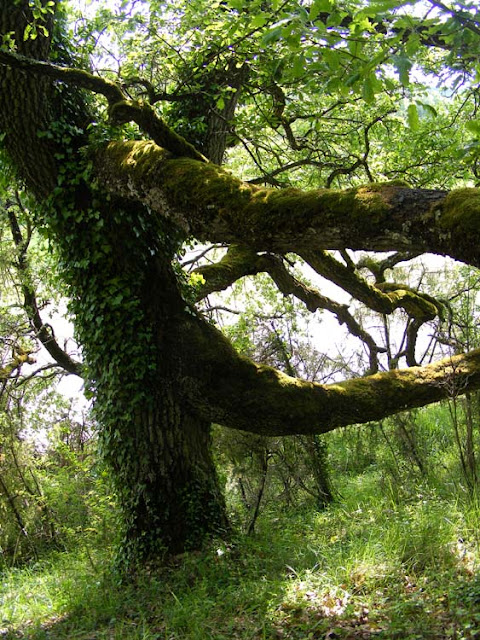 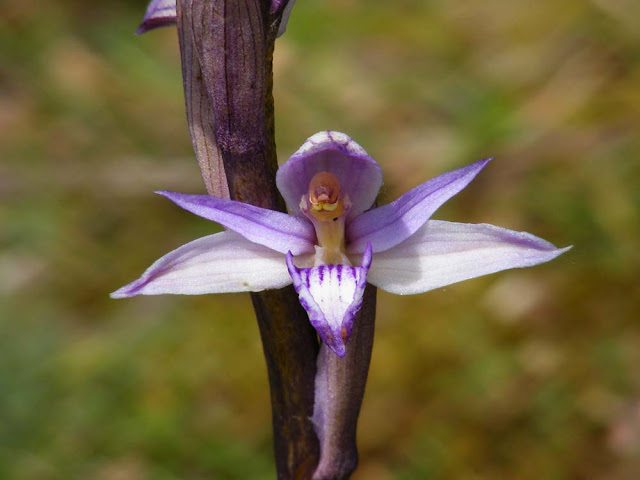 I was intrigued and slightly concerned to see Lizard Orchid Himantoglossum hircinum being used in a church flower arrangement in Azay le Rideau, June. 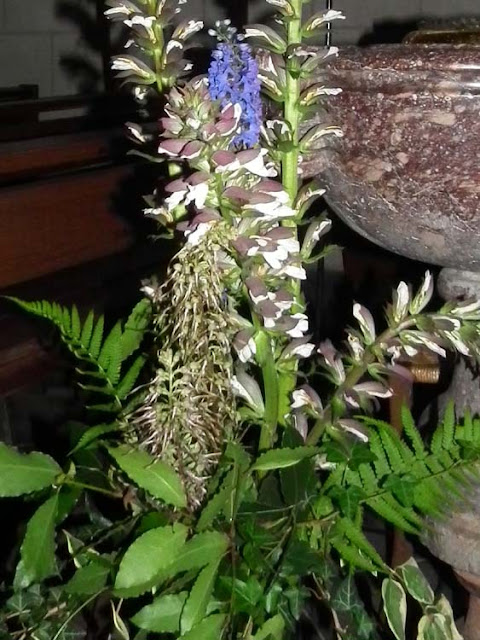 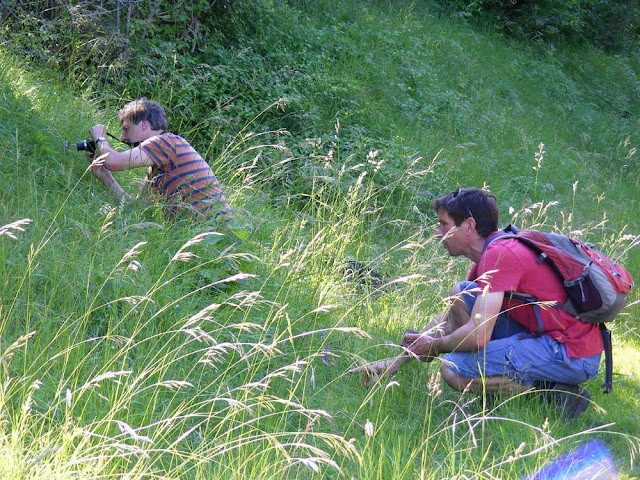 Military Orchid Orchis militaris, June, near Chaumussay. My impression is that this already rare orchid is declining (partly because it hybridises with the Ladies and the Monkeys so easily). 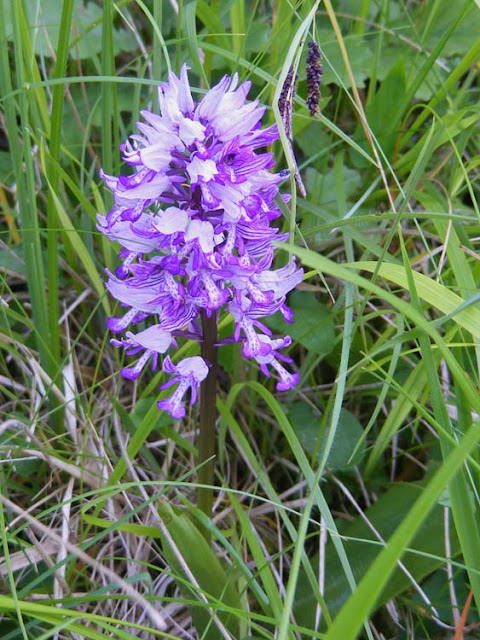 The lovely object of our research: Red Helleborine Cephalanthera rubra, June, near Panzoult. 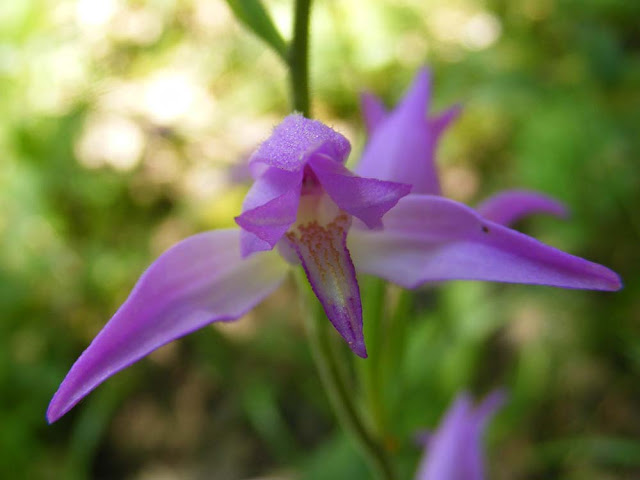 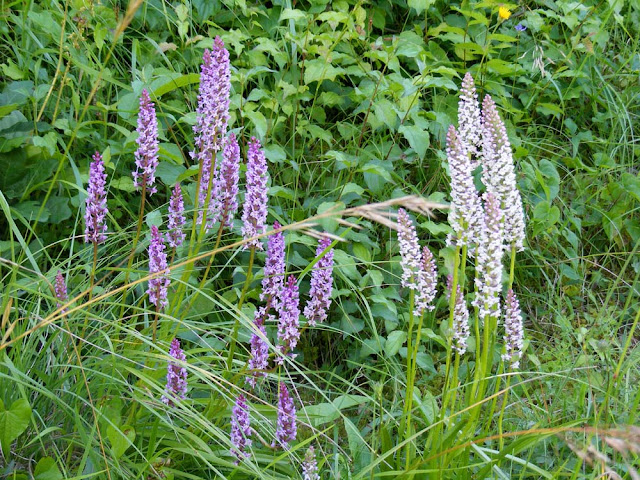 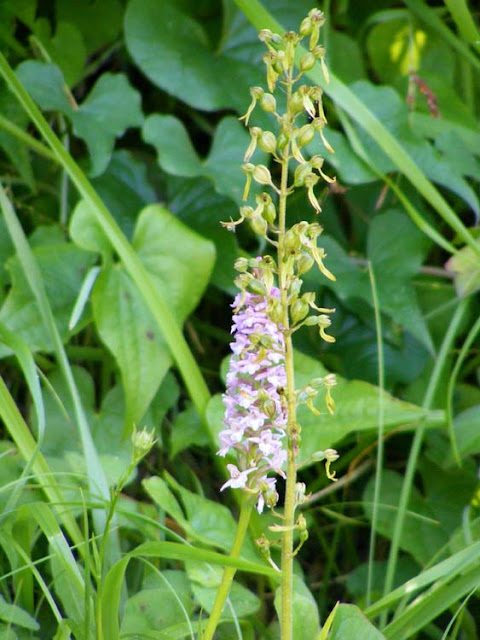 Broad-leafed Helleborine Epipactis helleborine subsp helleborine, showing the effects of the dry weather. You can see the little buds nestling in amongst the foliage, but the tips of the leaves are brown, a sure sign of drought stress. In the end this plant did not successfully flower. July, in our orchard. 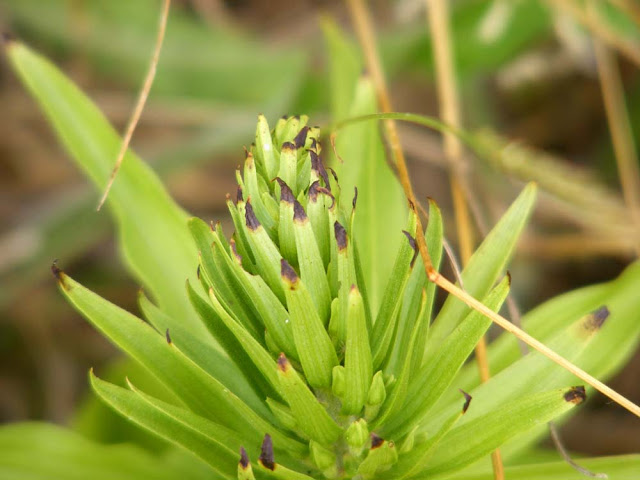 Autumn Lady's Tresses Spiranthes spiralis, the last species to flower in the Touraine. This one, in September, is the lawn at the home of friends near Bossay sur Claise. 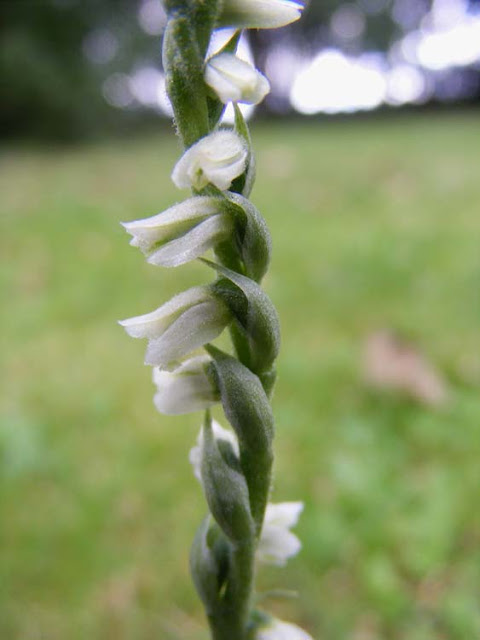 The elderly lady customer in front of me at the rabbito's requested that he remove the eyes from head of the rabbit he was cutting up for her. He gouged them out, then skilfully chopped and sliced the rabbit into about a dozen pieces, including the head, which all went in a bag for her. Others in the queue commented that it was a lot quicker than doing it yourself.

And speaking of lagomorphs, before the market I went to the pharmacy because I run out of lip salve. When the pharmacist asked me what I wanted I said I needed something for mes lièvres. In a completely matter of fact tone one of the other customers corrected me. 'Les lèvres', she said. For some reason I frequently use the wrong word for 'lips'. What is odd though is that I have never to my knowledge used lèvres when talking about hares.