Rue de la gare translates as 'Station Street', and as you would expect, Chateauroux railway station is indeed at the end of the street. But that is not the only building of note in the street. Three of the buildings on the right, as you proceed towards the station, are superb examples of the carpenter's art, and all are listed as Historic Monuments.


Looking down rue de la gare towards the station. 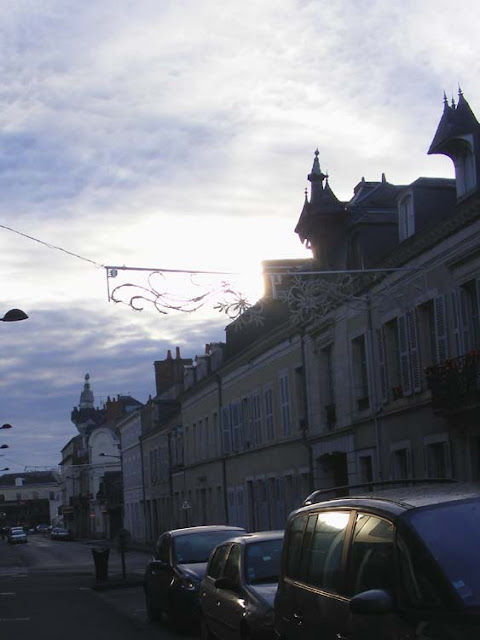 Numbers 12/14, 50 - 58 and 72 rue de la gare were built by the master carpenter Hippolyte Moreau, known as 'Berry-la-Conscience' (a rather odd nickname which was his 'secret' Companion name and which I think has the sense of something like 'the Sage of Berry'*). Moreau was born in 1822 and died in 1900. He created the extraordinary rooflines in rue de la gare from 1871 onwards. According to Patrimoine de France [my translation] 'these dormers (Fr. lucarnes) that he installed acted as a sign on the family houses of the street, translating all the fantasies and difficulties of his trade, and condenses, like a sort of testament, all the science of his training. That is to say, all the knowledge of how to design in three dimensions, learned on a Companion's Tour of France.'

The eastern corner of 12/14 rue de la gare and the corner of rue Ledru Rollin. 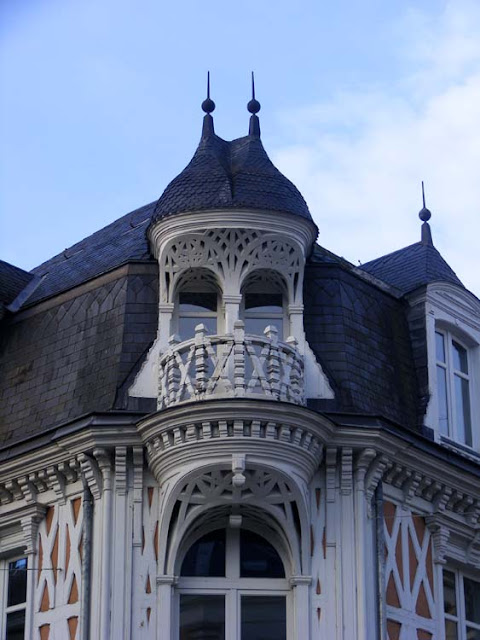 Moreau was an entrepreneur, in business with his brother-in-law Armand Viraud, who specialised in public works. Together they tendered and worked on all the major public works in Chateauroux in the last decades of the 19th century.

Corner of 12/14 rue de la gare and rue Ledru Rollin: This building suffered a fire in 2001 and has been restored subsequently. The ground floor is stone but the first floor is entirely timber-framed (Fr. colombage) with the timbers set in Saint Andrew's crosses. It dates from the second half of the 19th century. The footprint is rectangular, with the east facing corner cut off. It is a house, with a ground floor which is a shop, then the first floor and attic accommodation. The house is of great architectural interest because of the ornate carpentry of the main roof and the roofs of the first floor French windows (Fr. portes fenêtres). The central French window on the rue de la gare side is paired with a capucine balcony with banded balustrade, a capucine, flanked by capuchin ties brought together by a cantilevered Saint Andrew's cross. A double capucine lucarne sits above the balcony and under the projecting cornice there are four triangular pediments topped by a polygonal roof. On the cut away eastern corner a double guitarde dormer is supported by a guitarde balcony. The attic includes two domes which meet in a V, fitting on to the straight end of the main attic. 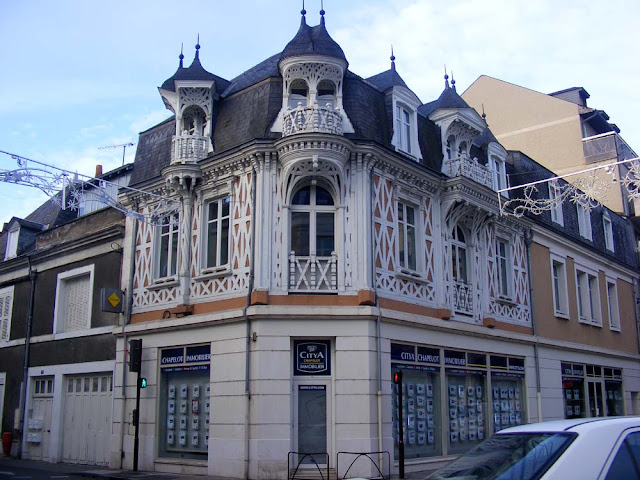 On the rue Ledru Rollin facade you can see a split capucine covered balcony cantilevered above three posts, the centre forming a corner. Five wooden brackets carry the cantilevering in a semi-circle and fall back to a twisted fluted column. The two capucine roofs are decorated in the Empire style. 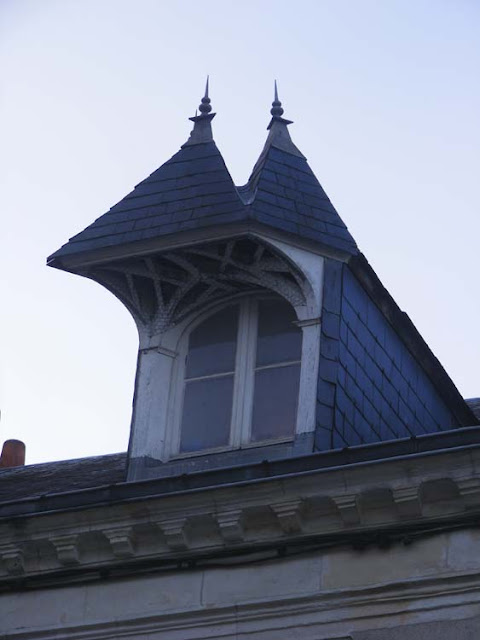 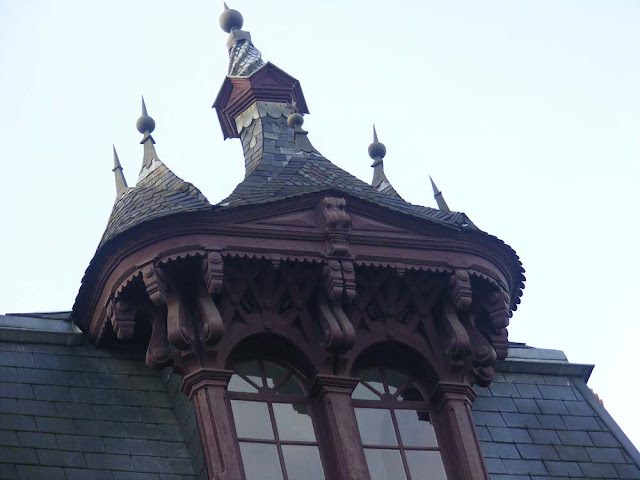 72 rue de la gare: The main lucarne carries the inscription UVGT, which stands for the symbolic values Union ('union'), Vertu ('virtue'), Géometrie ('geometry') and Travail ('labour') of the Compagnonnage du Devoir (trade guild), and the phrase 'Honneur aux Arts' ('Honor the Arts'). It dates from the third quarter of the 19th century, probably 1871 and is privately owned. Rising three storeys above a basement its facade presents five regularly spaced bays including a main central section. The principle interest in the house resides in the central carpentry emerging from the attic roof and the front wall, creating a series of spires and skylights. The complex design of this dormer is a style called a triple capucine, being a square tower covered with a pavillion roof on to which are attached separate attics of different forms. The roofs of the large attic, pyramids and polygons, are in straight set slates. Those of the small conical attics and the dome off the facade were treated more decoratively, but over the years various restorations have not always been true to these schemes. Graduated, arranged in bands, these slates can be straight, cut as scales or set on point. All these roofs had pointed finials. 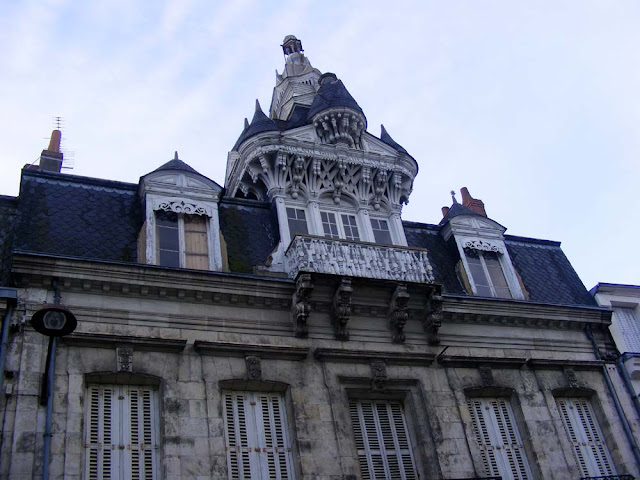 This fabulous building turns out to be for sale, something I didn't know until I turned up to photograph it for the blog. I see from the pictures on the real estate agent's listing that not only is it special on the outside, it features one of the great gifts of the French to interior decoration -- wallpaper that goes up the wall and across the ceiling. 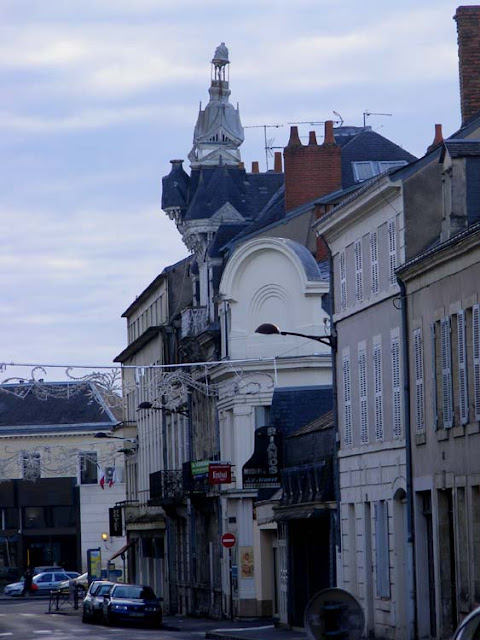 While I was photographing the house a couple on their way to the station stopped so as not to photobomb me. As a result we struck up a conversation. They said they would never have noticed the amazing roofline if I hadn't been crouched on the pavement photographing it. They were well pleased to get a little serendipitous architectural treat.

*Chateauroux is in the old province of Berry.

For more about lucarnes, guitardes and capucines see my post Guitars in the Windows.

Email ThisBlogThis!Share to TwitterShare to FacebookShare to Pinterest
Labels: Packet of Three, Roofing, Towns and Villages near Preuilly

This style is not one I particularly like, but the craftsmanship is fantastic and well worth its designation as a national treasure.

I really enjoy their combination of utterly pointless frivolity from an aesthetic point of view and the tremendous skill that goes into designing and building them. Sort of Fabergé for buildings.

Carpentry for carpentry's sake...fascinatingly weird.
Oddly enough it would sit well in Costa Rica....
I could not resist clicking the link to the advert...ah - the delights of allover wall paper...but how did they miss out on wallpapering the doors too?

Yes, they are clearly not really taking the wallpaper thing seriously -- they didn't even choose a directional paper and go up one wall and down the other...

Fascinating stuff. And I, too, don't get it about the allover wallpaper. Was it a national industry that needed to be supported? Lovely hallway in that house, though.

To be fair, the house is considerably nicer inside than I expected it to be.