Up Up and Away

It was 30 years ago today that I embarked on the most adventurous trip I had ever been on. I had been working for the Australian Government for 10 years and qualified for an additional three months fully paid Long Service Leave. No way was I letting that pass unnoticed.

So I asked my college friend Hugo if he wanted to explore Europe with me. Hugo is from Chile, and said yes... as long as we went to Chile as well. That was unexpected and not something I had ever thought about doing, but it seemed like a good idea so we made plans. In those days flying to Chile from Australia meant transiting through either the USA or Argentina. We chose Argentina because... actually I can't remember, but I think the alternative would have meant flying to Los Angeles, changing to a flight to Miami, and flying on from there.

I kept a diary of the trip which today makes interesting reading, being filled with minutiae such as every foodstuff consumed, exchange rates and prices. I was good on detail, not so hot on the big picture. Luckily I have photos to remind me where I went, so here goes...

That's me at la Boca in Buenos Aires. 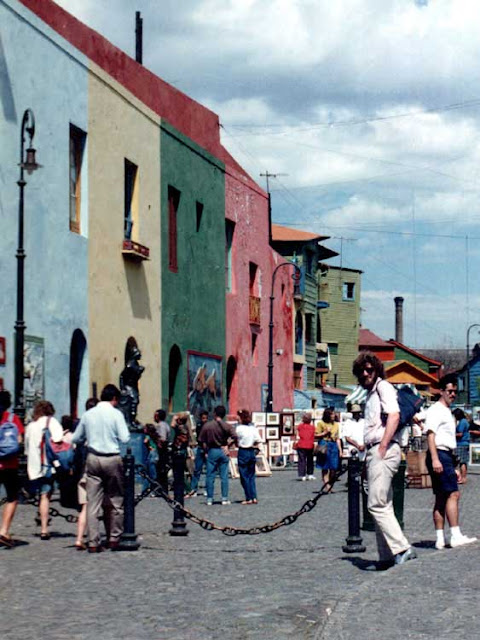 We arrived in Buenos Aires mid afternoon, checked in to our hotel, explored the area, then stopped for "Oncé" (at least that's what my "South America on $20 a Day" called it, the rest of the world calls it "Merienda") of pizza and beer. It turned into a 3 hour session of pre-dinner people watching because we had to wait until Hugo remembered how to ask for the bill (cheque), which came to $4.25AUD. We then had dinner of "Huge rib eye fillet steak & chips, bottle of beer, bread and butter for ₳116,000 ($29AUD) for two". We were amazed to see shops open at midnight when we emerged from the restaurant. 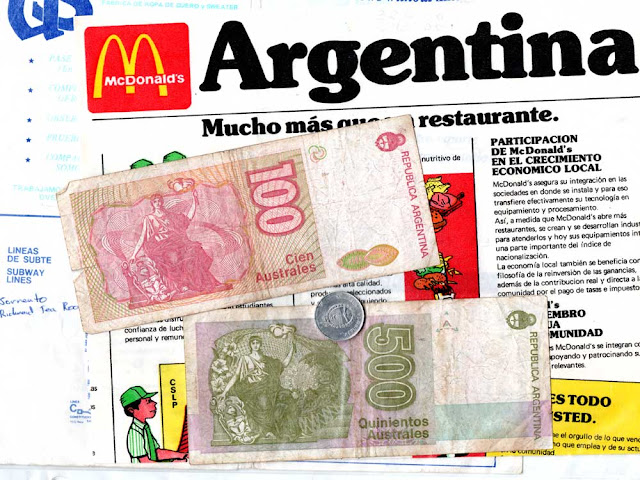 The next day we did a half day tour of Buenos Aires which included "parliament house, plaza de Mayo (Cathedral), la Boca (Italian section), and other sites", and some shopping. Interestingly, there is no mention of lunch, but I do have an Argentinian McDonalds placemat in my collection. Dinner was "Kidneys on skewers cooked at table - waiter not sure he should serve them to us".

The next day we flew to Chile. Our flight was delayed because "there is only one tractor at the airport to move planes". I can remember seeing a Pan Am 747 sitting at the airport, the last time I saw a plane in Pan Am colours - the airline was declared bankrupt 4 days later. I wrote in my diary "just as the Andes come into sight pilot announces descent into Santiago. Mountains v. impressive - they just suddenly rise straight from what appears to be from the plane to be desert".

The Andes from the plane. Better Andes photos will follow 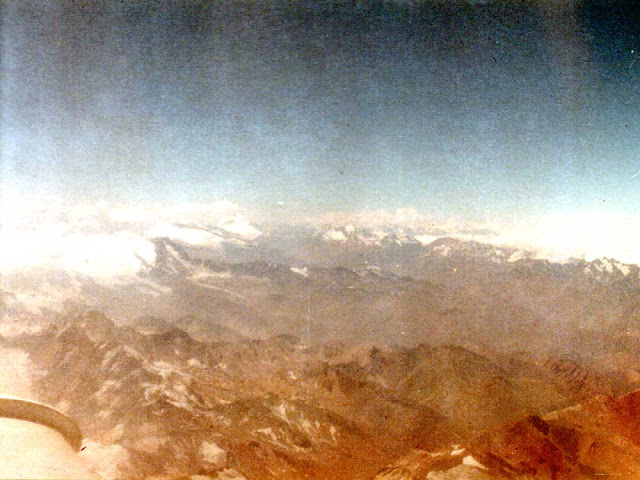 Yes, I have some Australes banknotes. No, they weren't worth much: $1US equaling ₳5890. That makes the notes above worth 10c in total...

Simon, you are off to a good start. Travel diaries can be so interesting to read later (especially when you've forgotten the details) and I know your take on Chile and Europe will be uniquely yours.

Your friend had forgotten "check, please" in his native language?

I had to look up Austral. It had a fairly short life as the Argentinian currency.