When we returned to Santiago we had a couple of days to shop for presents for people back in Australia, see some sights we had missed first time round, and for Hugo to catch up with various members of his family. The only sight I really remember visiting was Santa Lucia Park, which was highly rated in South America on $15 a Day. It is really quite pretty, with a view over inner Santiago and plenty of fountains (from memory) but we appear not to have taken any photos of it. 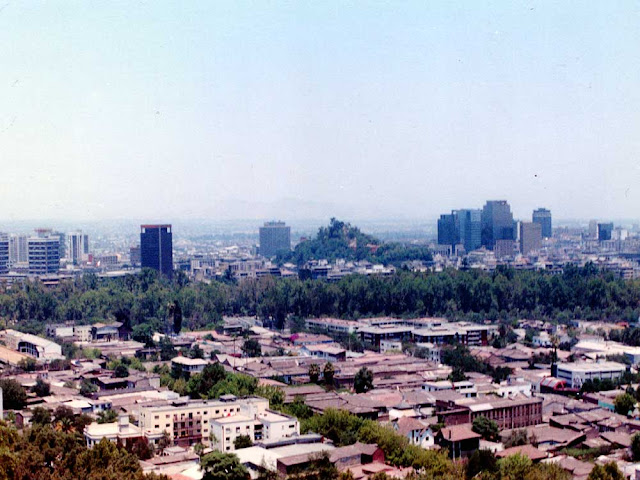 We also visited an artesania - the artisan markets where it appears we bought many gifts. Who for and what will have to go unrecorded (as they were back then).

There are a couple of other things that went unmentioned in my diary. One day we passed near to the National Stadium a place of unmitigated horror for many people during the Junta, and in the evening we watched Sam Neill dubbed into Spanish on TV (my diary says Brian Brown in Kain and Abel, but there was no way of researching it back then).

On the 23 January 1991 we took the bus to Santiago airport, to fly back to Buenos Aires for a couple of days: "Check in then through to transit lounge. DISASTER!! - very worried airline rep asks if I am 'Mr Simon'. He tells us that they have checked through 3 bags but can find only 2. We are then taken out to to the plane and climb up the luggage loader into the belly of the plane where we rummage through the baggage compartment until we find the bag. I have always wondered where it all went".

We were 30 minutes late leaving Santiago "all because of us" but I am interested that despite Operation Desert Storm having started earlier in the week there was no heightened security at the airport.