It's Chile in January

On the 4th January 1991 Hugo and I arrived in Santiago de Chile from Buenos Aires and were taken to his Aunt Teofila's house in Florida. According to my diary "Huge mountain appears to be just outside door". We had dinner and a snooze, then supper, before going to bed at midnight.

Huge mountains appearing just outside the door. That's the Andes 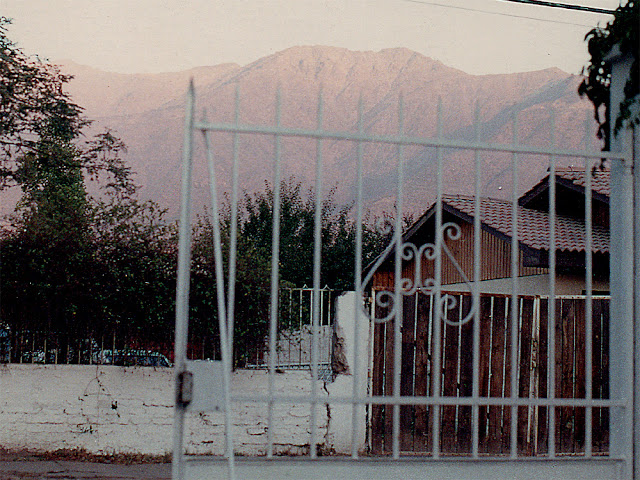 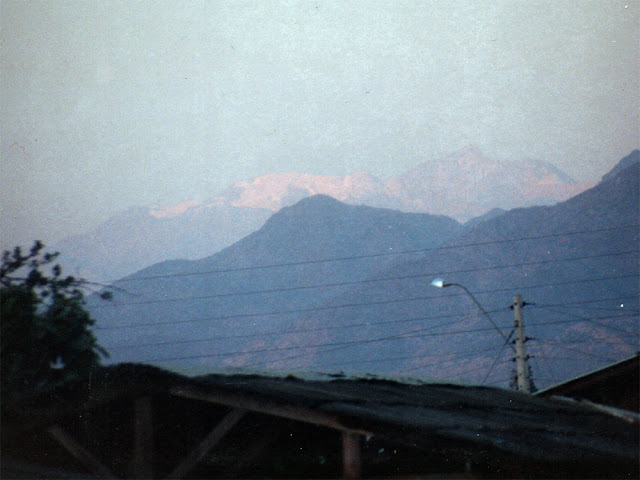 The next day we caught the bus to the centre of town for sightseeing. The buses were bedlam - not far from Aunt Teofila's house was a main road, served by a number of bus lines. All the buses were old style Mercedes (like this) and driven by people who thought that Fangio was a wimp. It was like Ben Hur on steroids as they raced each other to the next bus stop in order to steal each other's passengers. Madness, but cheap, and commented on frequently in my diary.

With Hugo's Aunt Christina we visited the Presidential Palace (still showing the scars of an aerial attack in the coup of 1973) and the Old Parliament. The Old Parliament Building was now the National Art Museum, re-opened only a month earlier after having been closed by Pinochet. 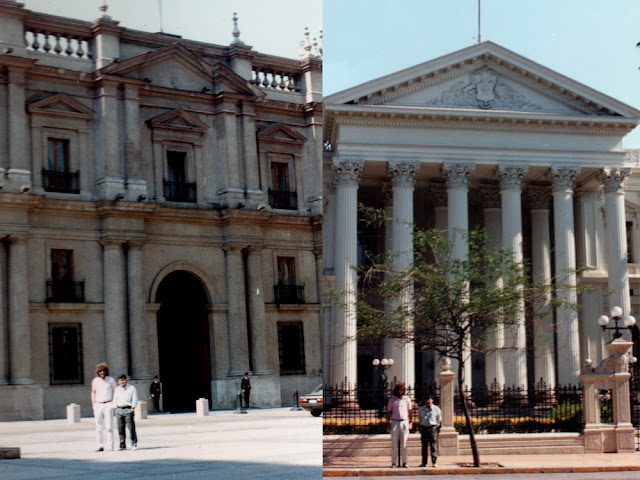 We also booked a nine day tour of Southern Chile at Aunt Christina's favoured travel agent, before dinner and the bus home.

The next day we went to Cerro San Cristobel, the hill in the middle (more or less) of Santiago that's crowned by a large Madonna. We went up (and down) by the funicular railway, then went to yet another of Hugo's Aunt's (name not recorded) for dinner. Four hours later, as my diary notes: "DISASTER!! Struck down by the gyp. Try to eat dinner, but no good. Have a sleep then spend hours in toilet. Given a lift home by Hugo's Grandfather. Immediately to bed." This was despite only drinking soft drink or beer, and all of Hugo's aunts washing the salad in boiling water just to be sure.

The Madonna, not helping. 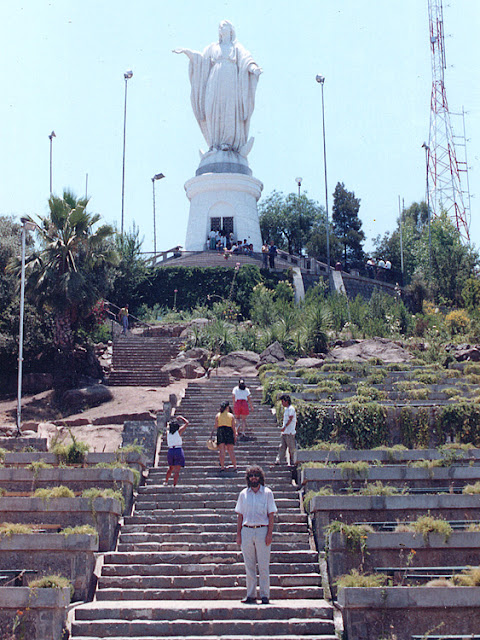 The next day I spent drinking lemonade, taking tablets and... well, you really don't want to know.

The day after that (8 January); "OH NO!! Now Hugo's struck down as well!!". We went into town for a very brief visit anyway, We were possibly delerious because the bus ride must have been... provoking... I do remember that after we got back to Florida we went to a soft drink bottling plant just around the corner and bought a crate of fizzy goodness

The next day was also quiet, punctuated by a quick trip into town to collect our tickets for the tour. We stopped for a hamburger and beer in a quaint restaurant where you had to prove you were a customer before you could access the toilets. Not to get the key - we had to show the table number to the cashier, who would them give you 4 sheets of toilet paper. It wasn't long after that we started taking our own toilet paper everywhere.

Next week - Lakes and Volcanos.

In our camping days we got into the habit of always having toilet paper with us. I used to buy the stuff that's folded into a block rather than in a roll as it could be concealed in a little bag more easily. Campsites rarely had sufficient supplies. (I suspect that people helped themselves to the whole roll.) It's something we have continued with over the years....you just never know when a holiday is going to take an unfortunate turn in the tummy department !!

It is a good idea to always have tp about your person or in the car.

We have it in the car boot even now, it was a must when travelling in France...

Yes, it is not uncommon for French public toilets to be tp free zones.