Chile at the Beach

30 Years ago I was in South America with my mate Hugo.

Because Hugo had plenty of family in Chile we had no end of options of people to visit. One set of his cousins had rented a holiday cottage at Quisco, on the coast 100km from Santiago.

"Wake at 5am, catch the looney bus to the central bus station. Catch Pullman Bus to Quisco to coast house rented by Hugo's cousins. Countryside looks dry and poor. Got to coast to find it cold and foggy."

What amazed me was the amount of eucalyptus trees. The countryside looked very much like the inland areas of NSW (not the deserts). The weather is very much influenced by the Humbolt current, which carries cold water up the east coast of South America from the Antarctic, so even when it's sunny the water is extremely cold, which is good for fish and shellfish, but not to this Australian's tastes. 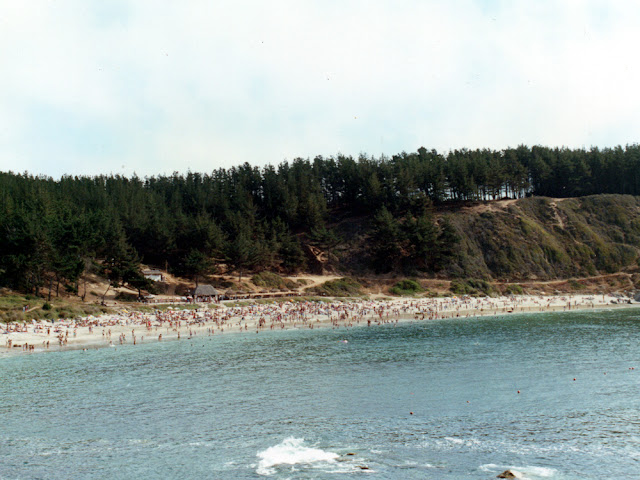 "Have lunch of shellfish soup (V.good), followed by rice and veges. Take a walk to the beach. Funny to see everyone all rugged up and playing tennis. Walk to the shops, buy beer and steak for a BBQ. Forgot to mention there is no running water." 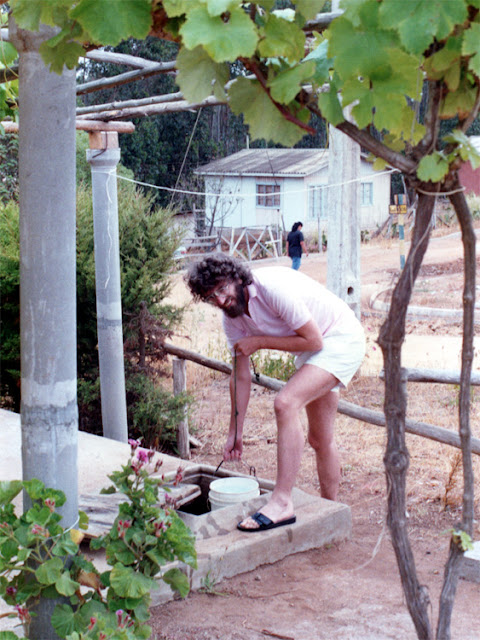 "OH NO! Not Again! Struck down during the night Spend 1/2 hour on the loo then have to take a trip outside to the well so that I can fill the cistern and flush the loo. Take Flagyl and go to bed, sleep until 3.30pm. More Flagyl, and find the BBC World service on the radio"  And that was that day done. Did a little walking and then back to bed.

The next day we caught the bus back to Santiago, where we unpacked our overnight bags from the coast, and repacked for a 12 hour train trip south to Valdivia. We decided to treat ourselves, so booked a meal in the restaurant car. "At 10pm have a coke in the bar then go to restaurant. I have steak, Hugo has chicken, and we share a 1/2 bottle of white wine. Costs 4,200pesos ($16.80AUD) Back to seats (via loo as gyp still present). Find 2 empty seats so I can stretch out a bit."

The Andes from the train. 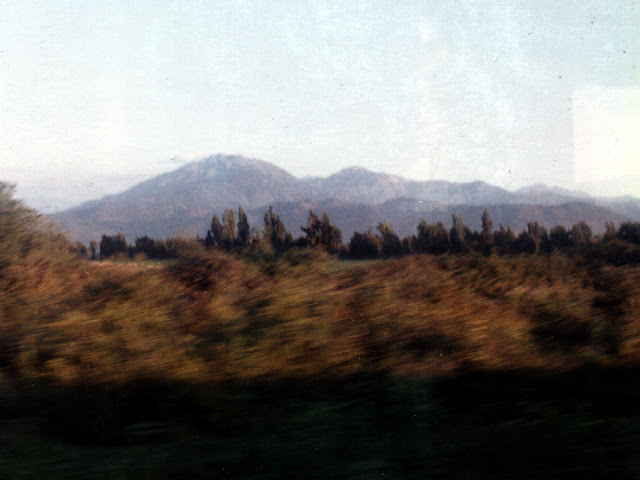 Valdivia is 850km from Santiago, and the train trip took us 14 hours of rocking (mainly) and rolling (slowly). The train lines had only recently been reopened after the return of a democratically elected government after being shut by the Junta, and the carriages were very much "as found". Faded glory would best describe it. "After "sleeping" on the train arrive Valdivia at 10.20. Met at Station and transfer to Hotel Melillanca. BLISS. Hot running water (the first for 9 days). Hope the hotel can afford the excess water bill".

Next week, our 9 days in the South.

Simon, I'm really enjoying your memories. The things we do when we're young! Maybe instead I should say "the things we can do when we're young" because I sure couldn't travel now the way we did then. I'm grateful to my younger self for being more adventurous. In spite of your digestive system going out of whack, you seem to be having a great time.