I have fallen behind with my tales of Chile 30 years ago, so I will be posting twice a week for a while.

Once we arrived in Valdivia we checked into our hotel, had what felt like hour long showers, then walked into town for brunch "coffee & pizza at Munchen Coffee House - 1600pesos". The weather was  fresh, even in the middle of summer.

The afternoon was a bus tour with the group we were travelling with, looking at some of the damage done by the 1960 earthquake. Valdivia was once a walled town aiming to keep out both the Amerindians and the English, and some of the towers still exist. We also visited the Botanical Gardens and the Local Museum (no details of what we saw, I'm afraid). The bus took us back to the hotel, and we walked into town for dinner "Dine at "Dinos" - chicken soup & fish & chips. Chiken soup is clear with 1/4 chicken in it, The fish is a slab of salmon. Complete with 2 beers 3180pesos - about $12AUD".

One of Valdivia's towers (and a hairy bloke) 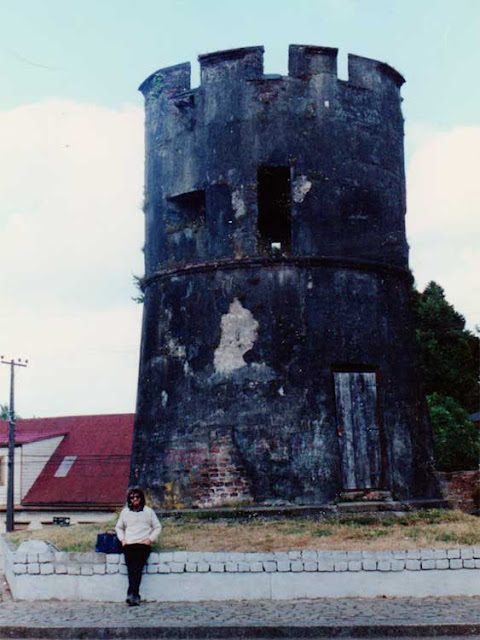 We were excited that even 31 years after the event,
the corrugated iron repairs to buildings were holding up. 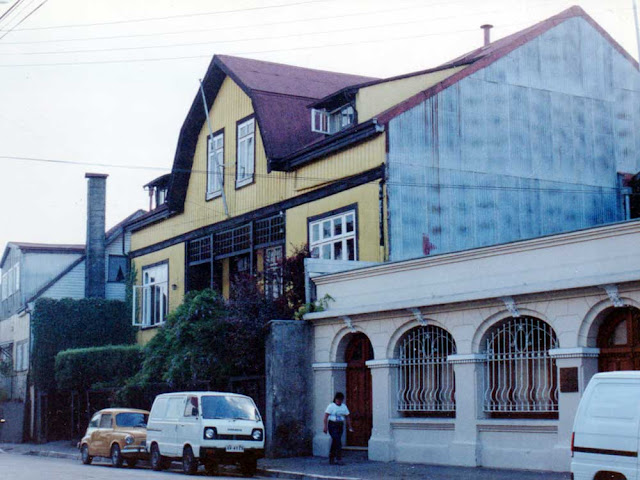 "Up & brekky, into town to post letters, walk around fish market & vege market, take photos". We then returned to the hotel and went on the bus to the ferry terminal for a cruise down river. Lunch was on the boat "eel soup, shellfish with chicken and sausage" - with no price shown so I assume it was included. We first visited the fort which guards the entrance to the harbour, then across to another headland to see the ruins of the govenor's house. Having had a big lunch we settled for a pie and coffee for dinner. My diary notes "still got crook guts". 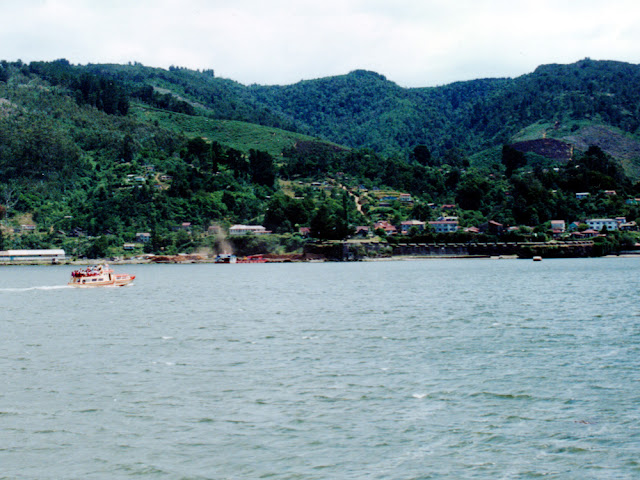 "Wake early (7.20) pack and brekky. Catch bus to Puerto Varras via Orsorno, Futillar, Llanquihue (prom Yankiwi) to "Grand Hotel Puerto Varras". The hotel was once an art deco beauty, but that must have been the year it was built. Our room was huge, with an enormous bathroom, but the hot water was a trickle - on one occasion we set the bath to run then went to the bar - when we returned to the room the bathroom was full of steam and the bath was  half full. I am glad to see there has been work done since, even if it has probably lost some of its "character".

The next couple of days involved mountains, volcanos, looking at lakes, and playing the poker machines (yup - the hotel was also a casino). My diary is pretty uninspiring reading, mainly a list of food, and complaining about my stomach. You can tell it was bad: Hugo and I were sitting in the restaurant trying to eat our way out of  feeling sick with a four course meal and a different bottle of wine with each course, and I have not only mentioned the meal, but I didn't mention that the "background music" that night was a simultaneous translation into Spanish of the CNN commentary on the first night of the bombing of  Iraq in "Desert Storm". 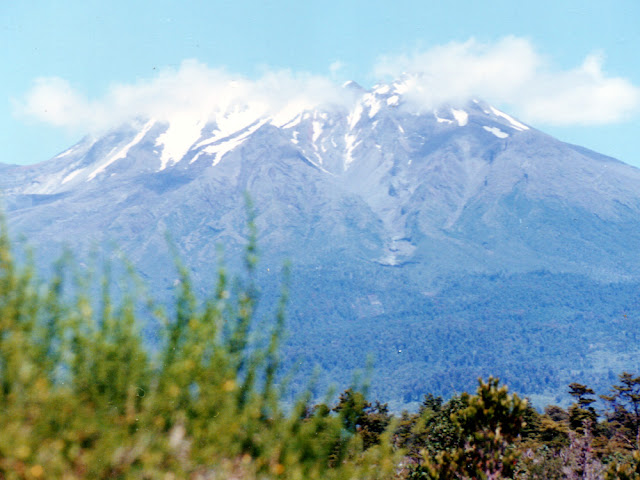 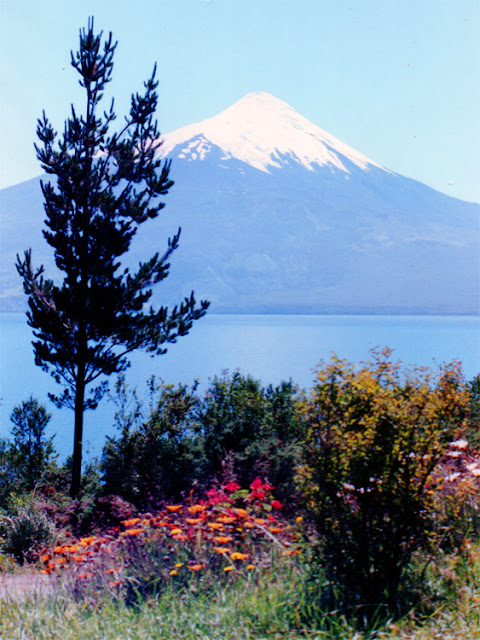 We left for Santiago after 4 days of touring the lakes. The Andes are truly spectacular (even if there really isn't room here to show them properly) and we took about a hundred photos (36 shot rolls, so expensive). The train trip back to Santiago was 1040km, which took a shade over 20 hours, all on very uneven tracks. When I mentioned that to one of Hugo's uncles he looked surprised and said that was quick, because often the train derails....

Interesting. Chile is on my list, particularly the Chilean Fjords. Love the last pic