If you walk up from the carpark on the river in Azay sur Cher towards the church you will first cross a small tumbling stream on its way down to meet the big river. Then you will encounter a looming medieval tower, which entirely obscures the view of the church.

The tower is the old seigneurial lodgings, a vestige of a 12th century defensive castle, and is often referred to as the Chateau d'Azay sur Cher. The old square castle keep is three storeys high, plus attic, with 17th century chimneys. It is flanked by a turret which is octagonal at the base, becoming cylindrical at the top. The keep would have originally had crenellations and machiolations, but in recent times has been topped by a four planed roof. A few metres away there is a semi-circular building, presumably an old chapel.

Guillaume Maingot, Lord of Surgeres and Azay, who participated in the Battle of Bouvines in 1214, when Philippe Auguste defeated John Lackland, is the first known owner, and it remained in his family until the 15th century. 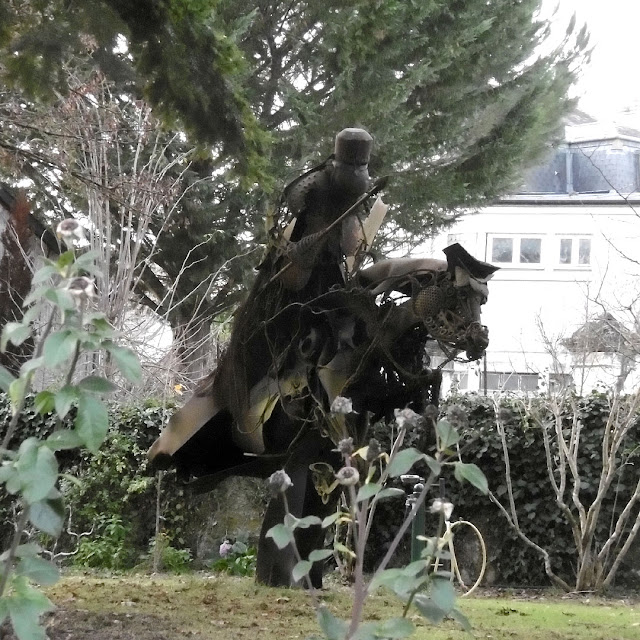 In the garden is a life size sculpture in found metal of a knight on horseback. The sculptor lives just across the river. HL Bergey [link] originally trained as a ceramicist and worked at Sevres. He is self-taught as a sculptor and now runs workshops as well as accepting commissions.

You should put all these posts together in a book as a "specific information book" about castles and other places of interest in the Loire Valley. Would sell a few one would think.

I'm dubious one would sales to be worthwhile. Not enough people care about the details of lesser chateaux as a group, and nobody pays for that sort of info these days.