On the Wednesday before Brexit I got a call from a young journalist, Lisa Darrault. She was working for La Nouvelle République, our main local newspaper, and Xavier Roche-Bayard had given her my number. She wanted to talk to British nationals who resided permanently in France, to get their thoughts and feelings, now that Brexit was actually going to happen in just a couple of days. 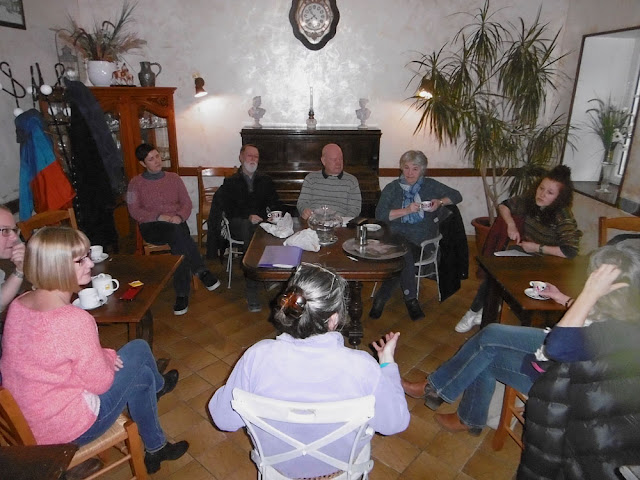 I arranged with her to meet at Hotel de l'Esperance, opposite the Abbey in Preuilly. Then I emailed all my British contacts and asked if they would be available. I was very happy to get some positive responses and a few people who turned up unexpectedly. A couple of people, like Nicole, I particularly wanted to be there. Nicole is articulate and most importantly, has secondary and tertiary education aged children. I particularly wanted to get across to the journalist how the younger generation was going to be affected, and Nicole related her family's experience beautifully. Her family is typical in many ways, and I was very touched by her point that she and her husband are doing everything they can to mitigate the effect of Brexit on their children. Despite Brexit not even being a thing when they moved to France 15 years ago, they do not want their children to be disadvantaged by a decision their parents took years before. Nevertheless, time will tell how easy it will be for Nicole's children to study and work outside of France. The chances are that they will be passed over because, not being European, any application by them will involve more paperwork, because they no longer have the right to live and work anywhere in Europe -- only in France (and the UK, but they need to be careful about that too, as it could result in them no longer having the right to return to France if they are away too long).


I was also happy to see Alan present. He is one of the few Brexiteers that I know and I thought it was valuable that he was there to present the opposing view. In the end feelings ran very high and I asked him to leave, but personally I thought he was very brave to have turned up at all.


Kath, with her fluent French and background in European political studies; Jim, who wrote out several pages of useful notes; Pauline, who ensured the journalist knew that Britain was more than just England (and her homeland of Scotland is staunchly Remain); Dave, whose calm focus reined us in more than once and got us back on track; Simon, who has been a member of some of the more militant Remain Facebook groups over the past three years and had statistics at the ready; Richard, who spoke of his dream to live in France; and Alison, who has only been in France for a month. They all contributed to a lively couple of hours, rounding off the final day of the young journalist's contract with La Nouvelle République. Plus she spoke to London Bruno on the phone to get his views, as a Frenchman who has lived in the UK, on the issues. We all wondered how on earth she was going to whittle down what we said into an article.


In the end she did very well. She did choose to ignore the opposing views expressed by Alan, but I know she was interested to hear them, and it did give her some insight to the broader picture, I'm sure.


Thanks are due to Ginette, the landlady of l'Esperance, who allowed us, at short notice, to occupy her salon for two hours for nothing more than the price of a dozen or so coffees.

Here is a link to the article (in French), and another (in English) which is being hailed as the best overview from a Remainer to date.

Well done you. Wish we could have been there, as the plight of second home owners and part time residents of France is just as perilous but in a different way. There are thousands of us, all contributing significantly to the economic and social aspects of life all over France for up to six months every year.

The links are there and work for me. Run your cursor over 'link to the article' and 'another' to make them stand out more obviously.

I know. This was one of the few topics relevant to Brexit that we didn't cover, partly because there was no one to represent this group. But I suspect the journalist would have left it out anyway, as adding another layer of complication. It's kind of a separate topic in its own right.