Moss Outing to an Abandoned Vineyard

On Sunday 22 February Franck the Forestier led an outing to an abandoned vineyard near Antogny le Tillac. It was up on the heights behind the village, overlooking the Vienne Valley. Like many of these ridges, created as the Vienne moved around and changed course over the centuries, there is a fair bit of sand and flint in the clay soil. 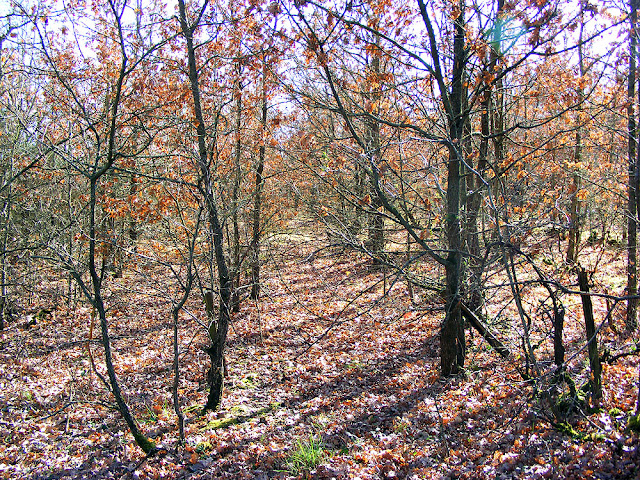 The rows of vines are being succeeded by Downy Oak. It looks like they have been planted and at first I thought it was a truffle orchard. But the oaks have simply propagated naturally in this pattern following the vines. 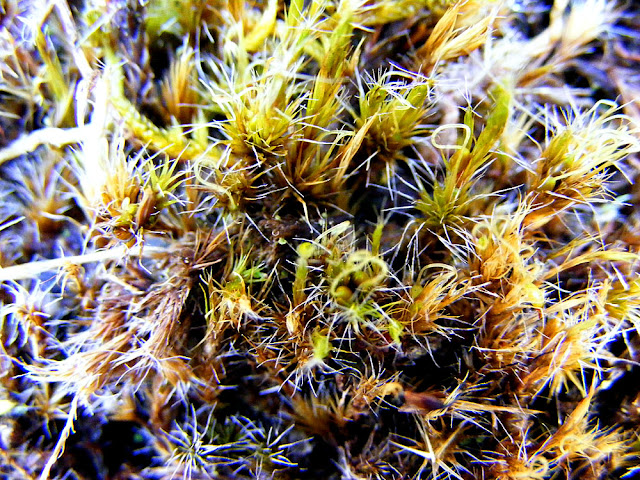 
Franck explaining the finer points of moss identification to Michel. 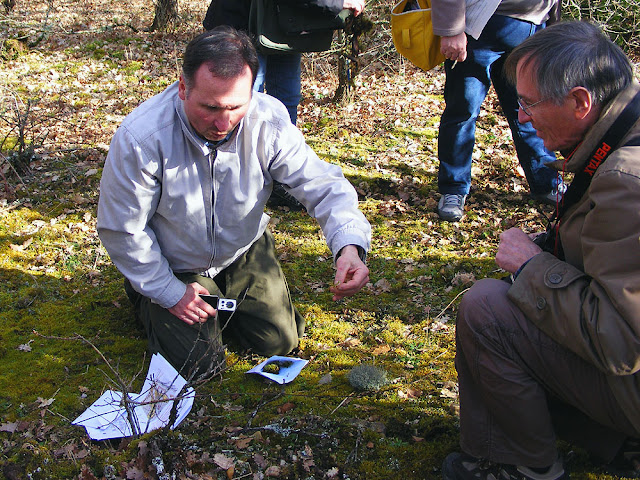 One of the most abundant arboreal lichens, Parmelia sulcata. 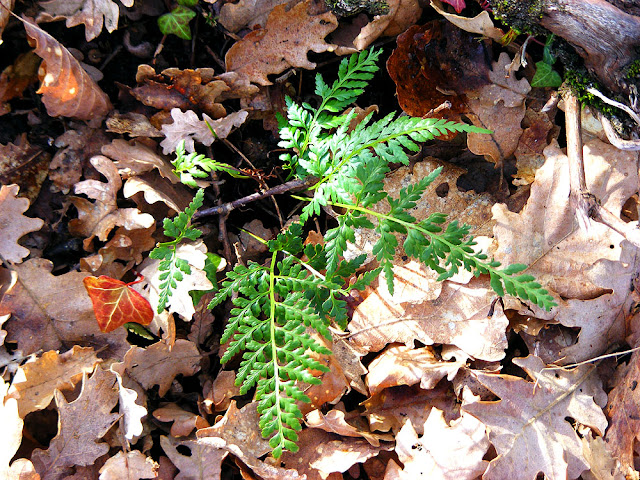 Black Spleenwort is a widespread fern, but not all that abundant in Vienne and Indre et Loire. It's not too fussy about soil. 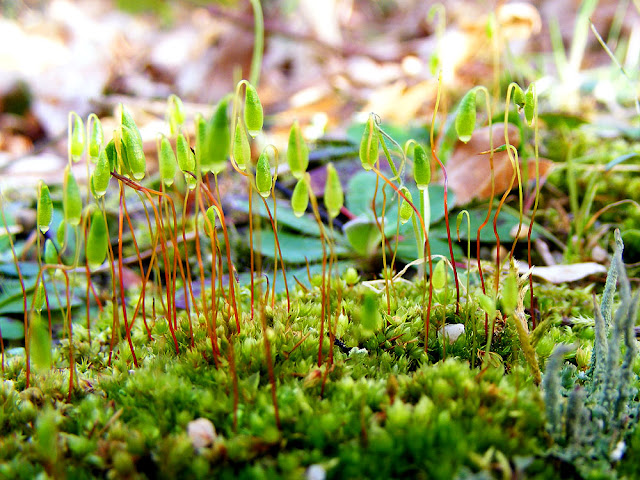 One of the most abundant mosses, with distinctive large drooping capsules on reddish setae (stems) and growing almost everywhere. 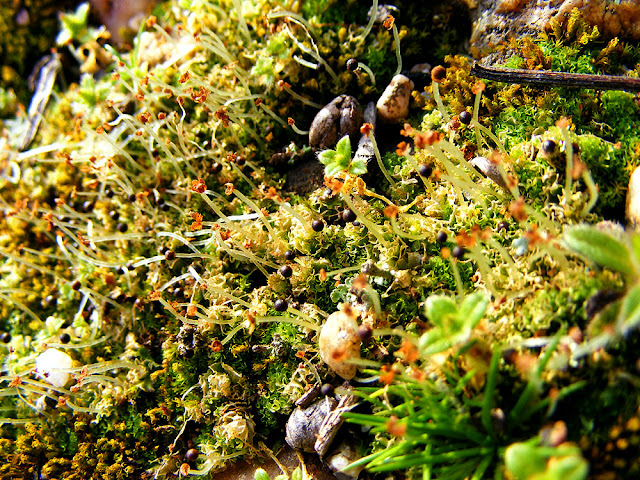 This little liverwort was the star species for the site. It looks just like tiny frilly lettuce. The species can only be distinguished from other similar frillworts by microscopic examination of certain features. Common Frillwort is a medium sized species, which grows on bare acid ground such as tracks and bare patches in cultivation. 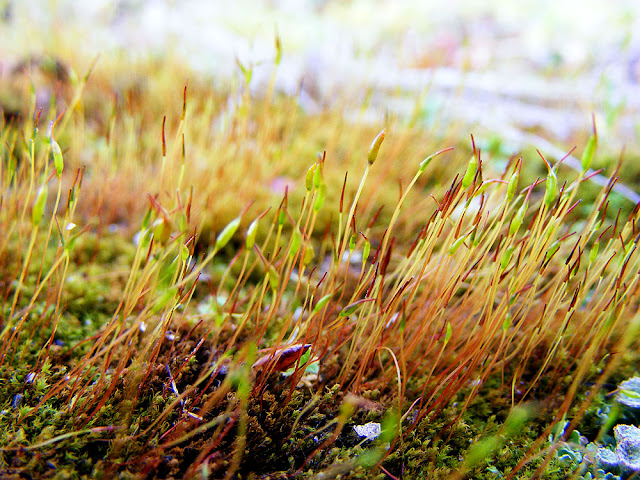 This is a common, variable and widespread species which grows in cushions on sites which have been burnt. In this case, it was growing where piles of vine prunings had been burnt amongst the vines. 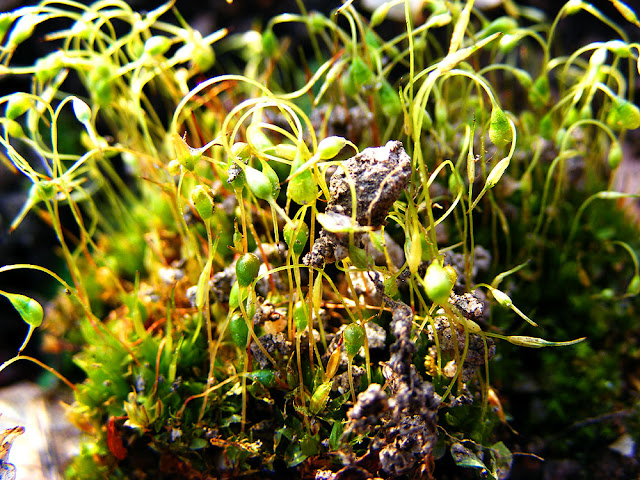 A moss that is even more strongly associated with burnt areas and favours rich disturbed ground. Easy to identify with large fat capsules dangling from swan-necked setae each emerging from a tiny rosette of leaves. A new record for the site. 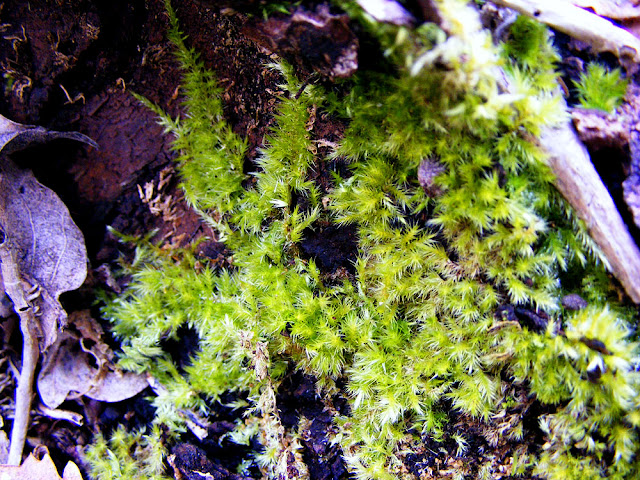 Often found on dead wood, especially base rich species such as Ash and Elder.

Twenty-one species of moss and four species of liverwort have been recorded on this site. On the day we saw thirteen of the mosses and one liverwort.

I am a fan of ferns, and mosses even though I know nothing about them. So this is very educative for me.

Wonderful primer on mosses.... I'm going to be looking with new eyes on my next walk

I love ferns too. So does Franck. I did a great outing with him last year at Mareuil (near K&W).

Glad you were interested. I've been on a couple of moss outings now and just starting to feel like I could get the hang of them.