At the edge of the forest, on the road that leads from La Petite Guerche to Le Rond du Chêne, at the foot of a wooded hill, near the Fontaine de Prélong, stand the ruins of a chapel that you can barely see from the road. The small ruined chapel from the fifteenth century, known originally as Notre-Dame de Preslong is now covered with vegetation. Only a section of wall with an arch remains. About a kilometre away from the very dense woods of the Forêt de Guerche, the chapel and spring are at the end of a small sheltered valley. A stream from the spring runs down the base of the valley towards the River Creuse, and the road runs parallel to the stream. The land has been inhabited since at least the Neolithic period.


The site was home to a Saint Rigommier, a pious hermit who performed miracles. Local legend also says that Agnès Sorel lived in the nearby Chateau de la Guerche, which had been built for her by Charles VII. So far as I know this is not true, but Agnès' cousin Antoinette lived there, as the wife of the local lord, and she became Charles VII's mistress after Agnès died. 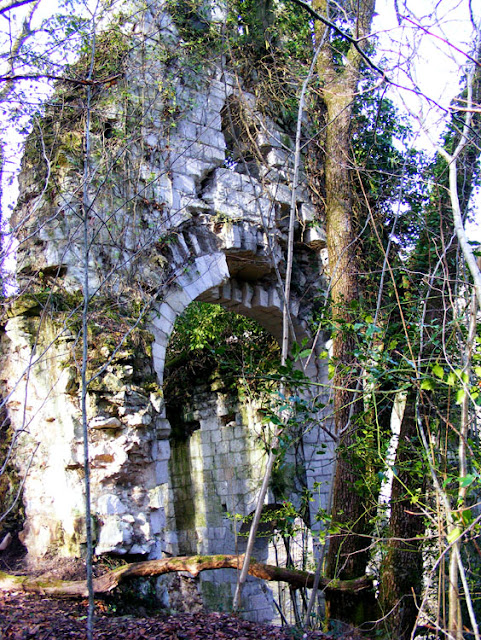 The main legend associated with the chapel is that of a young falconer, out walking with his beautiful young love and looking for Turtle Dove nests. They were attacked by a wolf, who threw itself savagely on the young woman and mauled her to death. Charles VII, on hearing the sad story, built the chapel and had his falconner's fiancée buried in the centre of the building. Shortly afterwards war broke out between the French and English and the young falconner went off to fight. After distinguishing himself on the battlefield he returned to set up as a hermit in the chapel to mourn his beloved.


Local historians believe there is some truth to the story. Today we can still see a hole in the middle of the chapel, which is perhaps the remains of a grave. Supposedly there are inscriptions relating to the lovers still visible on the walls, but I didn't notice anything like that. 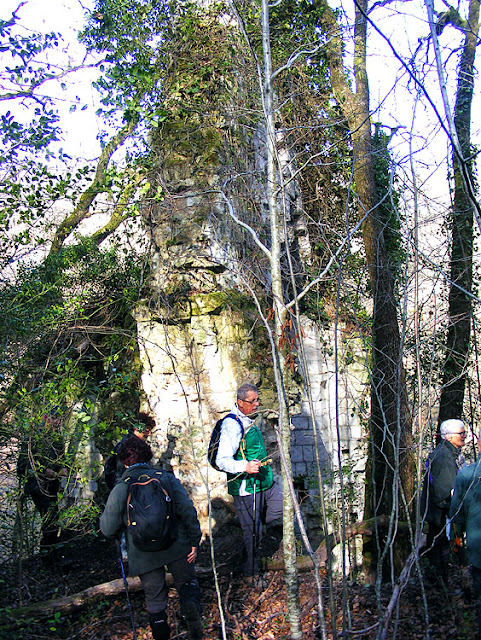 The second wolf story associated with the chapel concerns an old woman, who one day tied her only nanny goat to the door latch of the chapel. A wolf caught the scent of the goat, which was frightened. But the goat was held by a rather long rope and it was able to run inside the chapel. The wolf followed, and the goat quickly exited, pulling the latch when the rope was taut, thus locking the wolf in the church, to be dealt with by the villagers.


As a result the chapel is sometimes referred to as the "wolf chapel" by the locals. The wolf was present and active enough in the area to frighten the population. The last wolf in Vienne (county or département) was shot in 1923. 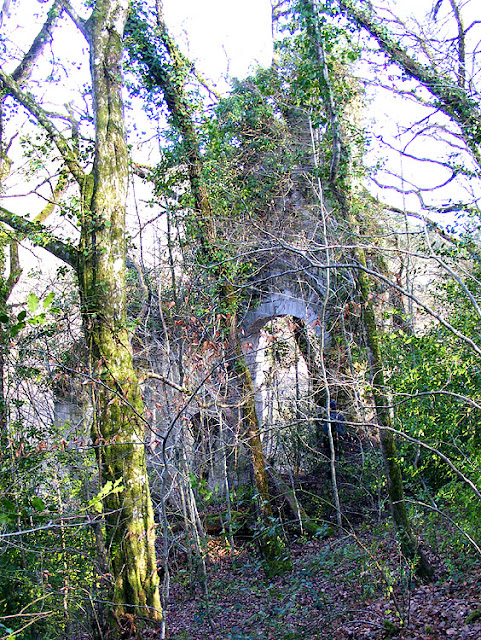 Finally abandoned in the Revolution it took less than a century to turn it into a picturesque ruin. The forest invaded the clearing around the chapel, the roof became damp and rotten, creepers and vegetation covered the walls and the open meadow at the front of the building became narrower and narrower until it disappeared altogether.


The chapel of Notre Dame de Prélong was originally placed under the dependence of the Abbey of Saint-Pierre de Preuilly. During the 17th century, it became the responsibility of la Guerche, being at that time located in the territory of the Comte de la Guerche.