One day a couple of years ago I was driving to Chinon and I happened to take the route which runs parallel to the north bank of the river from l'Ile Bouchard. On reaching the tiny hamlet of Briançon, in the commune of Cravant-les-Coteau, I saw to my astonishment an enormous prehistoric ruin on my left. I didn't have time to stop but vowed to look it up on the internet to find out exactly what it was and to return with Simon.

Last week when he came up to Chinon to pick me up after I had spent a few days there working with Walking Adventures we took the opportunity to stop off at Briançon and check out the monument. 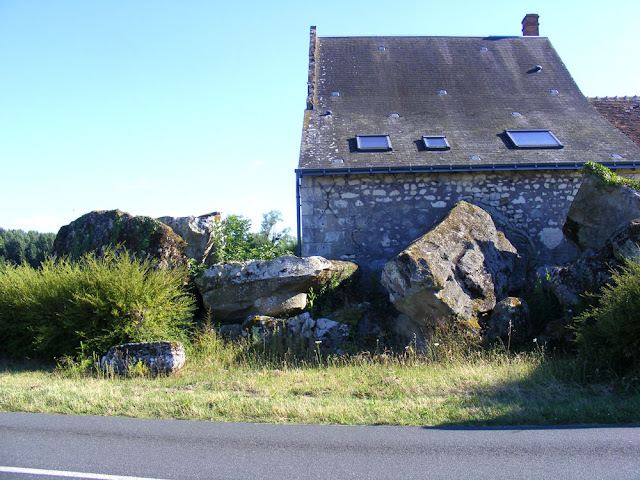 The dolmen, made of Turonien sandstone probably sourced 2-3 kilometres away on the Vienne valley slopes, is at least 15 metres long and 3 metres high. The name 'gros chillou' means 'big rocks' and it would have taken considerable effort to move them from the valley sides to their site near the river. It is the biggest dolmen in the Touraine.

It is right on the roadside, on the D8, on the left if you are heading for Chinon, tucked up against a house. Unable to move the stones, the 19th century owners simply partially incorporated it into their house. Nowadays, tipped up and ruined, it was uncovered in August 1956 by a group of amateur enthusiasts. A local archaeologist said at the end of the 20th century, 'like all those on the right bank of the Vienne, it was constructed in the valley, and not much above the level of the water. It must have been submerged more than once by floods. The opening is oriented towards the east.'

The two front supports remain in place, about 3 metres apart. The slab which they supported was broken into two parts, one of which, almost vertical, rests on the right-hand support, the other, which exceeds 6 meters in its largest dimension, remains raised obliquely on the left-hand support. Beyond that, we can identify 3 other slabs, a support on the right and the bottom, in two parts, joined on each side by buildings 4 meters apart. 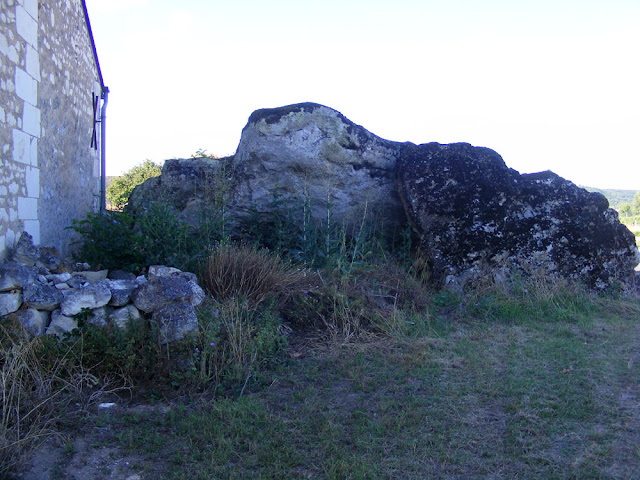 Archaeological investigations were undertaken in the 19th century, but found nothing of interest.

Further reading: The Touraine Insolite page on the monument, in French, but with maps and diagrams.

Have you seen the dolmen on the other side of the river, near Ligré?

No, we've never been there. I've seen pictures of it, and it is impressive enough that we really should visit it.