Drinking in the Rain 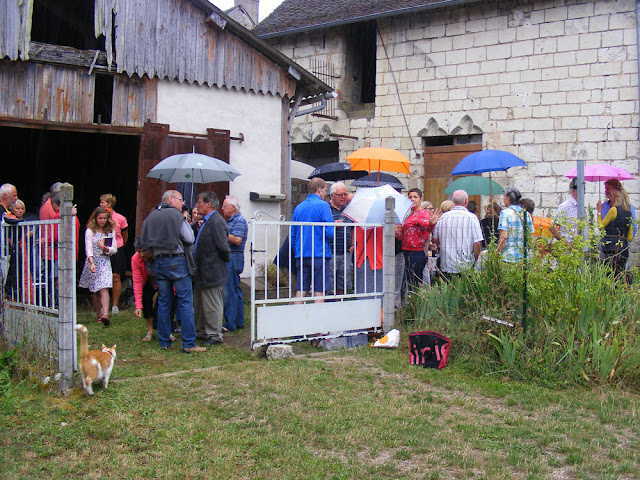 On Sunday we held one of our monthly networking gatherings, which doubled as a birthday party for Simon. People very generously brought not just contributions to the shared table, but little presents for Simon too. We got Belgian chocolate, French, English and Belgian beer, homemade mayonnaise, Dutch caramel wafer biscuits and syrup, wild picked blackberries and a couple of very well chosen books.

We don't have much parking near our house, and a couple of people attending commented on how there were people carrying trays of food converging from all directions on our house when they walked down from the market place or up from the park. I identified one lost soul in the street as 'one of ours' by the fact she was carrying a tray of food. We'd never met before, she had been invited by a friend.
Although the weather forecast wasn't promising, because we expected around 40 people, we decided to take the risk of holding it outdoors because that many people inside is a bit squished. In the end we welcomed around 50 people, and they all stood around nonchalantly in the rain once it started. Some had come prepared with waterproof coats and umbrellas. I handed out more umbrellas, and some people retreated to the garage, but some just ignored the drizzle and mingled determinedly.

These events just about run themselves. I send out invitations and instructions, then people just turn up and talk and drink and eat. They speak a mixture of English, French and Dutch and include English, Scottish, Irish, French, Australians, South Africans, Dutch and Americans. A lot of them read the blog, not all of them live in France full time. Some live in Belgium, the Netherlands, England or South Africa for much of the year. Long may our Eurocentric lives continue.

Email ThisBlogThis!Share to TwitterShare to FacebookShare to Pinterest
Labels: Events, Our house in Preuilly

and a visiting kitty even in the rain! looks like a good time...

The cat is very social. He visits all the neighbours.

The biggest turnout yet.