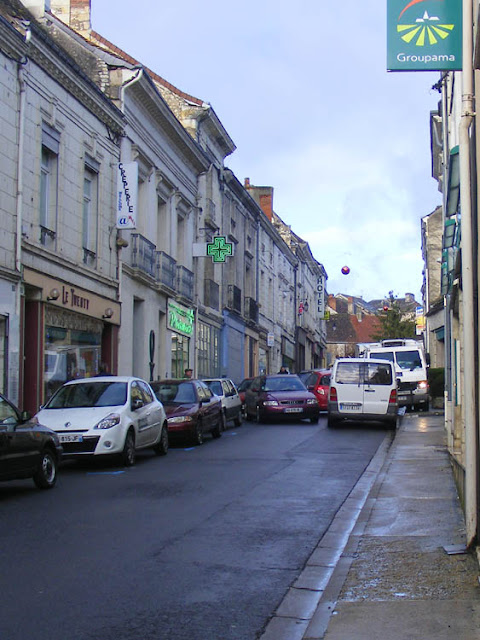 The local council has recently introduced restrictions to parking in the main street of Preuilly in an attempt to reduce the traffic congestion. This street is now Zone bleue parking, which means you are limited to 2 hours and must have a blue parking disk on the dashboard. The way it works is that you set the parking disk to show the time you arrived, so that the parking inspector can check you have not overstayed. It is a system that relies on having a parking inspector in the first place (I'm not sure who's designated in that role in Preuilly) and they have to do the rounds of the Zones bleues regularly, to pick up overstayers and liars.

Zones bleues are in force all over France, and you can identify a parking spot as in such a zone by the fact that it is delineated in blue paint. So far I haven't seen a single person in Preuilly displaying a parking disk on the dash, and it doesn't seem to have substantially reduced the number of cars parked in the main street. Why would it? It's always mostly been a steady stream of people parked for half an hour to an hour while they do their business in town. There is parking in the market place (except when the market is on), in front of the Post Office, next to the abbey and in front of the Hôtel de Ville (town hall) -- all small areas of around a dozen places or less, and usually about three quarters full. All involve a walk of less than 50 m to the main street.

If the council really want to solve the traffic congestion problem, they need to bite the bullet and ban parking in la grande rue altogether except for deliveries and arrêts minutes. Unfortunately, the businesses along the street are convinced their trade would suffer and are against a ban. This is despite having the occasional vehicle reverse into plate glass windows and the vibration of the heavy goods carriers break others as they rumble their stop-start way through town. One good thing though is that because of the crowded main street and the zigzag layout of the route through town, Preuilly hasn't had to create a chicane like many of the surrounding villages now have to slow cars down.
Posted by Susan at 09:00

It is that magic phrase "a walk of less than 50m"... isn't it!
Mind you... the beaches at Burnham Overy Staith and Brancaster were always wonderfully clear for the same reason!!

People would rather risk damage to their cars than walk a few more steps I think. It's the same in Le Grand-Pressigny but the congestion problem is solved there by having the one-way system through the village.

We have had quite a few near misses in Preuilly (and in other villages around) but those chicanes are also tricky as you never know whether the oncoming vehicle is going to give way when it should.

I'm not surprised the zone bleu system has failed to make a difference as I imagine a lot of the parked cars are just there for long enought to pick up some bread or get a haircut. I wonder if the council did a survey to find out what people's parking habits/needs were before they introduced it.

I agree with you about parking on the main street. Given the time and effort it takes me to parallel park (badly, at that) I'm better parking up and walking.

We have a disk for Loches given to us by an Estate Agent when we were looking at property with him. Don't know if it is still current. You are supposed to set the time you parked on it??

Jean: yes, having someone sweep up beside you from behind just as you think you are going pull out to go down the street is always a bit alarming.

C&E: yep. You can use your blue disk anywhere, btw. We got ours in Loches too, but could use it in Preuilly if need be.

I've just remembered someone told me about witnessing the open door of a parked car being ripped off by a passing vehicle in la grande rue. The person I spoke to had had to make a statement to the police about it.

Beaver: I don't think so. They are easy to get -- we picked up ours in the post office. And there is always alternative parking, so you could get away without one.

Where I lived people would park on the roundabout to pick up their bread despite having free parking just alongside...
And I loathe chicanes.

Beaver: Simon tells me he got the blue disc from the mairie, not the PO.

Fly: I loathe people who drive too fast through villages a lot more than I dislike chicanes. We are especially interested by the chicanes that have the nice safe flappy high vis reflector signs...backed by a stonking great planter full of earth.

The blue disk parking system is everywhere in the Netherlands [and pretty much rigorously enforced too!]. You got your disk free along with your EU accident forms but often places would have free ones to hand out. We usually had extras hanging around the house.