The Basque country was the front line at one point in the Napoleonic Wars. First the senior French generals and then Wellington were based in Saint-Jean-de-Luz and in response the French and their allies ressurected a series of small forts called redoutes across the mountain tops. 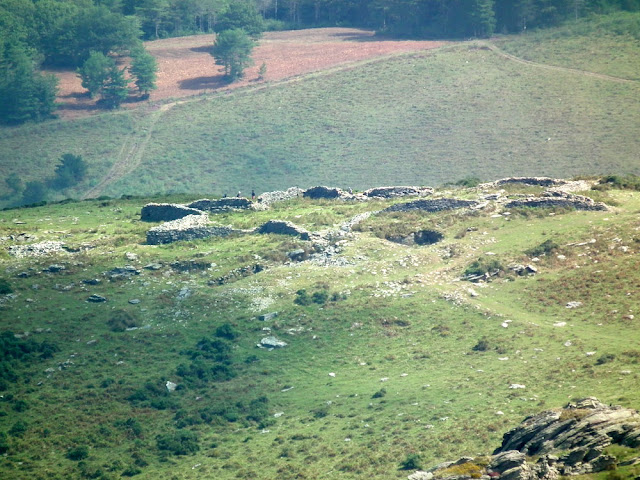 These forts were constructed in 1793-94, when mid-Revolution, the French found themselves fending off Spanish Royalists. Later, early in the 19th century, they were hastily refurbished to keep Wellington and his allies at bay. Some of them were little more than ditches and trenches. The one you can see from the summit of La Rhune was built on the site of an old hermitage and is a fairly rough assemblage of dry stone walls formed into a star shape.


In October 1813 Wellington launched 20 000 troops at La Rhune. By day two of the attack the Hermitage fort was over-run by Wellington's forces, who then used the steep slopes of La Rhune, and the French artillery positioned there to bombard one of the other lower redoutes. Within a fortnight the conflict was over and a sort of peace descended for about a month. Finally Wellington threw 40 000 troops at La Rhune and ultimately managed to split the French army in half at Bayonne to bring the campaign to an end.


(I should note that after having read a very detailed account of this campaign in French I lost the will to live. There may well be inaccuracies and misunderstandings in the above potted account. I can't believe the number of generals required to defend a line of poxy little forts.)