An Accident in the Forest

The headline local news since Saturday has been about a shocking car accident in the Forest of Loches, where a car hit a stag in broad daylight. The young woman who was a passenger in the car remains in hospital in a medically induced coma. There is ongoing controversy over whether the driver of the car was to blame because of excess speed or whether the local hunt was to blame because the hounds chased the deer on to the road. It had been raining and the road was slippery.


According to the family of the victims there was no roadside signage to indicate a hunt was in progress. The crash was very dramatic, with a couple of eye witnesses, and has shocked everyone who spends time in the forest -- drivers, hunters and nature lovers alike. The vehicle ended up on its roof, in the ditch. The stag was thrown 50 metres. Forestry officers were called to retrieve the body of the animal. The medivac helicopter couldn't land near the scene due to the proximity of the trees, so the injured were taken by road ambulance to the hospital in Loches. The helicopter was waiting there to take the young woman, who had suffered a cardiac arrest, to intensive care in Tours.

A typical road through the Forest of Loches (not the stretch of road where the accident occurred). 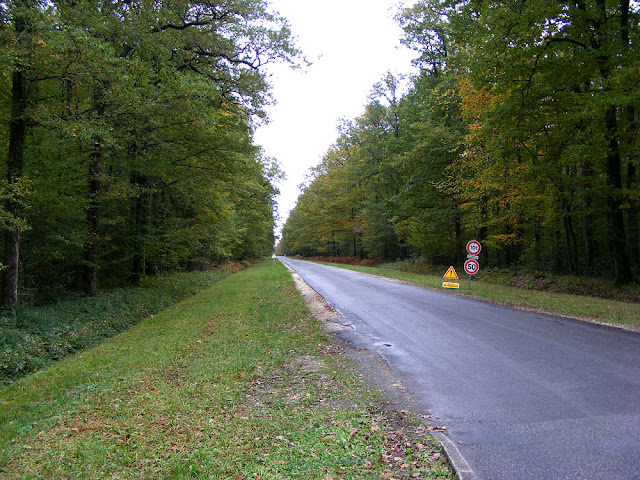 A car carrying a man driving, his wife as passenger and their two year old child in the back hit a stag on the D764 between Loches and Genillé. According to the police there was a white van on the road with its hazard lights on to warn that a hunt was taking place in the forest. According to an eye witness the stag was not being pursued, but crossed the road calmly when the vehicle, travelling at considerable speed, collided violently with the beast. This witness had been standing at the edge of the forest and spotted the stag. They stepped forward to take a photo and the car appeared out of nowhere and slammed into it.


The brother of the driver has a different version of events though. According to him, his brother was driving at 80-90 kilometres per hour. He saw the vehicle stopped on the road in the distance, but no warning lights. He wondered what it was doing there. He passed it but did not see the stag coming, and says it was being chased. He saw the hunters and hounds arrive five minutes after the collision. He did not see signs placed along the roadside warning of the hunt.

A Red Deer stag Cervus elaphus (Fr. cerf) (not in the Forest of Loches). 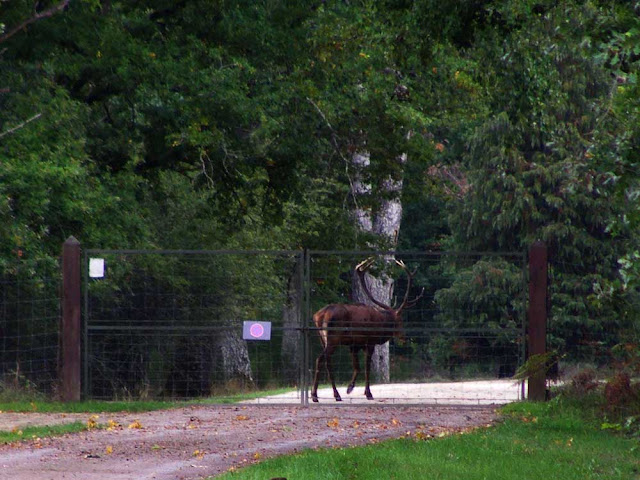 
The driver's family talks about a delay of five minutes after the impact. An eye witness says it was a quarter of an hour.  If the game animal was not being chased and crossed freely it means the animal is not the property of anyone in particular, but is common property.


The hunt president also mentioned that the law is vague about the circumstances when a hunt must be indicated with signage. Under current regulations there is no obligation to put out signs, other than that hunters must wear high viz (usually choosing orange). He also observed that hunters are not the only people in the forest disturbing the wild animals. Mushroom hunters are also in the areas where the big game lives.


Local opinion is split on the subject. Some people are demanding the cessation of hunting. Others criticise the speed of driving and point out that hunting is useful for regulating the deer population. Drivers who use the road frequently say that the hunt would not have been indicated to road users. Others say that the presence of large game is a natural risk and requires everyone to be extra vigilant.

Email ThisBlogThis!Share to TwitterShare to FacebookShare to Pinterest
Labels: Loches and area, nature and wildlife, The Car and Driving

"Others say that the presence of large game is a natural risk and requires everyone to be extra vigilant." I am one of them. There will be road signs to indicate this danger. If the stag was large and knocked 50 mtrs then that says it all.

Yep. That's my opinion too. It's a dreadful outcome for the young wife though.

Some observations around your last paragraph, Susan.
"Others criticise the speed of driving and point out that hunting is useful for regulating the deer population."

Certainly speed is a factor...
I always slow down to 60kph, or even 50kph where open, un-hedged or fenced woodland is concerned...
sometimes less than 50kph in conditions like this afternoon or at night.
I have seen first-hand the result of hitting a large animal...
when I was in forestry, a contractor hit a red deer hind, that had been put up by a pair of Salukis, and wrote his long-wheelbased Land Rover off.
He was probably doing less than 40kph...
the tracks were ex-wartime concrete and in a terrible state.
The left-hand front side of the vehicle was completely destroyed, and the chassis twisted....
the deer, with two deer hounds on its tail was probably exceeding 65kph and came out of the trees almost head-on...
it would have been like hitting a pile of wood at 100kph.
He wasn't badly hurt, fortunately, and although his head hit the windscreen, he was wearing his hard hat with the visor up!!
Just bruised ribs....

The second part that "hunting is useful" to control the population...
no, it is important, we've removed the top predators...
but that control can be done by stalking and selective culling... the Forestry Commission way used at Grizedale in the Lakes...
you do not need to go wahooly after the beasts...
same with the control of wild boar.

If you go up to Helmsdale and turn off the A9 northward, towards the RSPB reserve at Forsinard, you see the effects of non-control of deer population....
firstly, there are deer everywhere... and near the road, too, not on the hills... and they are poor quality, sick looking animals as well....
you wouldn't see a stag like the one in the last picture...
six points, eight maximum is the rule... and sprog-horns aplenty.
The reason? The population is not hunted properly and the area is overgrazed... therefore the deer are starved and no one will pay hunting money to shoot poor quality beasts.
As a result, The Flow Country between Forsinard and Helmsdale is suffering the effects.
At Forsinard, they are lucky, the railway line to Wick and Thurso is fenced along there to stop deer and trains colliding, and the reserve is on the Northern side.
On the reserve's northern side is a large section of "investment forestry", fenced all round which shelters the reserve from the effects of the second overpopulation of red deer to the North.

And your final line's sentiment I agree with totally....

Something I cannot understand is why they insist on line the butts up along the side of the road... it means that they have to drive the beasts towards the gun and the road... with less than 20mtrs between butt and road!!

Good observations. I agree that in the absence of top predators hunting is necessary. It's not just about culling, but moving the animals on so they don't spend too much time in any one place. This also slows their breeding rate down. I also agree that speed (and hubris) must have been a factor in this accident.

Others say that the presence of large game is a natural risk and requires everyone to be extra vigilant. Exactement. We live the deer's territory and must share it with them as best we can. The deer can't "think," so we must.

Plus we are busy stealing the deers' territory hand over fist.