Pottokak (singular 'pottock, pronounced 'pottiok') are a breed of pony from the western Pyrenees. Their origins are ancient, probably Paleolithic and they greatly resemble the images of horses sketched on cave walls from that period in the area. The modern Pottokak are the descendants of those small horses which were primarily hunted for food in prehistoric times, who roamed the Atlantic Pyrenees up to a million years ago. Traditionally in more recent centuries they have been used for all sorts of agricultural work in the Basque country, and also as pit ponies.


A pottock on the slopes of La Rhune. 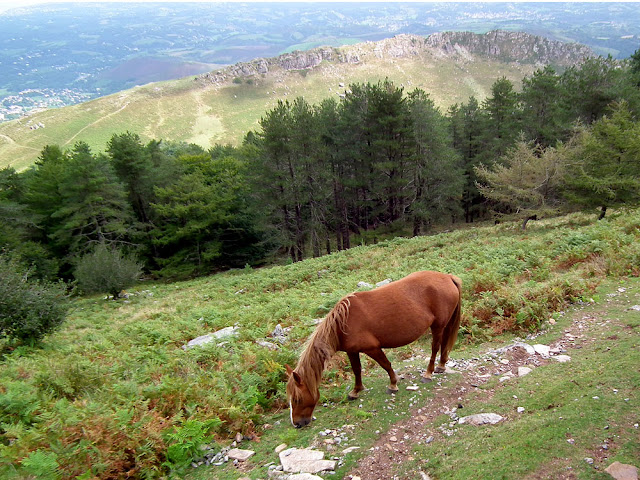 They are small, and strong for their size, with tremendous stamina, as well as being generally dark in colour so they don't look dirty or require too much care -- ideal for working down the coal mines in the 19th century. This led to the breed being divided into several strains. The bays and blacks went down the mines, the piebalds went to circuses and as childrens mounts in weathy households or riding schools. Pottokak originally were all black, bay or chestnut, never grey. Piebald individuals are now very common, and the colour is accepted by the breed standard, but it is a result of hybridisation many generations ago with other breeds. Nowadays there are two accepted strains -- lowland and upland ponies, with slightly different breed standards. The lowland ponies tend to be larger and are raised domestically, on farms. The upland ponies are born and grow up in their herds in the mountains. 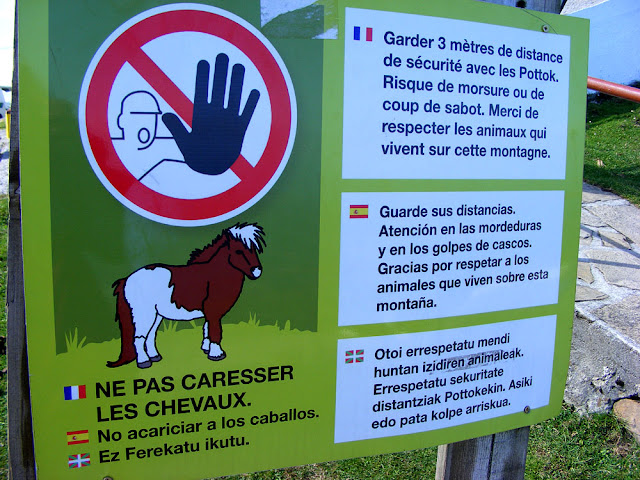 Today the upland ponies live semi-wild all year round on La Rhune and several other mountains, in the heartland of their ancestral territory. Once or twice a year they are rounded up, counted and treated for worms. Selected ponies are sold at annual fairs at Espelette and a couple of other places.


Pottock mares and a foal, photographed from the train on La Rhune. Because of its ancient lineage the breed is considered ideal for nature conservation restoration projects in the Pyrenees. The breed is particularly well adapted to life in the mountains as it has developed a remarkably thick shaggy winter coat that is more or less impermeable. Their diet consists of rushes, brambles, acorns and chestnuts.


Ninety percent of the breed population lives in the Pyrenees and there are 108 stallions registered. The breed is officially designated as rare and endangered.

Hope you didn't get to close!! Good to see the Basque language and flag on the sign.

No we didn't get too close, and they ignored us, which is good. It means that well meaning tourists are not in the habit of feeding them. We heard Basque spoken in the nearest village, and the Basque language is everywhere on signage.

Lovelt little creatures, aren;t they. So glad you saw some.

Very interesting history! I had no idea before I looked them up to write the blog post.