The Romanesque Kitchens of the Royal Abbey of Fontevraud

The Romanesque kitchens of Fontevraud Abbey are in a very special building, located at the back of the refectory, at the southern corner of the cloister. The building is very recognizable thanks to its conical hoods covered with 'turtle shell' slates. There is no doubt that the building, which was built in the first half of the 12th century, was associated with the kitchen. However, it lost its use for a while, so much so that by the 19th century, its original role had been forgotten. As a consequence the kitchens once served as a necropolis where the bodies of the Plantagenets were stored. Then, as a 1762 plan shows, the building was just thought to be a tower. Finally, the building was abandoned until the abbey was classified as a Historic Monument.


Now there is a 1.8 million euro project to restore these important kitchens being undertaken. The building was completely enclosed in scaffolding when we were last there, in the autumn of 2019, and the project is due to finish at the end of next year.


The Romanesque kitchens of the Royal Abbey of Fontevraud,
before the current conservation restoration project started. 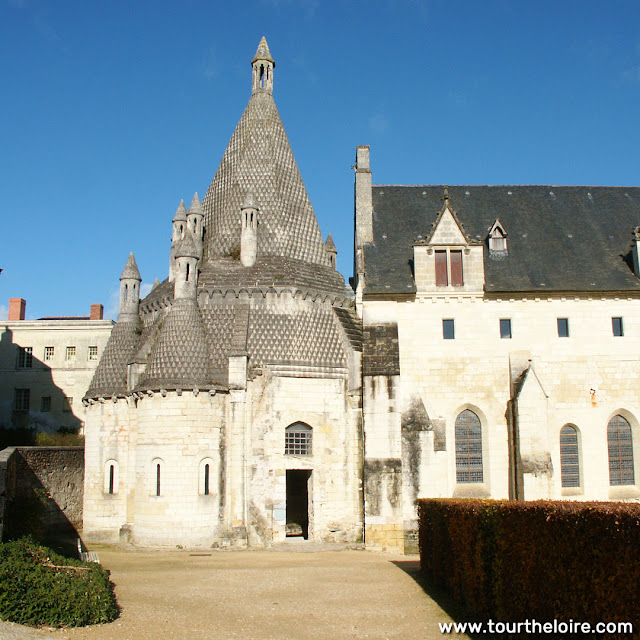 The abbey church and the monastery buildings were built simultaneously at the beginning of the 12th century to accommodate up to three hundred nuns. The Romanesque kitchens, located in the southern corner of the cloister, are now one of the best preserved buildings of this first construction campaign. This octagonal building is surrounded by five apsidioles (secondary apses), each lit by three narrow bays and vaulted in a semi-dome. The central part of the kitchens is topped by an octagonal hood resting on four high arches supported by columns. Outside, the five absidioles are separated by column buttresses and crowned with conical hoods with lanterns.


The first restoration work by the Historic Monuments on the Romanesque kitchens was carried out under the direction of the architect Lucien Magne from 1903 to 1907. Based on models of existing old kitchens in England, the architect proposed several restoration alternatives. The small building was very dilapidated, and the decision was made to undertake a very radical restoration. By applying a doctrine inherited from the architect Eugène Viollet-le-duc, Lucien Magne redesigned the lanterns based on similar representations of kitchens and gave them the appearance that we see today. This highly interventionist restoration policy had its detractors and generated many controversies. Lucien Magne has been accused of having distorted the building, which was originally supposed to be covered with a stone dome.


The kitchens have not been the subject of any major intervention since Lucien Magne's restoration at the beginning of the 20th century. In recent years, the condition of the building has become a concern. The top lantern, destabilized and threatening to collapse, had to be dismantled in July 2014. Vegetation had appeared on the roof, stones were eroded, and visible infiltrations in the lower parts of the walls, were all exacerbated by the particular construction of the toothed roofs.


These degradations are the result of a long exposure to bad weather, associated with the juxtaposition of stones of different sorts. Indeed, during its last major restoration, the damaged local tuffeau had been replaced by a harder stone, a process that accelerated the degradation of the tuffeau stones that remained in place.


The conservation and restoration work should make it possible to stabilize and consolidate the most degraded parts, to restore both the exterior and interior of the building, while safeguarding the authentic old elements still in place. This work also provides an opportunity to provide access to the building for people with reduced mobility.


An archaeological study is being carried out simultaneously with the restoration work. Carried out by the archaeology department of Maine-et-Loire, it should make it possible to understand the building during its construction in the Middle Ages and its successive uses, by differentiating between the elements that date from the primary construction of the building and those that were recreated by Lucien Magne. According to Eugène Viollet-le-Duc, each absidiole was a chimney with a fireplace, whilst the modern day historian Michel Melot considered that the kitchens were essentially intended as a central fireplace smoking room, and that the meat was hung in the absidioles. The functioning of this building therefore remains an enigma, which archaeologists will try to solve.