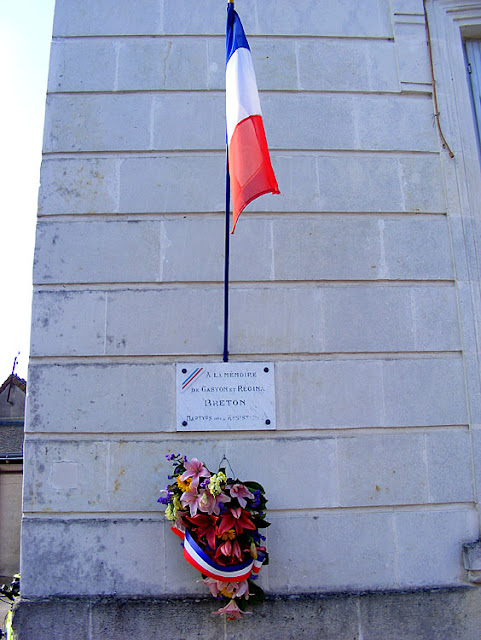 Today is Victory in Europe Day and there will be commemorations all over to celebrate the end of the Second World War in Europe. The memorial above is in Charnizay and names two local Communists who joined the Resistance and were killed. The ceremony in Charnizay will begin here at the town hall, with the laying of wreaths, then villagers will march to the cemetery, a few hundred metres away, where more wreaths will be laid at the feet of the War Memorial. Then there will be drinks and cake in the village hall.


The Communists were the first target for deportation and execution in France by Hitler's Nazis. Many escaped and joined the Resistance. Because they were already used to operating clandestinely, they formed an organised Resistance immediately that France fell. But by the end of the War, their vision of how France should go forward did not suit de Gaulle and they were sidelined.

Gaston Breton, 53 years old, was born in Charnizay but lived in Tours, where he ran a café. He was also an active and militant Communist and a Resistance organiser, who had acquired a supply of explosives for his group and held secret meetings at his house. After documents implicating him were discovered in Paris he was arrested in Tours by the French police for distributing pamphlets. On 21 February 1942 he was transferred to Paris and on 21 March he was handed over to the German authorities and held at Fresnes prison, then Cherche-Midi. On 24 August the Gestapo gathered together a group of sixty Resistance prisoners and used them as hostages at the Fort de Romainville.

Following a Resistance attack on the Cinéma Rex in Paris 110 hostages were executed in reprisal. Forty-six of them came from Fort de Romainville and Gaston Breton was one of them. Another hostage who witnessed these events stated "On September 20, 1942, after the roll call, all our comrades were gathered and put in a bunker to spend their last night. We saw them leave at 7:00 a. m. on September 21, and they were all brave and proud. No gesture of impatience could be seen on their emaciated faces. All these comrades bravely awaited death, and looked with contempt at their executioners. At 11 o'clock, they fell in front of the enemy."

Regina Breton, Gaston's wife, was arrested at the same time as he was and interned in La Santé (the big prison in the centre of Paris near Montparnasse). She was deported to Ravensbruck on 12 March 1945 and died in this notorious camp.

Their three young children remained in the family home.

I'm at a loss for words to explain how I feel at the remembrance of those dreadful times.

I know what you mean. I think that in this case the facts speak for themselves.

I have just read and would recommend Les Parisiennes by Anna Sebba which tells the stories of those who resisted (many ended up and died in Ravensbruck). The book is particularly about the Parisian women who resisted but inevitably tells a national story. Always on the lookout for a good book on the war experience or resistance in our own area if anybody has any suggestions.

I've heard of the Anna Sebba book, but not seen or read it. Remind me to introduce you to John, who has a good collection of WWII histories and is particularly interested in the French Resistance.

Thanks Susan - I'd like to talk to John about this..

Are you coming to the apéro on Saturday? I assume John will be there.