Beetles in the Loire Valley

The second most clicked on blog post in Days on the Claise is called Big Black Beautiful Beetles so I thought I'd revamp the idea and include a few, sometimes small, but lovely beetles that you might encounter in the Loire Valley. 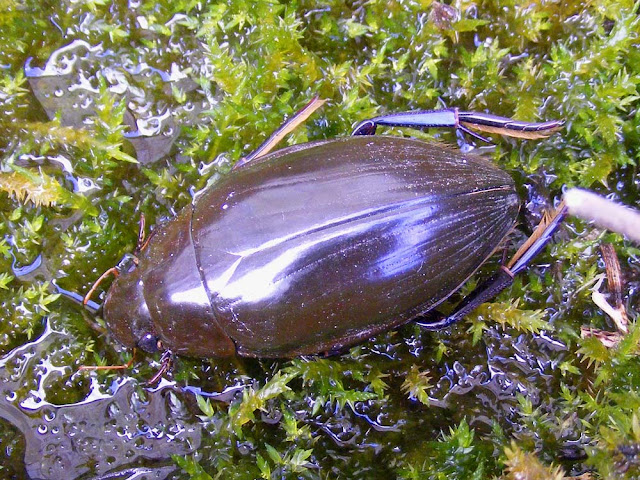 Great Silver Beetles are aquatic and out of the water a dark olive green. In the water however, they are enclosed in a bubble of air which makes them look like quicksilver. The beetles are covered in fine hairs which trap the layer of air. Their shape is streamlined and their legs feathered, in order to move through the water. Despite their rather predatory appearance they are mostly omnivorous scavengers (although they will tackle water snails). 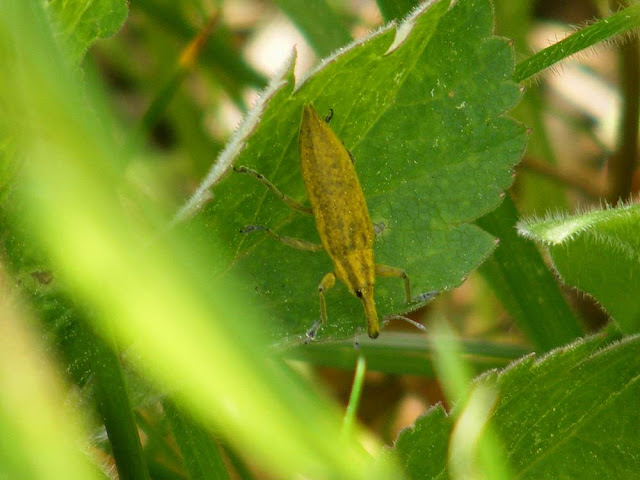 A strange elongated creature shaped like a torpedo and completely covered in gold fuzz, often found on umbellifers such as Wild Parsnip, especially in damp places, in the spring and autumn. There are several similar species, but the elytra tips are longer and more spreading on the one it most closely resembles. L. iridis is quite a large weevil, with a weevil's distinctive long snout. It is covered in greeny yellow pubescence, which gets worn off as the beetle ages, so older specimens are black. 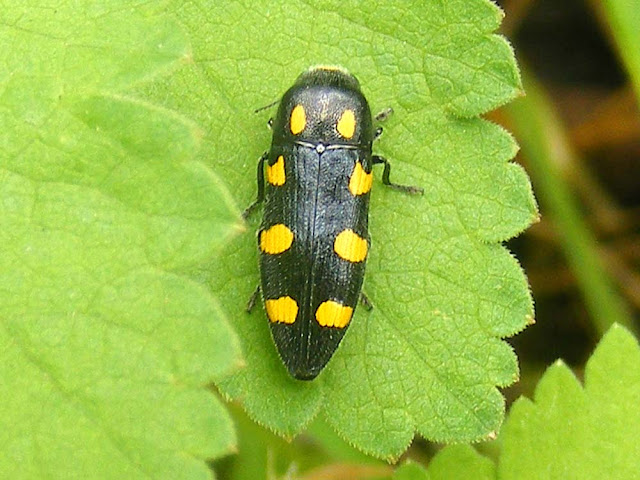 Like all Bupestrid (Jewel) beetles this species is a wood borer.  This one is a known pest of cherries. It is a widespread species whose larvae develop in the wood of both dead and living stone fruit trees, taking two to three years to emerge as adult beetles. They are black with the number and shape of yellow or red spots varying between individuals. Bullet shaped, as is typical for Bupestrids, with a head that is much wider than long. 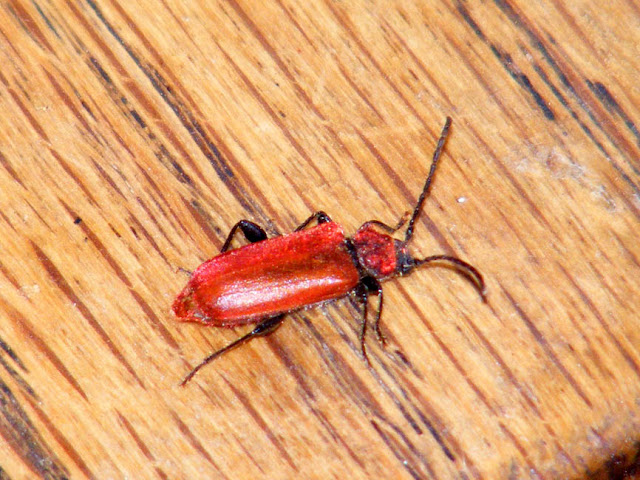 Anyone who uses firewood in the Loire Valley will recognise these. They often emerge from firewood logs in the warmth of the house when you bring the wood in. They belong to the Cerambycidae family, or Longhorns, a group with a reputation for causing structural damage in oak framed buildings such as are ubiquitous in the Loire Valley. However, this reputation is based on a misconception. Longicorns don't like milled timber, only rough oak with its bark still on. 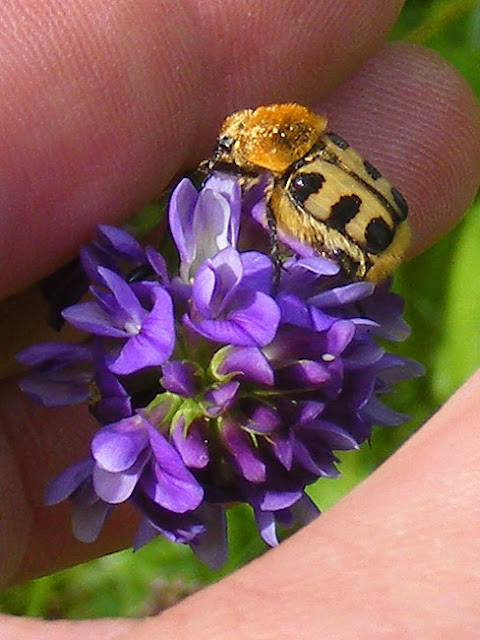 This little creature can be encountered from May to July sitting on flowers. This one is on lucerne. At first glance you think it is a bee because it is black and tawny and very hairy, but it is in fact a beetle in the chafer family, known (unsurprisingly) as a Bee Beetle. There are several very similar species and they are very variable, ranging from pale yellow to deep orange, and the black spots are different on every one. This species, T. gallica, is the one you are most likely to encounter. 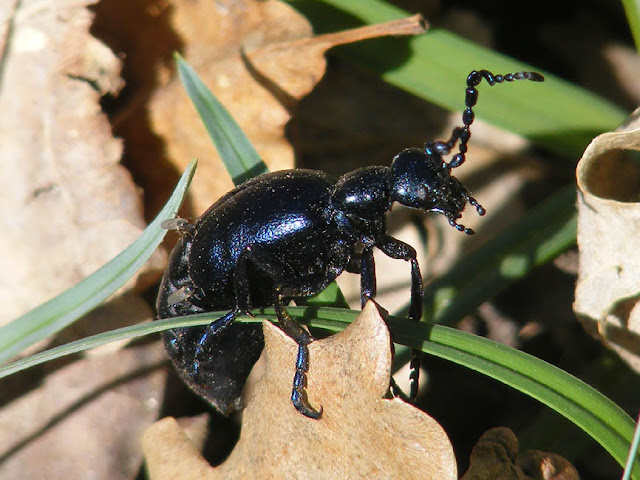 Oil beetles are part of a family that contain a poison called cantharidin. This toxin is the active ingredient in aphrodisiac mixtures that predate viagra. They work, but it is all too easy to take a lethal dose. The beetle eats toxic plants to accumulate the poison in its body - in this case members of the buttercup family, especially Wood Anemone. When they are stressed they ooze orange liquid from their joints, in an attempt to warn predators off by producing the poison. 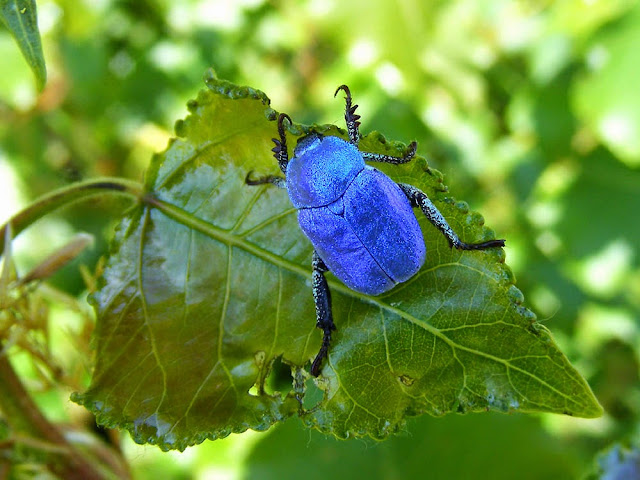 This extraordinary shiny blue beetle is a type of scarab. It is abundant in the summer along water courses and in damp places in the Loire Valley where there are Poplar trees. The bright blue colour is literally a trick of the light. The species doesn't produce a blue pigment, but due to microscopic scales refracting and reflecting light, what the human eye sees is sparkling blues. The beetles scales have been studied for their photonic qualities and their technological possibilities for smart coatings. Such a good wasp mimic it's easy to be fooled, but it is actually a type of longhorn beetle, readily identifiable by the bow shaped yellow markings. The beetles can be anything from 8 to 20 mm in length. It is lustrous black with bright yellow spots and stripes. The legs and antennae are orangey brown. They like to hang out in the sunshine on dead oak and beech. Their colouring makes them look like wasps, but to add to the effect in life they move like Vespula spp wasps. 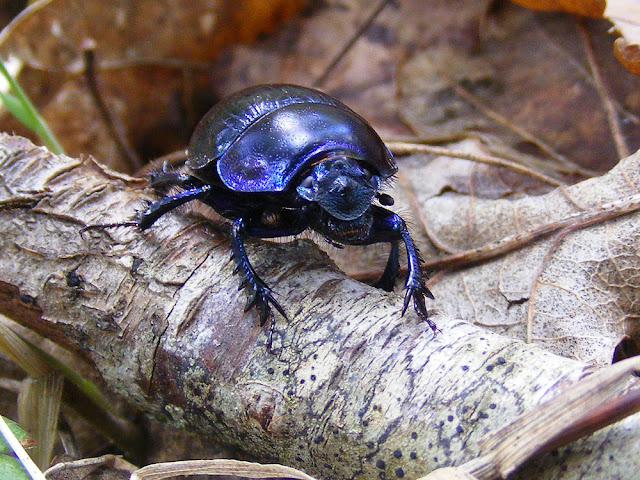 Around here, this is by far the most common species of Dor Beetle. If it is in the woods and there is no cow dung in sight, it will not be Geotrupes stercorarius, a another common lookalike species. A. stercorosus  is a woodland species and relatively small but otherwise looks much like other Dor Beetles. They are irridescent blue black and like all other Dors, are dung processors. These ones are not overly choosy, burying the dung of many different mammals as well as leaf mould and fungi. 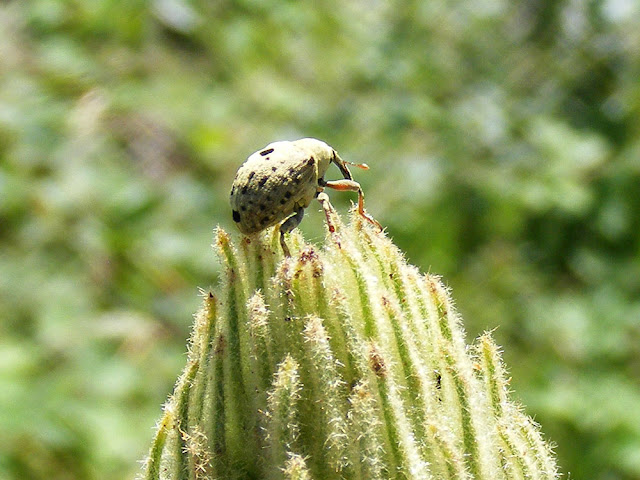 This charming little weevil is widespread and abundant. There are about 40 species of Cionus in France, most of which look very, very similar. Luckily, this one is quite easy to identify, based on its preference for Great Mullein and the even colouration of the grey scales covering its body. The closest lookalike species favour Figwort and have scales that are different colours on different areas of the body.

Charmantes petites bêtes! The blue one is amazing.

The Hoplia's are rather amazing, aren't they?!

I love those little Bee Beetles they look almost cuddly I saw them for the first time last year. Many of the others I do not know. Have a good weekend, Diane

I'm always very happy when I see one.

I remember the big stag beetles we had at our house in the Vendee. They barely seemed capable of flying and our dogs used to try to pluck them out of the air (I stopped them lol)

They are genuinely unable to lift off from the ground. That's why you see them climbing walls etc. And their style of flying is fairly out of control.

They always remind me of those wing suit things, with arms and legs outstretched, flying in an almost vertical position.