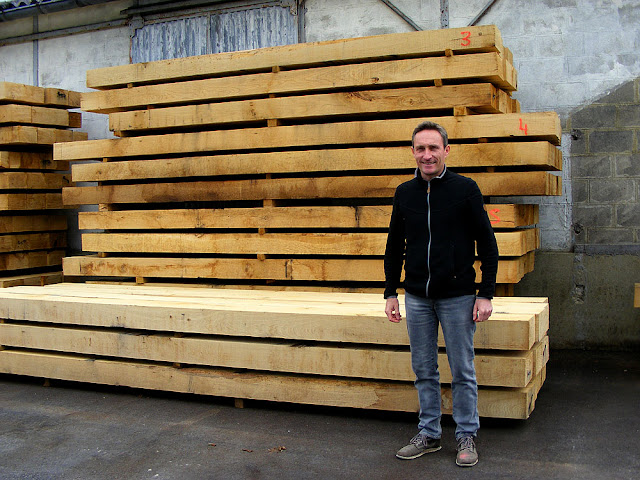 Rémi Brégea, owner and manager of Moreau et fils, the sawmill in Genillé,
in front of orders waiting to be shipped out.

One afternoon, on my way home from taking some clients around Chenonceau, I called in to Moreau et fils, the sawmill at Genillé. I'd passed the place often and admired their big logs and slabs of wood curing in the yard, but never called in before. I was prompted to do so this time because of an article in the local newspaper in the wake of Notre-Dame de Paris burning down.

Sawn oak, treated and aging in the sawmill yard. I thought Jérémy told me these were treated with paraffin, but I'm not sure I understood him correctly.

In 2013 the sawmill supplied beams that currently support the big bell in the south tower, so when he saw the television news showing Notre-Dame de Paris in flames, Rémi Brégea, the owner and manager of the sawmill, experienced a more personal reaction than many. He and several other sawmills had been approached at the time by a carpentery firm specialising in historic monuments that he has worked closely with for over a decade. 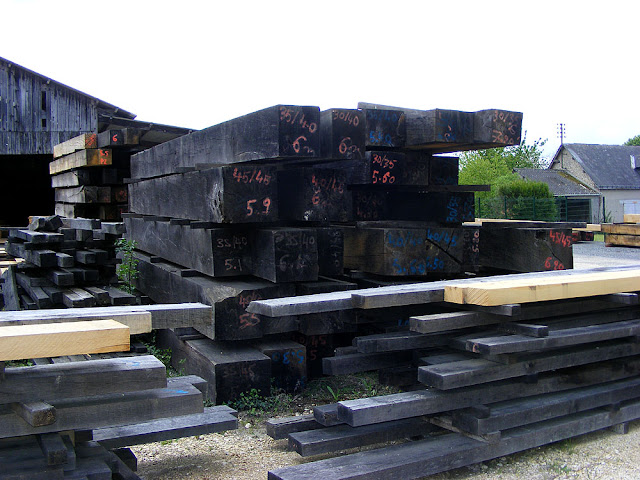 The largest oak beams in the yard on the day I visited. The figures painted on the end are the dimensions and mean that prospective buyers don't have get their tape measure out.


The oak comes from a territory within a one hundred kilometre radius of Genillé, from the Forest of Blois in the north and the Sologne in the east, to Chinon in the west and Chateauroux in the south, but surprisingly little from the nearby Forest of Loches. The latter forest has a lot of high quality wood, but it is destined for the coopers and will become barrels. Coopers pay a lot more than roofers and carpenters.

V-shaped and curved logs put aside for boat builders.

Moreau et fils supplied several beams of around ten metres long for the south tower of Notre-Dame. The biggest bell weighs 13 tonnes and its clapper alone weighs half a tonne. Rémi Brégea got the chance to make a site visit with the carpenters and got up on the roof of the cathedral, an experience that he recalls with a thrill. He knows how few people ever have the chance to do what he did. He says he has wood all over Paris though -- in the Hôtel Matignon (the Prime Minister's residence), the Elysée Palace (the President's residence), and in the Palace of Versailles. His wood was also used in the reconstruction after the fire at Windsor Castle in 1992, and the recreation of the frigate Hermione at La Rochelle (Lafayette's ship that he took to America). The sawmill sent off five hundred cubic metres of sawn oak beams and curved boards for the Hermione.

S-shaped metal staples are hammered in to the ends of beams to stop them splitting.

The sawmill, which was set up in 1902, employs 13 people and last year produced 3000 cubic metres of wood for carpentry, from 7500 cubic metres of logs. A quarter of their output is for historic buildings. Rémi Brégea points out that 1300 cubic metres is the quantity needed for Notre-Dame. But there is no way he will be able to supply the quantity and quality on his own -- even if the rebuild is in wood. 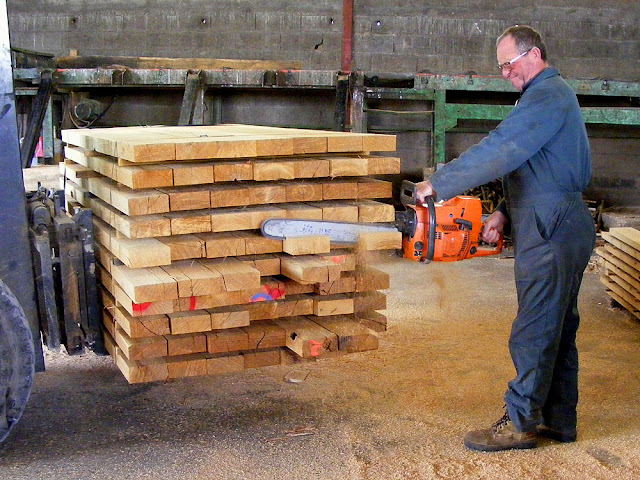 Trimming a pallet load of joists. The man wielding the chainsaw is the one who told me off when I first arrived, but he was perfectly happy to have me photograph him once the boss was back.


I called in at the sawmill at the end of lunchtime, so there was hardly anyone about. Rémi Brégea's mother emerged from the house across the road and I had a nice chat with her. She is very proud of her son and told me that not only had he been in the Nouvelle République recently, he had been on France Bleu (television) too. She told me all about the sawmill supplying wood for Windsor and said that I was welcome to take photos -- 'If anyone questions you, say that Rémi's mum said you could'. Unfortunately this got me in to trouble, as I was very firmly requested to go back to the office and await the boss's return from lunch by his workers.

Once he got back though the boss was incredibly accommodating, saying he didn't have time to show me around himself, but he could offer me the intern, Jérémy. Young Jérémy turned out to be a pleasant young man in his final week of a five week stage at the sawmill. He was able to pass on the basics of how the factory worked, but couldn't give me the nitty gritty of facts and figures. He also admitted that he would not be going into the sawmill or carpentry business, but in fact had decided on a completely different career now.

The sawmill yard, with beams in the foreground and floorboards and pallet making workshop beyond.


The sawmill mostly deals with oak (97% of their output), but will sometimes mill Douglas pine (2% of output, referred to in French simply as 'Douglas' and pronounced 'doo-glass'). The final 1% is made up of local pine and poplar. The longest beams, of twelve metres and more, are a real challenge to transport, and Rémy Brégea remembers how the beams for the chapel at Windsor were as long as the truck transporting them. They don't only deal with big prestige projects though. If you are restoring a house and need beams or lintels, they will be happy to supply them. They also make flooring and, quite pragmatically, pallets. I asked the hypothetical question, 'How much would a 10 metre long, 400 mm thick beam suitable for our graineterie cost?' That would be about €2500 (plus tax), and a smaller, 3 metre by 200 mm beam would be around €80. 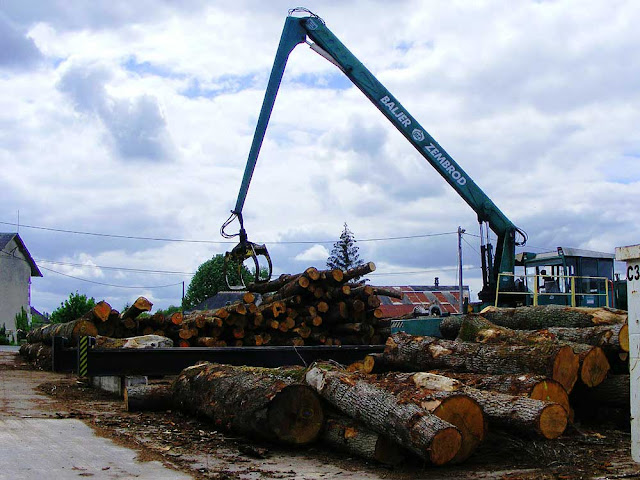 Logs are chosen to make floorboards by a worker operating a grabber, installed in 2000.

Logs on a conveyor heading for the debarking machine, dating from 2008. 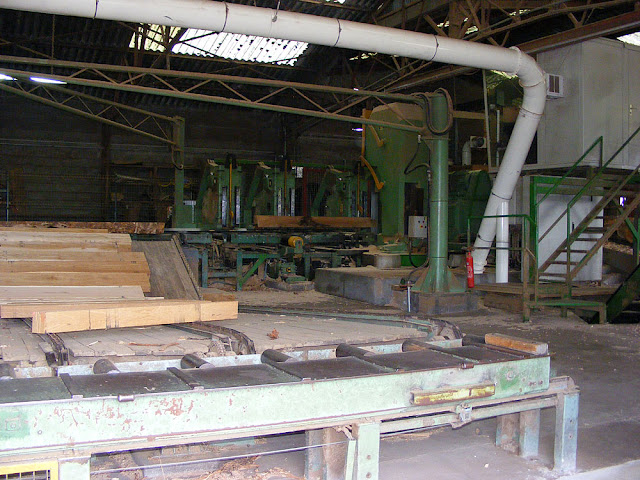 Thick pieces of sawn wood on the left are further machined into floorboards (at the back, machine dating from 2006). Then they are sent to the trimmer, a machine from 1970.

The trimmed floorboards are stacked neatly to the left behind the worker, the trimmings chucked on a cart to be sold later to a pellet manufacturer.

It's amazing that the Windsor Castle's architects had to come to France to find the beams called for the restoration of the chapel.

French oak forests are managed differently to British ones. It doesn't particularly surprise me. Likewise for things like silk damasks -- that would come from France for a restoration project in the UK because it no longer exists manufactured in Britain.