Collapsing in the Street

Back in March I got my now regular notification to turn up at the blood bank when they would be in Preuilly on a certain Saturday for their quarterly visit. On the day I had breakfast (a pain au raisin and a mug of hot chocolate) and trotted down to the salle des fêtes (village hall) to do my duty. I'm O- so they always like to see me.


The female doctor who did my pre-donation interview to check where I'd been and what I'd been up to in the last 3 months, just to make sure my blood was safe, was fascinated by the name of my birth place and went round inviting all those present to try to pronounce it. Nobody got it right of course. 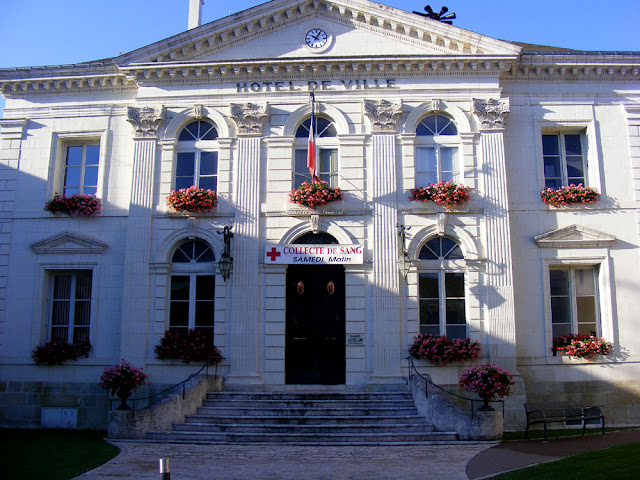 The town hall with the blood bank banner across the top of the front door.

Then whilst giving blood I had a conversation about Brexit (what else...) and the Queen and whether Australia should be a republic. This is fairly standard stuff, a conversation I have about once a month with French people these days.


Once my 500 millilitres of the red stuff was siphoned off I emerged to eat my choice of the wide range of food on offer -- everything from air dried ham and cheese to yoghurt and fruit salad. Stupidly, I restricted myself to a juice and a fruit salad, then far too quickly got up to leave. I had places to go and people to see.


Unfortunately, the street the salle des fêtes is on is quite steeply sloping. I made it as far as the town hall, about 50 metres and had to sit down suddenly, on the steps of the men's public toilets. After about 10 minutes two police officers found me. They asked if I was alright. I explained that I had just given blood, which entirely satisfied them. They remained chatting and discretely assessing my state of health. Then Marie-Jo, one of the deputy mayors, emerged. By this time it was raining and she was shocked to see me obviously unwell, so assisted me into the town hall. I barely made the door and fell onto the nearest chair. Of course there was a crowd of people getting their finger prints done and other official business. Marie-Jo moved me to a meeting room and laid me out on a row of chairs. Then she called the doctor.


The doctor arrived and checked my blood pressure. I had no idea it would go so low -- no wonder I was so faint! He put my feet up on a box and we waited for me to stabilise a bit. Then Marie-Jo found a somewhat antiquated wheelchair. The poor doctor got to wheel me down the very steep hill of rue de république and back into the salle des fête. It is a measure of how unwell I felt that I was not in the least frightened by this operation. 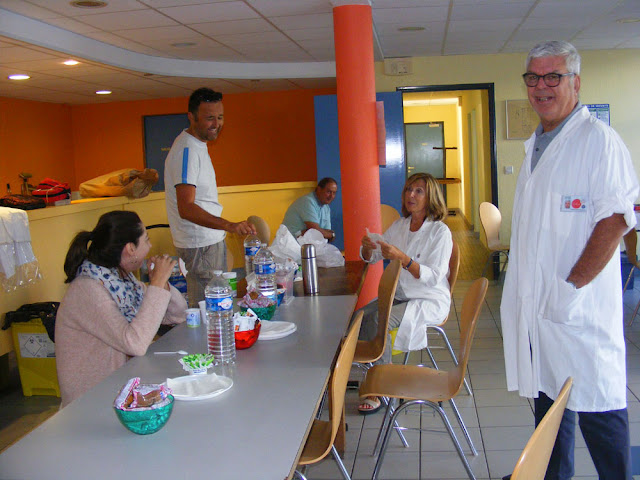 The doctor on the right is the poor man who got to wheel me down the hill.

In the meantime, the doctor had phoned Simon and I spoke to him to ask him to come and pick me up. According to Simon he didn't recognise me and nearly asked me who I was on the phone (I'd done the classic 'it's me' greeting). By the time he arrived I was laid out on a stretcher with my feet in the air, in full view of all the other donors, with one of the doctors coming over every 10 minutes or so to see how my blood pressure was doing.


Finally, I was allowed to sit upright and move to the table, where I ate some more food. After a while the female doctor asked me if I was bored now. I said 'yes', and she laughed and said that was a good sign. Very soon after I was allowed to depart with Simon. I had to give the market a miss for that day.


I made sure to rest for the remainder of the day, but the next day was able to go on a 10 kilometre hike with friends. The day after that though I was very tired and out of breath with daily activities such as going up and down the stairs. I got both a follow up letter from the blood bank, to say they would cover the cost of any pharmaceuticals if I felt the need afterwards, and the doctor who had wheeled me down the hill rang to check I was alright.


I've learnt my lesson now. In future I'll be having a big breakfast on blood donation days, and eating lots at the blood bank and making sure I stay there at least half an hour after I've given blood. I ran into Gérard, one of the other deputy mayors, a few days later and asked him if he'd heard about my little episode. He looked at me and cleared his throat and said dryly that, 'err, yes, it had got around'.

Glad no dire consequences to that episode.

Oh dear glad you have recovered. Reminded me of Tony Hancock's Blood Donor!!

It's not uncommon for people to faint after giving blood. I think they are used to it.

I was interested in how concerned they were and how close an eye they kept on me.

i had to stop giving blood since I felt so faint and my doc said it was prob time to quit...perhaps age had something to do with it in my case

Good that everyone was looking after you along the way.

You are not allowed to give blood here after you turn 70, probably for this very reason.

Yes, it was very comforting.

We're glad you're back to normal. The Red Cross here would be in trouble if the cutoff was age 70. Blood drives in this area are always afternoon events so people can donate on their way home from work.

So there isn't a separate blood bank organisation in the States? It's done here by EFS (Etablissement francais du sang) The Red Cross here just concerns itself with helping the disadvantaged so far as I know.