Caught Up in the Hunt

The first hunter appears, followed by two supporters on bicycles.
A Roe Deer had crossed only a minute before.

The weather was very windy, with rain threatening, for our Thursday 7 March walking club outing, so Joël opted to take us to the forest around l'Abbaye, a farm and forestry enterprise near Le Grand Pressigny. He figured the forest would protect us from the wind, but what he didn't realise until we got there was that we weren't the only group using the forest. We were sharing it with a mounted hunt and a pack of hounds after deer. Luckily these mounted hunts are not permitted to carry firearms, so there is no danger of being shot in this situation. This was my first real hunt, so I was very interested and took lots of photos. I discovered later that the whole thing had made Simon really uneasy. He didn't like being in close proximity to horses or dogs in hunting mode and he thinks hunting for sport is inexcuseable. He wasn't alone -- about half our group were anti-hunt, but it was clear that the hunt here doesn't have any problems with saboteurs, and we were all polite and friendly to one another.

The front of the pack crossing the main forest track. We had seen the deer crossing a parallel track to the right some minutes before and there had been lots of horn signals sounded.

Still some hounds and riders to come. 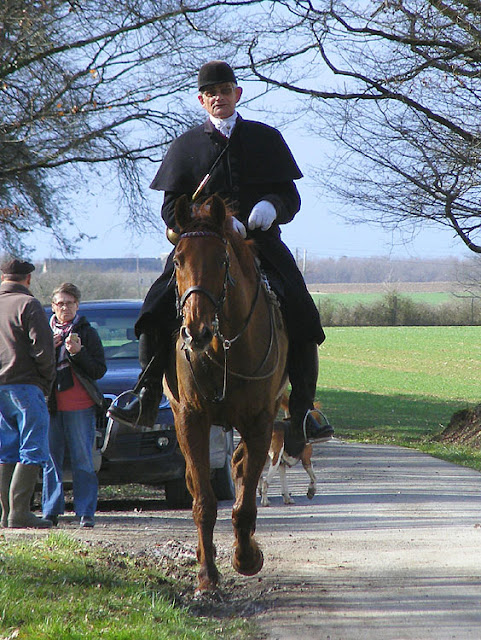 Not at all bothered by having his photo taken, I got a smile and a 'bonjour' from the hunt master.
The couple behind are part of a small group of spectators strategically positioned at the end of the main allée. 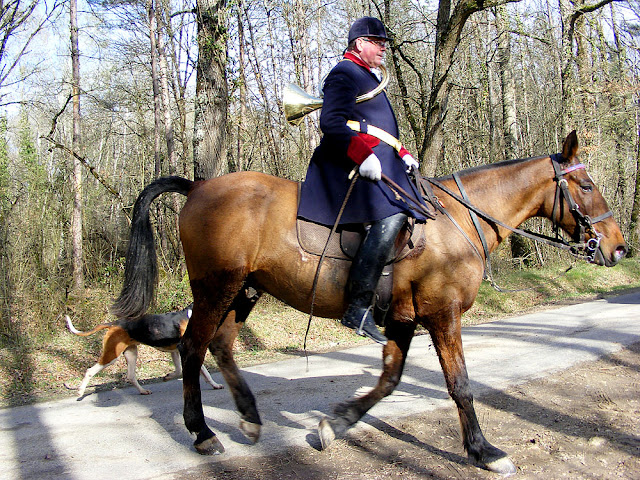 The horses were clipped except for their legs to stop them overheating in their winter coats. The huntsmen do not wear 'pink' like English fox hunters. These huntsmen were wearing black, navy blue, green or camel. I commented on how much I liked the dogs and was told 'ah, well, they are champions!' This type of hunting is called chasse à courre in French and the prey is always wild deer or boar, not foxes. The prey is killed with a dagger by one of the huntsmen.

The mounted huntsmen and hounds weave their way through our walking group,
wishing us a friendly 'bonne promenade !'.

I was quite surprised at how tolerant of our presence the huntsmen were. I fully expected to get told off for 'disturbing the game', but there was no hint of that. I commented on it to Denise who said we would have had a completely different reception if it had been a 'beat hunt', where the hunters are on the ground, carrying firearms.

Although we saw deer five times during the afternoon, this one of the last of small group of Red Deer disappearing over the horizon is the only photograph I managed to get.

And in case you were wondering, my view about this sort of hunting is that in the absence of wolves, mounted hunts with dogs are a reasonable substitute for the maintenance of the ecology. It's not just about killing the deer, but moving them on so areas of the forest can regenerate, keeping them alert and reducing their breeding rate.

I have never seen horse and hound hunting in our area. It is all on foot with guns so far as I have seen. I am very wary out walking off main roads during the season and I make sure I wear something bright!!! Cheers Diane

My view on hunting is similar to yours... but I prefer to see used a silenced, high-power rifle at the hands of the marksman.
However, the tearing up of the groundby hooves, etc. is also valuable for the establishment of plants that require a more open haitat.

Moons ago I pointed out to someone who was moaning about tyre tracks in a wildlife rich terrain... so I pointed out a few plants growing in an old track... that wouldn't have been there if the ground hadn't been opened up! He stopped moaning after that... and I noticed he had begun to look at the older tyre marks.... success!

I wear high vis in hunting season too.

Good point about the additional benefit of the poaching by the horses.

As my friend Christine has reminded me, these comments about horses in the environment totally do not apply in Australia, where brumbies are ruining wilderness. Australia is a land of soft footed animals and hard-hooved creatures do not benefit the environment there.

Had to look that one up... Brumbies... It came up as a rugby union team... based on wild horses!!