Frankie Kicked a Mine

The sound track to my childhood was the Vietnam War. Sixty thousand Australians served in Vietnam and there is a memorial to them on Anzac Parade in Canberra. Australia's involvement began in 1962 and lasted until 1973. Australian troops went back briefly during the fall of Saigon in 1975 to evacuate Australian embassy staff. 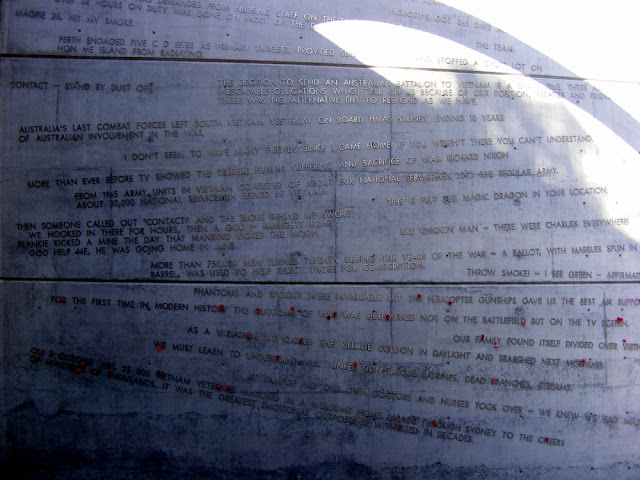 It is a memorial you can walk into and be enclosed by. There are six benches inside and around the space created by three concrete stele set into a pool. Each of the benches is dedicated to one of the men still listed as missing in action at the end of the war. Five hundred and twenty one Australians were killed in the conflict and about 3000 wounded. The names of all the Australians who died in Vietnam are recorded on a scroll which is sealed within the memorial.

One of the stele has quotations from diaries, press releases and songs. Very few are attributed but several are very well known and their source would be recognised by many Australians.

Troops waiting to be airlifted. 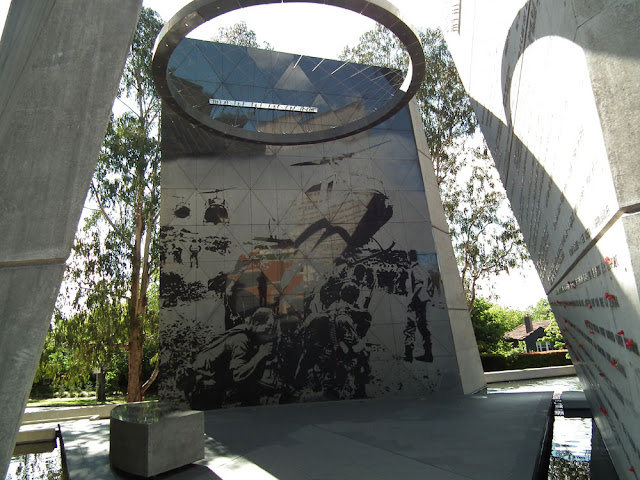 The stele at the back is etched with a reproduction of a photograph of troops waiting to be airlifted by US helicopters back to their base at Nui Dat after a cordon and search operation.

My uncle Ric was lucky to avoid the draft (whether you were called up was a lottery, based on date of birth for men in their 21st year), and Simon can remember Darwin airport heaving with soldiers en route to or from Vietnam when his family landed there when they emigrated to Australia from England in 1967.

We will remember them.