Snakes in the Loire Valley

For the last ten years the most visited blog post in Days on the Claise has been Snakes in France, by a considerable margin. This post is a sort of remastering of that post. 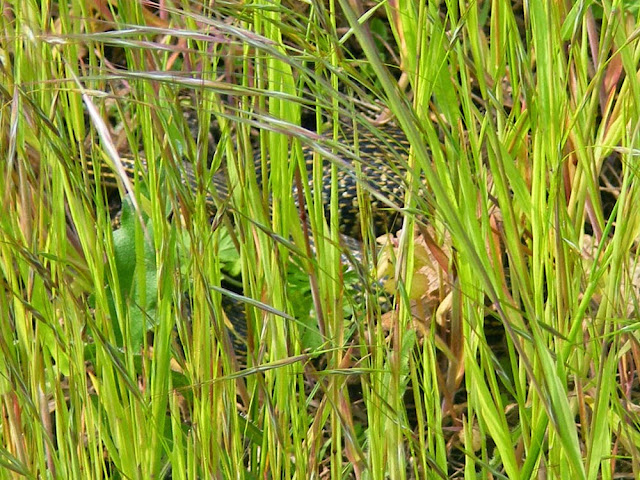 A Western Whip Snake, almost hidden, basking in our orchard.


There are about a dozen species of snake in France but only two (or in the south, three) species in France are really venomous - these are the Vipers or Adders. (To be absolutely accurate, one species of grass snake is venomous too, but because of the way its fangs are positioned, could not physically get enough poison into a person to do any lasting damage.) For comparison, there are 3 species of snake in the British Isles (one poisonous), and Australia has about 140 species of terrestrial snakes and 32 marine species. About 100 Australian species are venomous. 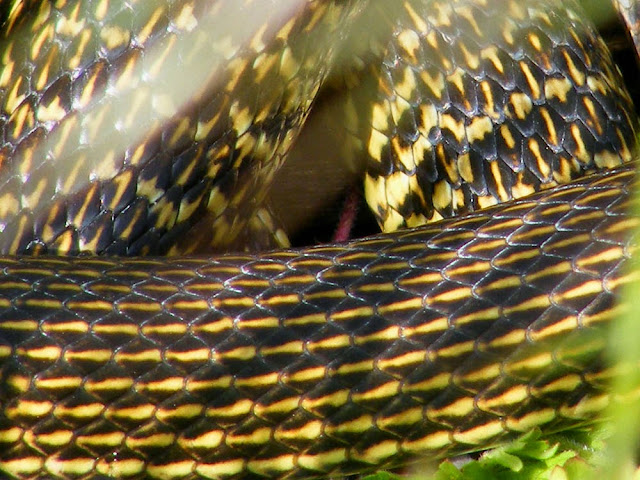 Detail of the scales and pattern on our orchard resident Western Whip Snake. 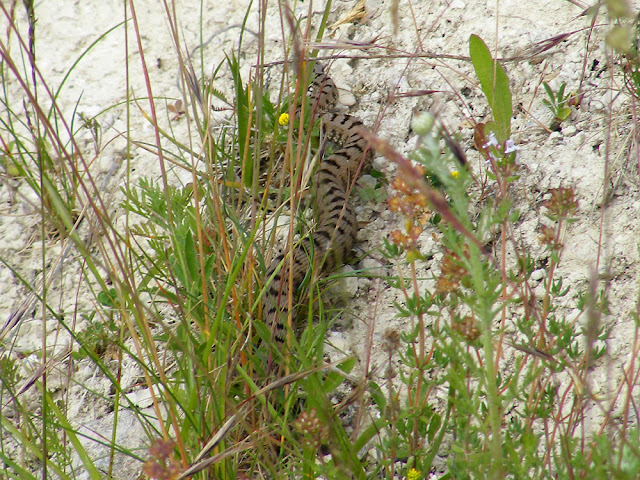 
Vipers and Adders can be identified most reliably by their slit shaped pupils, but are also usually less than 50cm long, grey or reddish brown with a black zigzag pattern down the back. They are quite venomous, but almost never fatal. If bitten by any snake, the most important thing is to stay calm and get to a hospital. You will probably know if the bite is poisonous fairly quickly, as the area around the bite will hurt like hell and swell alarmingly. 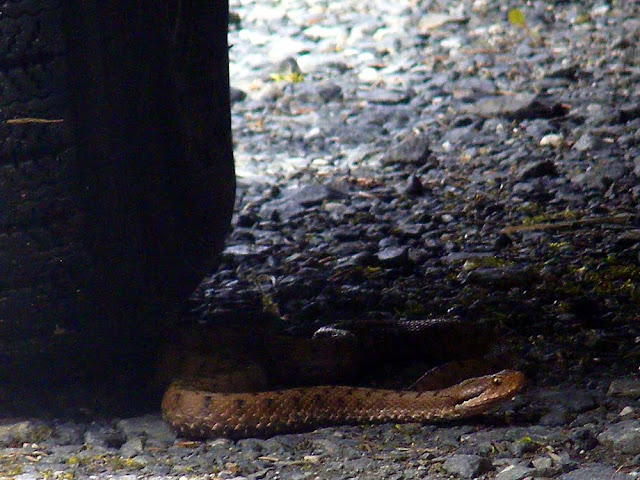 Asp Viper under a car in a driveway on the edge of Chateauroux.
You can see the characteristic slit pupil.


If you or a companion are feeling particularly cool, calm and collected (as if!) photograph the snake, to help ID it at the hospital. I don't suggest trying to catch it or kill it - you risk being bitten again, and anyway, all snake species in France are protected. 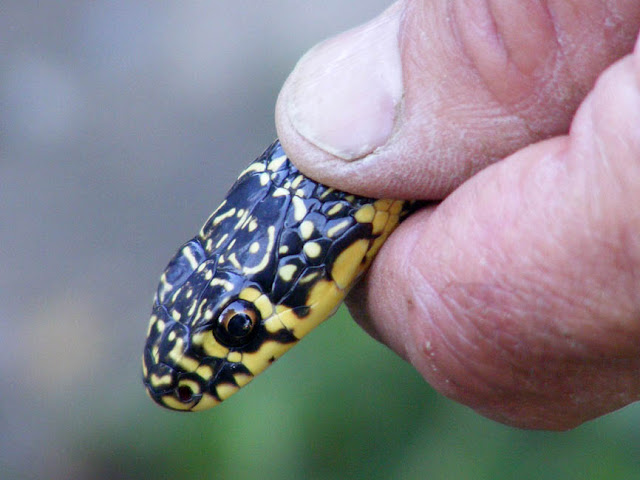 Close up of the head of a Western Whip Snake, showing the characteristic round pupil. 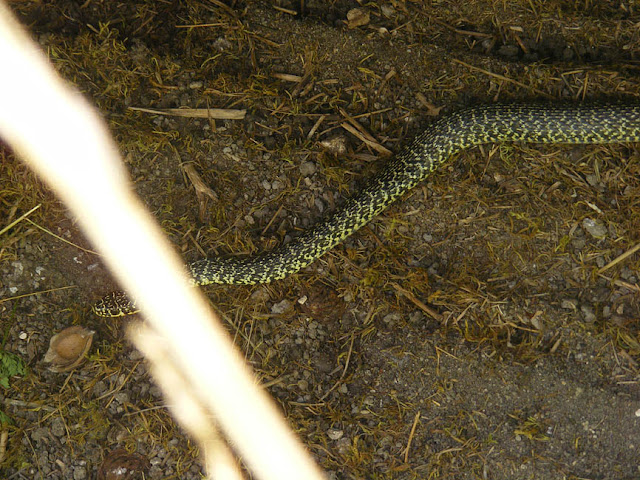 
Non-venomous snakes have round pupils. Any snake longer than 50cm is unlikely to be venomous and any snake longer than 1m is certainly not going to be a venomous species (in France, that is). Any snake that exudes a ghastly smelling substance is not venomous - it is a grass snake of some sort. (The term 'grass snake', used in the general sense, is the same as the French term couleuvre. Grass Snake, in the specific sense, is the species Natrix natrix). 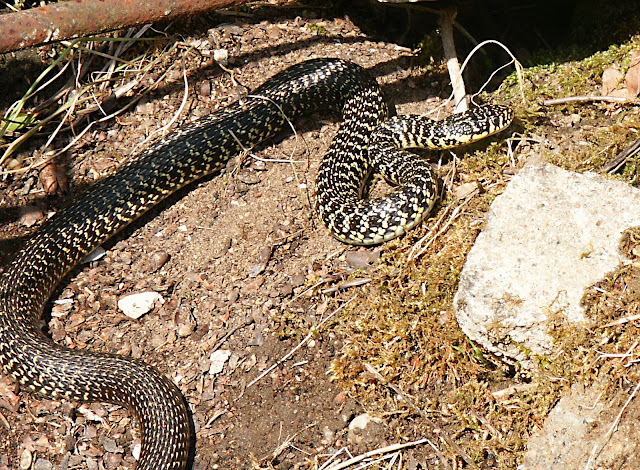 A Western Whip Snake photographed in the Charente, to the south-west of us.
It had come to drink at a roadside ditch in a hamlet. 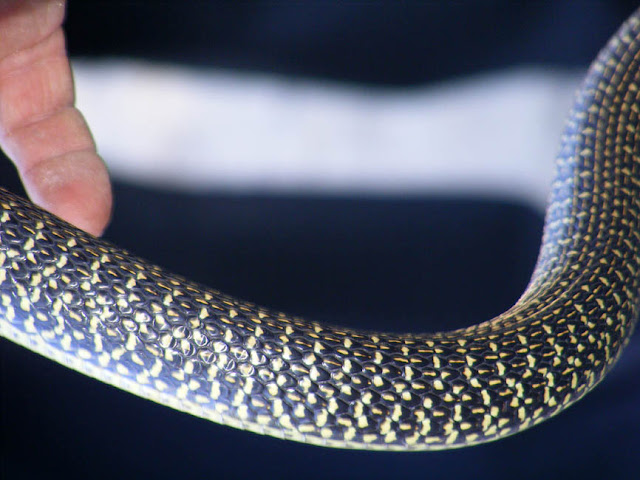 Close up of the back of a Western Whip Snake.


My personal experience in France is that you would only ever meet a snake in a rural area or in urban areas that are close to the countryside (ie small villages), and it is by no means an every day occurance. You will also see them just as much as roadkill as live. You are most likely to encounter the Western Whip Snake -- it is by far the most abundant species. Others which are also not uncommonly encountered are the Asp Viper (that's the venomous one), Viperine Snake (the Asp Viper's non-venomous lookalike) and the Grass Snake. We have had young Western Whip Snakes in the house, I've seen them in the streets of Preuilly, on forest tracks and in overgrown gardens. Grass Snakes seem to be a lot shyer and I only see them occasionally, usually in the forest or as roadkill, although they are also attracted to water. Vipers like hot sites with safe places to bask and hide (including overgrown gardens, chalky cliffs and forest tracks). Viperine Snakes can be seen in rural gardens, around buildings and near water. 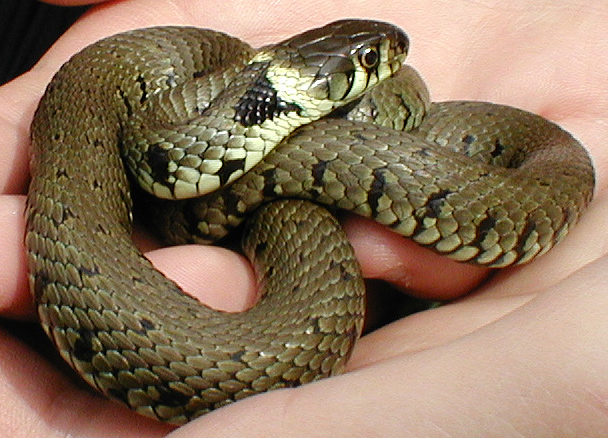 A Grass Snake.
(Note: This particular specimen is not French, but was caught in Shropshire when I was doing my Reptiles and Amphibians module at university. It was a rather cool day, and the snake realised quite quickly that being held in nice warmblooded hands was not all bad.)


Snakes are extraordinarily cryptic (which is the techie term for well camouflaged). They choose their basking places with great care, and unless you are really tuned in or very lucky, you just won't see them. They will also just disappear under the leaf litter or a log in less than the blink of an eye if they hear anything approaching. They will hear you long before you see them. If you are surveying for reptiles you need to be already familiar with the site so you know where the likely basking spots are, and you need to check them out with binoculars from a fair distance if you are going to get any real idea of the snake population on a site.

Nice post... shame Jill doesn't allow links to our blogs from FaFiF... this would be useful knowledge for most readers.

Deleted due to a missssing 's'!

I assume she thinks Chris's blog/website supplies all the info necessary.

Sad point of view, tho'

The only one I have seen here I thought was an Aesculapian Snake but I now think perhaps I am wrong and probably a grass snake. I will send you a photo to confirm. Diane

Having seen your excellent photo I think you were right the first time.