Walking in the Wind 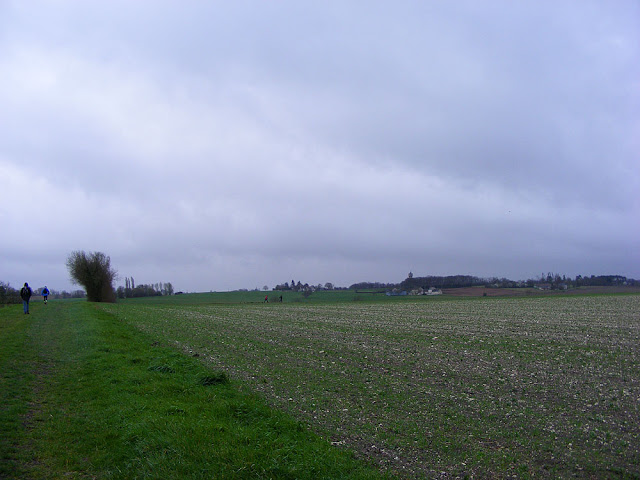 Once walking from left to right across this view we were walking into the wind, which was tough.


On 10 March we went Inter-Club walking again. This time it was Ligueil's turn to host, and the reward at the end was rousserolles (pillow shaped doughnuts which are a speciality of this area). The weather was unpleasant, with some rain and 40 - 60 kilometre an hour winds, so not many people turned up. The wind persisted all morning, but luckily the rain had stopped by about 8:30 am when the shorter, 15 kilometre walk set off. We opted for this walk rather than the 24 kilometre one because I was trying out for the first time my new shoe inserts made by the podiatrist to try to combat my heel spurs. We started out at quite a lick, doing a kilometre in 9 minutes, but by the end I was shuffling along and taking 15 minutes to cover a kilometre. Overall we averaged about 5 kilometres an hour, so not too bad.

This long hedge provided much appreciated protection.
This end was Blackthorn, the other was Cornelian-cherry.

This appears to be a perfectly ordinary vine hut that, like its peers, has fallen out of use. Until a couple of years ago it was surrounded by brambles and in a sorry state. The owner wasn't interested in keeping it up so a group of local history enthusiasts set to work tidying and repairing, using reclaimed tiles on the roof. The reason they didn't want to see it fall into disrepair was because this hut has a very particular history. It was on the Line of Demarcation and if you wanted to pass it during the Second World War you had to present your identity papers. Nowadays the sole external indication of its significance is a bracket on the western gable, which supported the incoming telephone line, and internally, a concrete floor that dates from this time. German soldiers, and later French customs officers used it as a comfortable base from which to patrol, in pairs, with a dog. The locals found the customs officers more difficult to deal with than the foreign soldiers, because the locally recruited officials knew the countryside better. The customs officers were smart enough to patrol at irregular times and to hide in the woods to catch black marketeers transporting goods across the Line. Nearby, in the hamlet of Nizerelle, was a group of French soldiers manning their side of the border. Beyond this post at Noizay, across to Cussay, crossing the Line was easier, because of the configuration of the land and numerous crisscrossing small tracks. 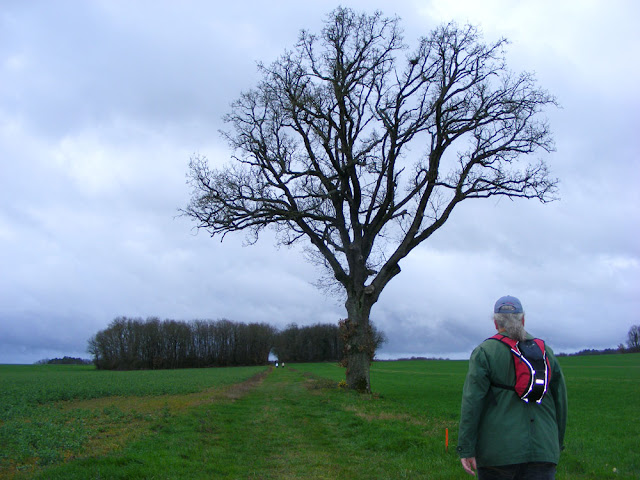 At the halfway refreshment break, set up on a farm driveway. Snacks included rillettes de Tours on baguette, pain d'épices, pound cake, jam to spread on the cake, prunes, dried apricots and chocolate. 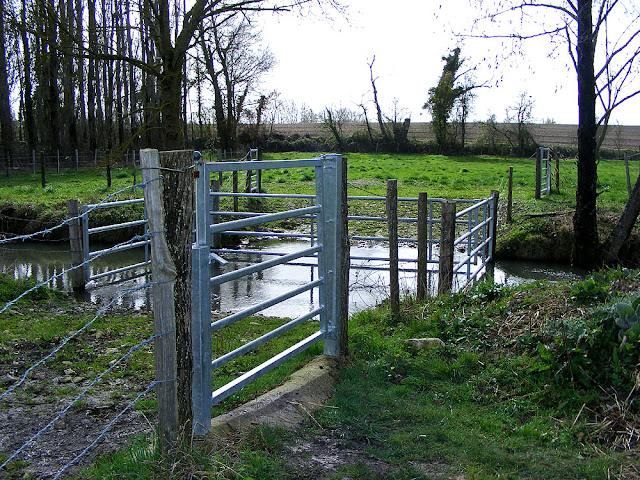 A clever arrangement of gates and fencing to allow access for vehicles and walkers whilst protecting the river from poaching by stock coming to drink. On a small wetland area in Ligueil. I wonder if this is Yohann Sionneau, the River Technician's work? He's based in Ligueil these days.

This small wetland is in Ligueil. I had no idea it existed until we came past it at the end of our walk.

What a wonderful walk.... I miss my walking group. Here it's just my neighbor and me, doing basically the same 13k walk every week - exercise and gossip lol