Slime Mould in the Orchard

Dog Sick Slime Mould Mucilago crustacea (Fr. Mucilage crustacé) photographed in our orchard in November. This is a mature one. In the stage before this they are butter yellow, in the stage after they are black. 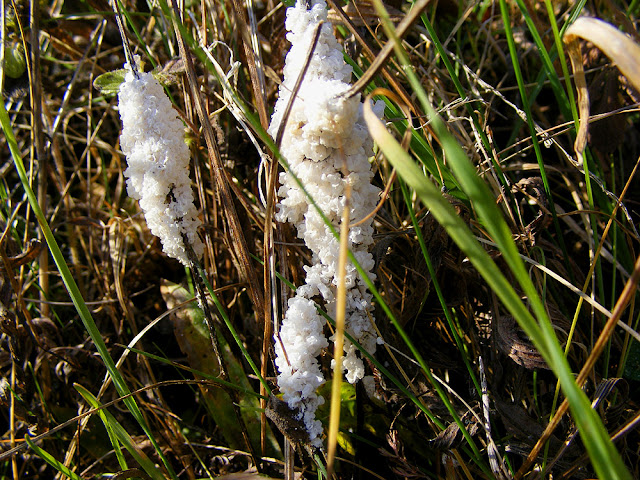 The Dog Sick Slime Mould colony in the orchard has lots of outbreaks of fruiting bodies such as this one pictured. They are abundant in the autumn, but there are a few in the spring too. This organism is usually referred to as a fungus, but in fact it is a myxomycete in the family Didymiaceae. Slime moulds are neither plant, animal nor fungi, but primitive single celled organisms like amoebae. They eat soil bacteria and slowly migrate across their habitat. Every now and then they clump together to form fruiting bodies such as the one above. The white sponge like material you see here is made of calcium crystals and hides a core of black spores. If you touch the organism it will release a cloud of very fine powder. They are almost always seen on grass and are very widespread and quite abundant here.

I suppose it's the yellow stage that makes it Dog Sick.

An usually fascinating post of an organism which is neither a plant, an animal nor a fungus. Your explanation is great! You should rewrite the Wikipedia page on Mucilago Crustacea.

potty: I guess so.
chm: thanks. They are interesting.