Cobweb Hen and Chicks Sempervivum arachnoideum (Fr. Joubarbe à toile d'araignée) is an Alpine houseleek that we saw in the Haute Pyrénées in July 2021. 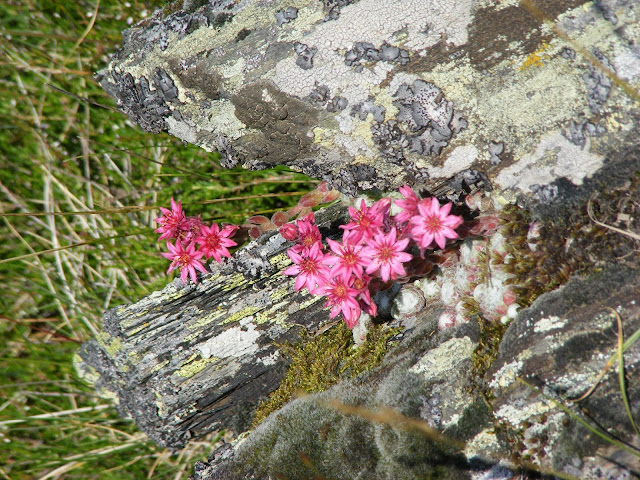 It's a ground covering succulent that forms rosettes of leaves and has beautiful bright pink flowers. It grows in full sun on poor soils and will withstand extreme cold and periods of drought. It is a slow growing plant that takes advantage of tiny fissures in the rock. It is native to the mountains of Europe, and protected here in the wild.

UPDATE: I've just seen on the new this morning that Cauterets is totally isolated and cut off, by road and rail, with no internet and the phones are out. It's due to heavy rain causing flooding and three large rockfalls. One person has been evacuated by helicopter because they need dialysis. In the Hautes Pyrénées in general there has been widespread flooding over the past couple of days, with 20 people rescued from cars trapped in the floodwater. No deaths thankfully.

These lovely pink flowers are recognizable right away. Even though they originate in mountains, I think they can grow anywhere.
Interesting Wikipedia Sempervivum page. Never too late to learn something new!

chm: they are really attractive, and yes, I think super hardy.

I grow them in pots with other succulents, they are indeed great looking and sturdy. I had no idea they were native to France and the Pyrenees!
bonnie in provence

bonnie groves poppe: they are great in pots.