The Chenonceau Chapel windows, although stained glass, are not particularly old. The five tall narrow lancet window bays that curve around the apse date from the 16th century, but the stained glass they hold dates from 1954.


The saint on the left is clearly George, but I haven't worked out who is on the right. 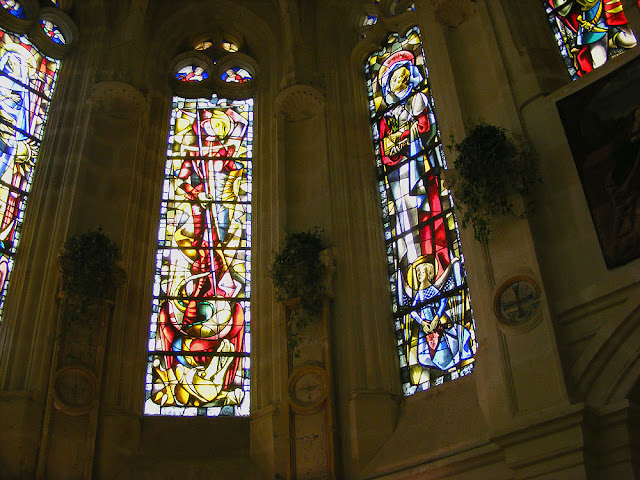 When Marguerite Pelouze was the owner in the 19th century she had two smaller paired windows added, between the original windows and the gallery. They were based on drawings by the artist Louis Charles Auguste Steinheil, who specialised in medieval art and had contributed to the 19th century restoration of La Sainte Chapelle in Paris.


All of the glass, both 16th and 19th century, was destroyed on 7 July 1944, when an American plane bombed the chateau. After the War the renowned 20th century French master stained glass artist Max Ingrand was commissioned by the Menier family, owners since 1913, to create new windows for the chapel. I think these are his own design, rather than working as usual with the designer Jean Gourmelin (many thanks to my friend Pierre who phoned Gourmelin's widow to check the details of his collaboration with Ingrand.) Ingrand and Gourmelin worked together after the War on the windows of the chapel of Saint Hubert at the Chateau of Amboise. To recognise Gourmelin's work, look for the little dog with the curly tail, who is his personal 'signature', and I will have to visit both chateau to check for it.


The windows are a great example of modern heritage conservation practice. They are clearly modern and no attempt has been made to create 16th century lookalikes. This is considered the appropriate solution when there is no possibility of repairing the original fabric of a building, and an element must be replaced. Best practice is to create the best possible work that is contemporary to your own time, so that the buildings timeline is respected and the visitor is not deceived. Modern additions must respect the aesthetic and spirit of the building, but should be identifiable as dating from the period they were made.

Lol, Susan! Ingrandes is the name of several communes in your region. The name of the maître-verrier is Max Ingrand.

Ooops! You are right. I'll correct.

The saint next to George killing the dragon is Saint Antoine de Padoue according to:
http://www.montmartre-secret.com/article-35852460.html

OK, lily and book. Got it. Thanks for the link.