Graffiti in the Chapel of Chenonceau

Like most chateaux in the Loire Valley Chenonceau has quite a lot of intriguing graffiti. The most famous is in the doorway of the chapel. Rather curiously for a chateau in the heart of France, it is in English, and is supposedly the work of Mary Stuart's Scottish bodyguards. This provenance is probably rubbish, but the two phrases one can see are nonetheless interesting. As is a third panel of graffiti, clearly part of the same set, inside the chapel on the north wall.

There could have been Scots in the chateau in 1543, the date carved alongside the graffiti. It was owned by Francois I at that point, and relations with Scotland were close. But if the date is correct then it wasn't one of Mary Stuart's bodyguards. Mary, aka Mary Queen of Scots, didn't arrive in France until 1548. At the time, Scotland was a staunchly Catholic country, but by the time she returned twelve years later, Protestantism had taken hold. 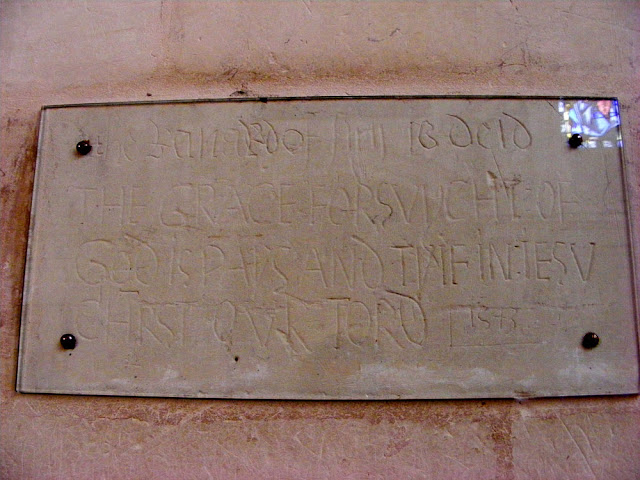 Ignoring the top line, which is illegible and in a different hand, the wording appears to be 'THE GRACE FORSWCHT OF GOD IS PAYS AND TYIF IN IESU CHRST OVR TORD', dated 1543. I think that translates as something like 'The grace [?] of God is peace and life in Jesus Christ Our Lord'. I initially thought the mystery word might be the German word forscht and could be translated into English in this context as 'sought', so the phrase becomes 'The grace sought of God is peace and life in Jesus Christ Our Lord'. But luckily I know a Scottish medieval historian, and he suggested the word was forsicht, an arcane Scots form of 'forsooth' (which in modern English would be 'in truth' or 'indeed'). So the phrase is possibly a garbled version of a verse from St Paul's letter to the Romans, and should read "Forsooth the grace of God, by Jesus Christ our Lord".


Grace is a tricky thing, especially at this point in history, and it seems that the person who scratched this on the wall has been influenced by the new Reformist ideas being secretly disseminated all over Western Europe. I think if you wrote this and were caught you might be subjected to some frightening and uncomfortable questioning. The phrase following this in the Wycliffe Bible, the most popular Reformist text, talks about how the soul serves God's law, but the flesh gives itself over to sin -- a core Reformist concept. But if the graffiti is Reformist it could be one explanation of the somewhat peculiar English.

The phrase may look like English, but it seems likely it was not written by someone for whom it was their mother tongue (and that would include Scots at this time). If they were repeating a phrase from a Reformist text they had read or heard, then they were probably reading or hearing it in English, and perhaps not from a native speaker either. Switzerland at this point was a haven for Protestant activists and they had printing presses. Much of what they were printing and distributing was in English, as a lingua franca to reach and influence the maximum number of people. So our graffiti writer might not have quite remembered English grammar or spelling correctly.

This early Protestant Scot, if that is who is responsible for the graffiti, might not have owned a copy of the Reformist Bible himself -- that would be too dangerous. Instead, he might have heard these words spoken and memorised them. There might be a sort of Chinese whispers effect going on, where the words are passed on orally and not always repeated accurately.


But to be honest, the real mystery is why the graffiti is still there. Two decades after it was inscribed the chapel was refurbished by Catherine de Medici. Why was the graffiti left there and not erased? It would have been the work of minutes to simply rasp it off with a traditional block smoothing tool. And why did all of those subsequent owners, every one of them Catholic, leave it there if it expressed a Protestant idea?

My medieval historian friend suggests that after the Council of Trent in 1545 - 1565, during which the Roman Catholic Church developed and laid out its response to Protestantism, even Catholics might have been queasy about erasing a religious text, no matter what its origin.

Many thanks to Niall Duthie who condensed a very challenging religious concept into a few easy to digest paragraphs, and made very helpful suggestions regarding the Scottish aspect of this mystery.

What would sir Arthur Conan Doyle have said?

Best to Niall and Antoinette.