Notice Something Missing at Chambray?

On Monday we drove through Chambray lès Tours for the first time in months, and realised that a certain landmark was missing. Set high up on a mound in the median strip of the D910 was a historic signalling device called a Chappe telegraph, part of a type of military semaphore system. It was removed for restoration in December (which just goes to show how long it is since we went to Tours!). 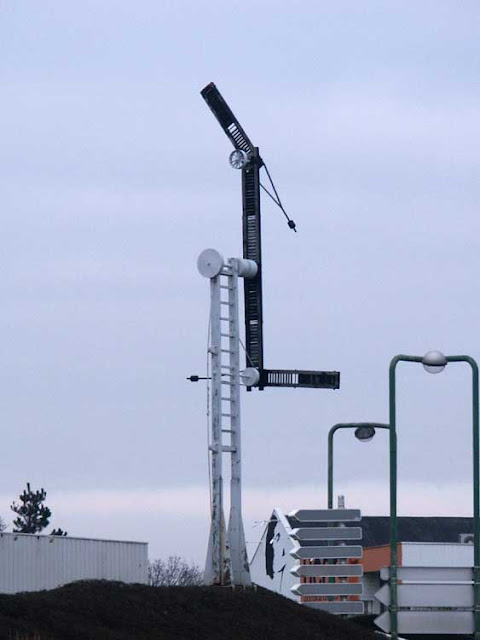 The signalling device in the middle of the road was in fact a replica. Claude Chappe put his original communication system in place during the Revolution, in 1794. Initially adopted by the military, the Chappe telegraph was a network of articulated semaphore arms set about 15 kilometres apart. The number of possible combinations of arm positions gave messengers the use of 8464 encoded words.


The one at Chambray was erected in 1822 as part of the Paris-Bordeaux-Bayonne network. It was placed on a pyramidal tower and observers used telescopes to read it from Montbazon in one direction and Tours in the other. In Montbazon the semaphore was placed on top of the castle keep. In Chambray the area around the device is known as Le Télégraphe and there is a street named after it.


The invention of the electric telegraph in 1845 meant the end of the Chappe telegraph. Today the modern equivalent is the mobile phone mast erected on the site of the former Le Télégraphe water tower.

Hi Susan. I hope you won't mind but telegraph is a masculine name in French, so it should be le télégraphe. French is so confusing, orthographe is feminine!

Dammit! You are right!

Interesting and fascinating that you can get 8464 words from it... The $64,000 question is do they still exist in written form OR Does anybody actually know them?

There ya goes Colin - knock yourself out 😀

Thanks Simon Will keep it to hand just in case I need to use it one day!!