Swimming in the Anglin

Obscured by the trees is a prehistoric site of international significance. 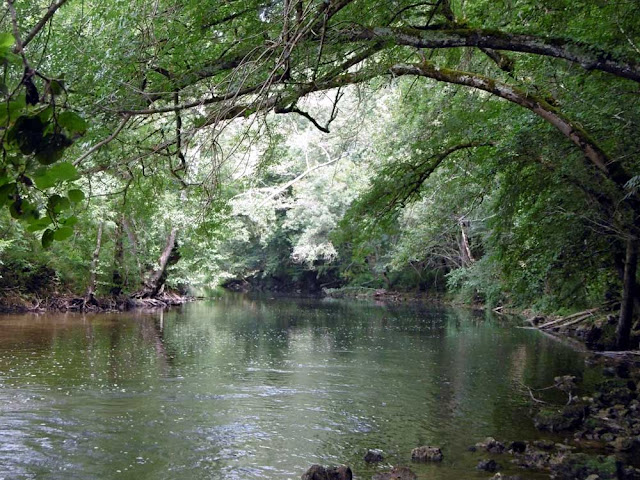 There are lots of places to go 'wild' swimming around where we live. Most of the rivers have designated swimming spots. The Loire itself is a rather dangerous river to swim in, but many of its tributaries and rivers in the Loire catchment have wide deep calm sections that are very appealing.

Old stone cistern on the side of the river. 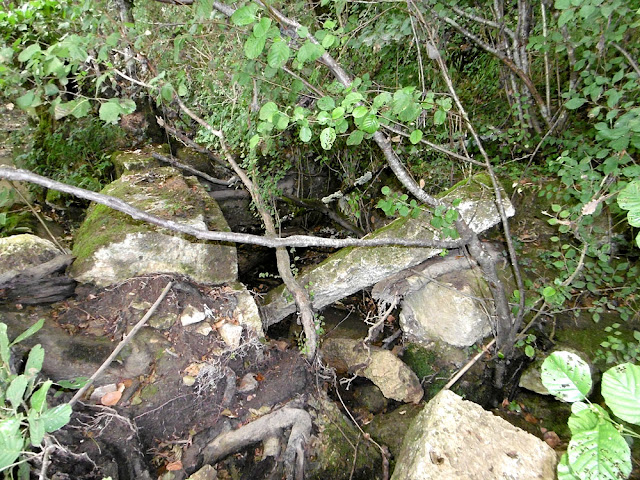 A week ago, just as the heatwave was coming to an end we were invited by Ingrid to go swimming in the Anglin. She had to go back to the Netherlands a couple of days later, so it was our last chance to be introduced to her favourite spot.

We were told that these stones in the shallows were an old fish trap.
It could date from anytime between twenty thousand years ago and a hundred years ago. 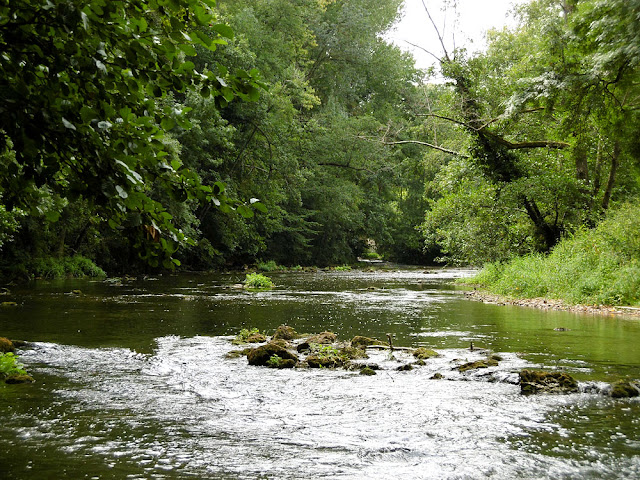 The Anglin has a wonderful public swimming spot in Angles sur l'Anglin, just by the bridge, very popular with locals and tourists alike. You can picnic there and canoe as well as splash around or even swim seriously -- it's big enough and deep enough to offer something for everyone. But Ingrid's spot is accessed via private property, and far enough out of town that visitors don't often make it there. A number of locals swim there every day, even during winter, and the owner is happy for them to do so.

Rocks in the river bed coloured by minerals.

We were absolutely bowled over by what a great swimming spot it is, with deep water for more than half a kilometre, so you can really swim. Along one side is high limestone cliffs and the other side is cattle pasture. The water the day we swam was warm, except where there are springs (and there are quite a few of them). There wasn't much current so swimming against the current wasn't much different to swimming with it. In total we swam about a kilometre, but it felt like more because you have to swim all the time, unlike in a pool, where you can stop at the end of the lane and can use the pool edge to provide impulsion every 25 metres. Huub went up and back five times to our once, so he swam five kilometres.

As for most wild swimming, you need footwear suitable for walking in the water, as there are places in the river you need to cross on foot. I also chose to wear a cap, to keep my hair out of my eyes, and goggles. Simon chose to keep his sunglasses on and eschewed goggles, Ingrid tied her hair in a topknot and wore goggles. Huub wore goggles too and did serious ploughing up and down while the rest of us pootled our way upstream doing a random mixture of strokes and mostly chatting and looking out for kingfishers.

Simon and Huub heading for the swimming hole. 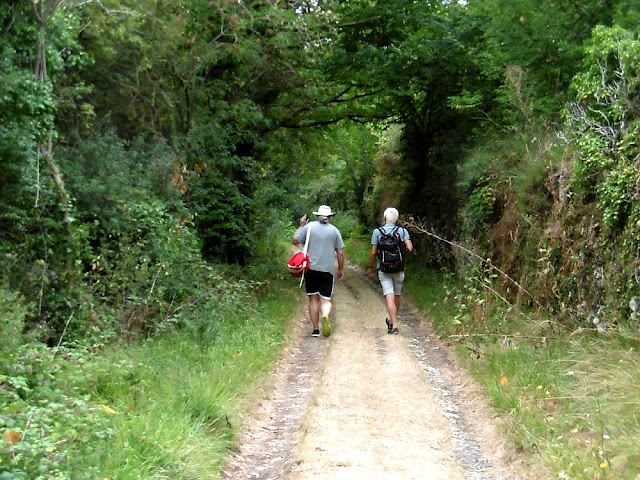 The water must be full of minerals because Simon ended up with a yellowish tide mark on his beard, and Huub's hair got stained too. Later we saw many river stones coated in either red, which we assume is iron, or green, which we suspect is copper. Near where we swam is a ford and signs of old industrial activity. Although we couldn't see it because of the trees, there is a major archaeological site on the cliffs, where carvings dating from twelve to twenty thousand years ago were found.

A large worked rock in the river, evidence of industrial activity,
probably in the 19th or early 20th century. 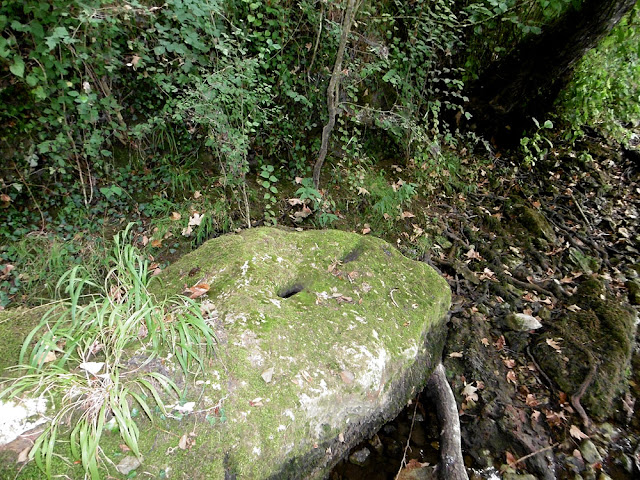 Photos are limited because we only had our little pocket camera with us, we want to be discreet about the location, and we were mostly swimming. It was a really wonderful experience, which we hope to repeat.

Public recreation area on the Anglin near the bridge at Angles sur l'Anglin
(photo taken in August last year). 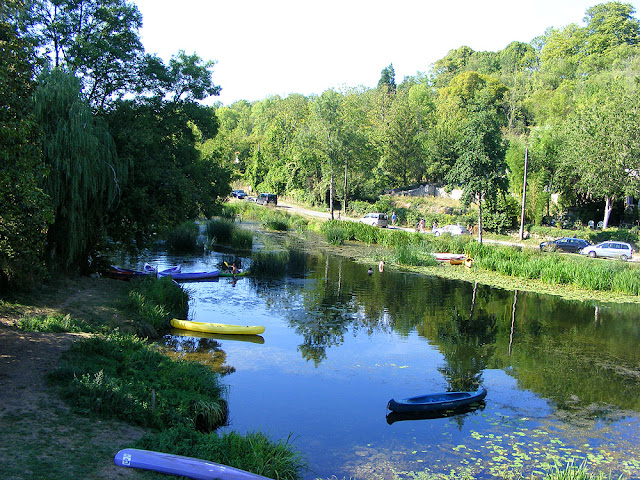 Can you? There was no obvious path that I could see from where we were.

Off topic - When you travel by car to England did you ever had a chance to visit the gardens of the Abbaye de Valloires in the Somme (80) department?

Talking about gardens did you ever go to the "Jardins Albert Kahn" in Boulogne-Billancourt near Paris. They are worth more than one visit. During the Occupation, I used to bike there with friends to enjoy the several themes: Forêt vosgienne, jardin japonais, forèt bleue, jardin à la française...

The Jardins Albert Kahn are close to the Bois de Boulogne and can be reached by Metro at Porte de Saint-Cloud.

Last I heard it was closed.

No, neither of them. I'll check them out online.

They are all closed.... it is funded by the same mob as the Abilly "Structure"... and their office in GP!!
They lost an educational grant last year....
which, to be honest, doesn't surprise me as they are terribly bad at self-publicity!!

The Roc aux Sorciers museum was funded by a grant to the PVCT? That seems unlikely! PVCT certainly administered the fund for the Archaeolab, and I know that money dried up last year. The Roc aux Sorciers has struggled and been closed for longer than that. It was barely open a couple of years before it closed again. I don't know where their funding came from. There was also a dispute between them or their funding body and the then municipal council in Angles -- who all resigned. I don't know where all that is at now -- presumably completely new municipal council by now. Other things in Angles lost funding too, but money was spent to spruce up the bar/store and that seems to be a success. That's my memory of it anyway.

What a fun outing ! I grew up swimming in the Mississippi so understand currents and other surprises swimming in a river. Pools are tame. Beautiful spot.

The Mississippi is notorious, like the Loire. People drown every year because they misjudge the river.