On one of our little trips in the country (this time with Niall and Antoinette) we visited a little chapel at Plaincourault, south of Angles sur Anglin. On the way back we stopped near Merigny to look at a weird thing.

Part of the Anglin river disappears underground south of Merigny, and rejoins north of the village. I'm not sure where exactly it leaves the main body of the river (and I am not sure anybody else is, either). 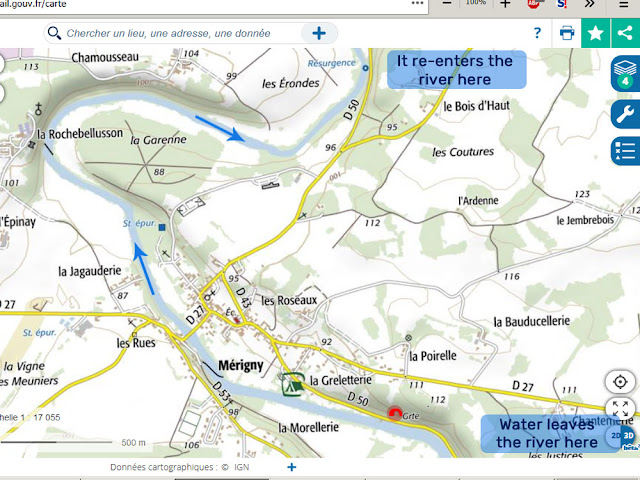 It was always thought that the water entering the river was a spring, but coloured dye testing proves that at least part of the water  comes from the river upstream. The underground river was discovered by a caving group investigating the grotte de la Roche Noire (marked in red on the above map) in 1967. The full course of the river hasn't been mapped, because the cave has collapsed in places. 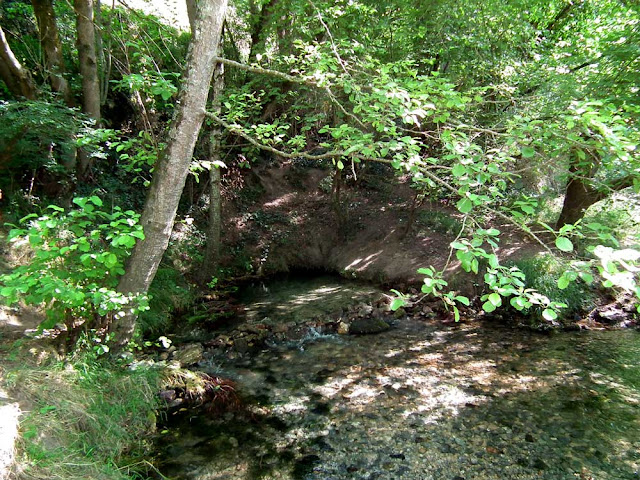 The spot where the water re-enters the river is far more obvious, and very picturesque. The water flows from under a small cliff into a pond, formed to stop the water eroding the far bank of the river. 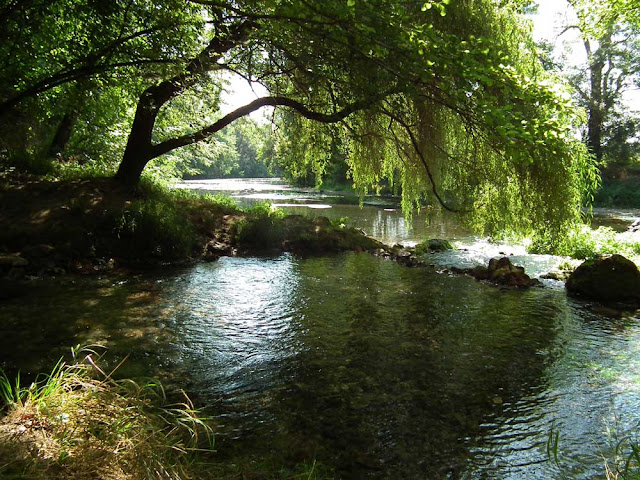 This same phenomenon occurs in north central Florida, near Gainesville. The Santa Fe River dives underground for about five miles before resurfacing on its way to the Gulf of Mexico. Another river in Florida disappears altogether and feeds to Florida Aquifer. Its cause: the soft limestone geology.

Yes, I've heard of other underground rivers further south in France, but seen them and never encountered one locally before.

The best known résurgence in France of an underground river is la fontaine de Vaucluse, but closer to home, le Loiret is a re-emerging portion of the Loire river. Its headwaters are in the Parc floral de la source du Loiret. If you have a chance, I highly recommend a visit, and especially La serre aux papillons where you can see live butterflies from all over the world. À ne pas manquer!

I did not know any of that!

I've experienced la fontaine de Vaucluse, on numerous occasions but have yet to experience this phenomena in other regions of France. Great snippets of information to file away. Thank you

We were quite surprised to encounter such a thing in our area.