The Plaza Theatre at 600 George Street Sydney was built in 1929 as a 2,000 seat cinema. Like many of the cinemas of the time it was over the top luxurious, and ludicrously ornate. The building is brick, which has been stuccoed, and the ornate decorations are precast concrete. The interiors were even more fancy: beamed and painted ceiling, spanish style windows and a balconied viewing gallery, all trying to evoke a Alhambra vibe. 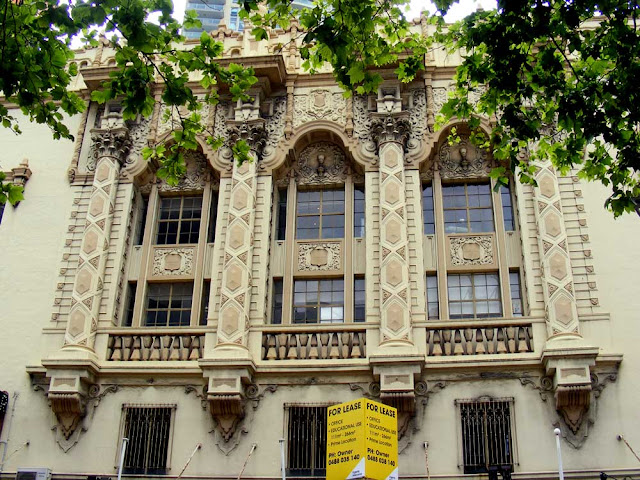 I don't think I ever went to the Plaza Theatre. The building still exists, but it closed as a theatre in 1977 and a McDonalds installed where the foyer was. This was actually a lucky break, because some of the interior survives in the fast food restaurant, whereas the theatre itself was gutted to make a ice skating rink. It has now been turned into offices.

We took this photo in December 2017, when everything in George Street was behind barriers and screens because the road was being dug up to install a new tram system. Hence no view of the ground floor.  Like many cities, the trams in Sydney were done away with in the early 60's and now city life is being made unbearable by the reinstallation of something that should never have been removed. Sydney's new tram system open to the public in 2020.

There is more on the cinema here.
Posted by Simon at 09:00

So will it once again be possible in real life to "shoot through like a Bondi tram"?

kind of, but all the trams are heading west from Central (which itself sounds like it should be a saying)