We stopped at Genoa on our way up to my "Uncle" Rick's house in southern NSW. It was too soon to call into the pub as we had only just had breakfast (and I assumed - wrongly - that the pub was no longer). We were looking for the public toilets which were clean and in good condition, and the other side of the old road bridge, which is now part of a pedestrian route. Luckily the highway was re-routed before the Genoa Bridge fell down. (I am sure we blogged about the bridge - but I can't find it. One day...)

Being a proper pedestrian route there are information boards, and the one for the pub reads "The building was originally a two storey pise (rammed earth walled) structure. Unfortunately fire destroyed the top storey in 1933. Genoa's first liquor license circa 1897 was held at the Maramingo Hotel (across the river) this was transferred to Alexander's boarding house (Bass Street) circa 1913 until it was finally transferred to the Genoa Hotel." 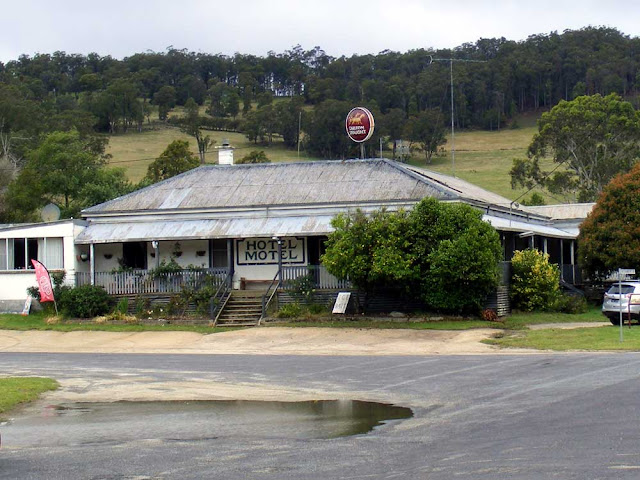 This is the kind of pub I used to seek out when I was a young bloke and often travelling. The food was generally nothing spectacular, the beers were industrial, but if you wanted to know what was going on they were the place to be. It's also the kind of pub I spent many year in, playing music.

They're a dying breed, unfortunately, replaced by lookalike chain places, ginormo "clubs", and try too hard coffee shops.
Posted by Simon at 09:00