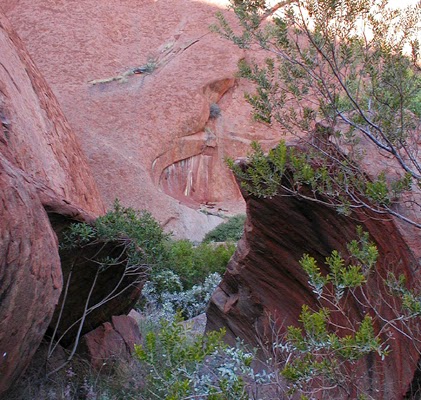 The action of grains of sand blown in the wind has formed these sweeping sculptural shapes at the base of Uluru.

*****************************************
Orchard News: I am delighted to report that the Pyramidal Orchids Anacamptis pyramidalis have doubled their numbers to 5 plants this year, in 4 spots in the orchard, quite spread out. My botany club friend Jean reckons that Pyramidals are increasing their range and distribution in France due to their propensity for turning up on autoroute embankments. The turbulence from vehicles is carrying them ever further, and he thinks the nearly microscopic seeds sometimes travel 20 - 50 kilometres in this fashion before landing and starting a new colony.

As I suspected would happen, we have lost all the crop from our Burlat sweet cherry -- they dropped from the tree or the birds ate them before they were ripe. I doubt we will fare much better with the others as they ripen (Burlat is always the earliest). The sour cherries will make up for it to some extent though.

I've picked this year's supply of grape leaves for dolmades and have pickled them in brine ready to use.

The white Ebenezer onions are starting to go to seed and the garlic is nearly ready to pull. The potatoes are thriving, looking most lush. Some critter has been eating the aubergine leaves -- I would suspect Colorado beetle, but the potatoes haven't been touched (however, Edouard told me ages ago that the doryphore has gourmet tastes, and will always go for aubergine in preference to potatoes -- they are the same family). Slugs or snails have eaten the melon seedlings, but the cornichon and zucchini don't appear to be to their taste.
Posted by Susan at 09:00

"doubled their numbers to 5 plants"....
Two and one half plants last year... or three, but one 'blind'?
Our ONE...
(blows raspberry at screen)....
is just coming out....
no Greater Butterfly...
didn't like Stonechat ess-aitch-one-tee down its throat, methinks...
and only one of the Bees is going to flower, the other is going back to bed.
On the other hand, we have over seventy Lizard orchids in the garden and verger.
Some of them absolutely huge...
I think the rain/damp has helped...
what think thou?

Yay! Good to hear our labours are bearing some fruit, or is that vegetable :-)