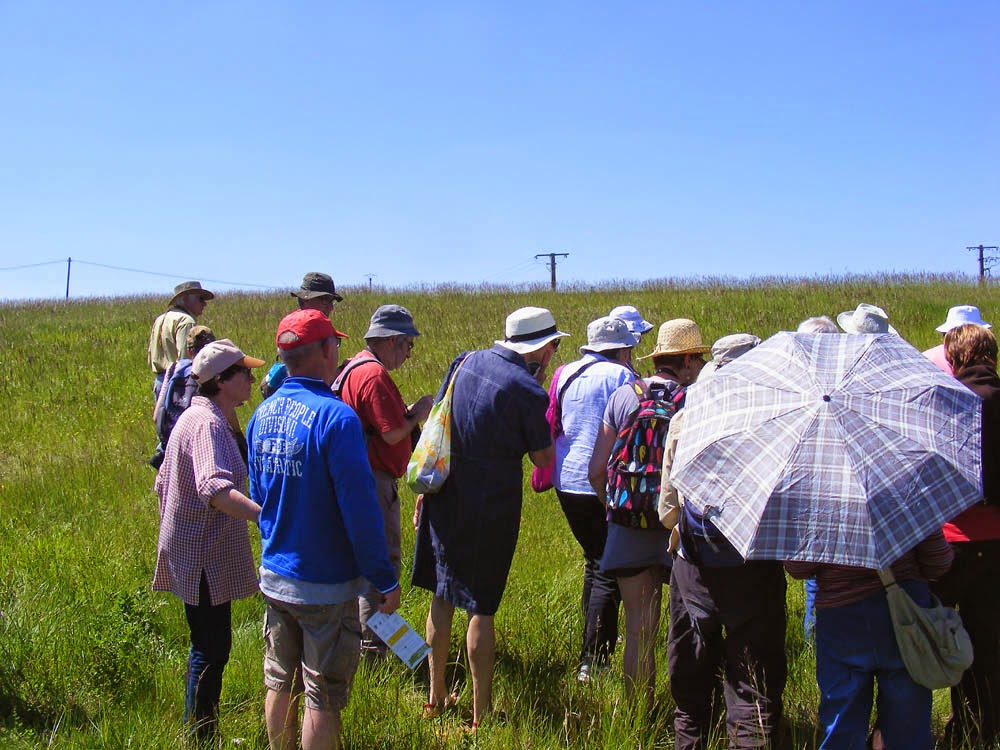 
On Sunday 18 May the Association de Botanique et de Mycologie de Sainte Maure de Touraine met for an outing at the Pelouses des Grandes Fontaines near Bléré. The main objective was to see the limestone grassland orchids, but like all limestone grasslands, there are many other special plants there. 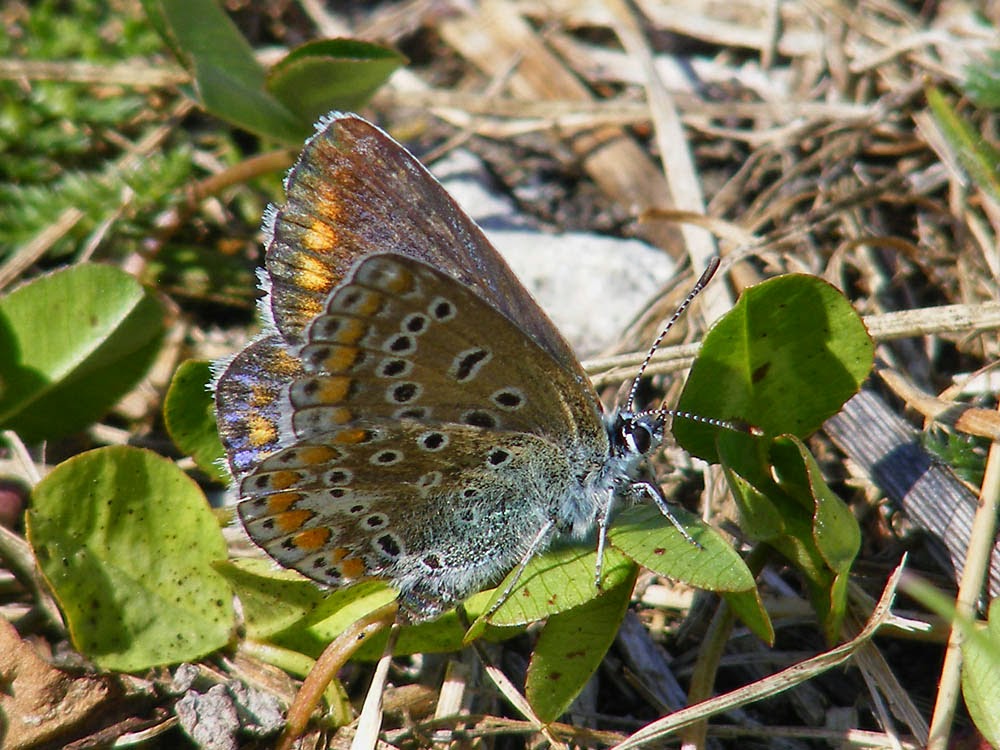 Adonis Blue butterflies Polyommatus bellargus were abundant on the site. This one is female.

It's quite a big site (70 ha), on two dry rolling slopes with a depression cutting through the middle that is much wetter due to the presence of springs. These springs, which feed a small stream called the Herpenty, also supply the town of Bléré with its water, thus the site is protected by the local authority to maintain the high quality of the water. As a nature reserve the site is not fertilized and it is forbidden to dump any sort of waste there.  The plants and soil bacteria on the site help purify the water that falls as rain into the system, by filtering out for their own use such pollutants as nitrates, phosphates and organic material. 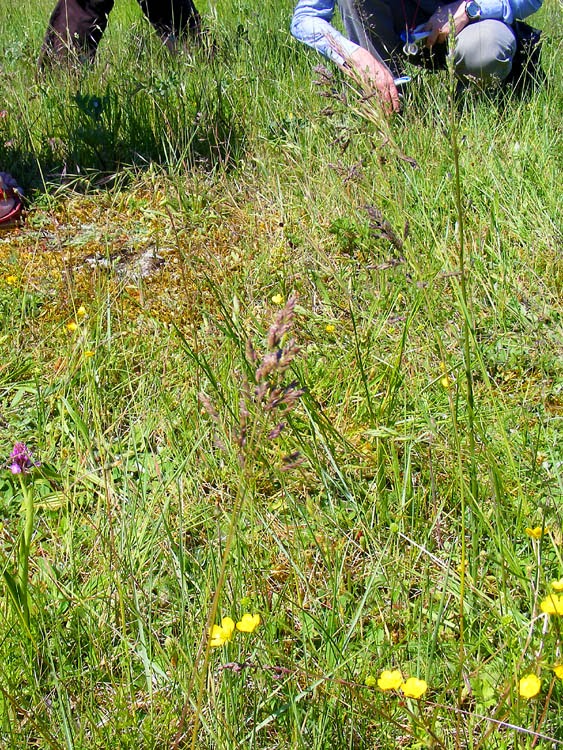 This abundance of plantlife is growing in soil only a few centimetres deep. The underlying limestone breaks through in patches (eg on the left) allowing you to see just how thin the soil is.

These dry grasslands weren't always in such good condition. They have undergone a period of carefully managed natural regeneration. They will always have to be managed if the grassland is to remain. The natural succession is for bushes and scrub to take over. As a consequence the site is mowed and grazed (by sheep and horses) as appropriate, and the invasion of scrub is kept to a minimum. Thus the grassland offers a sanctuary to many species that are threatened or have disappeared from other places. It is rather similar habitat to the Puys du Chinonais that the club visited two years ago. 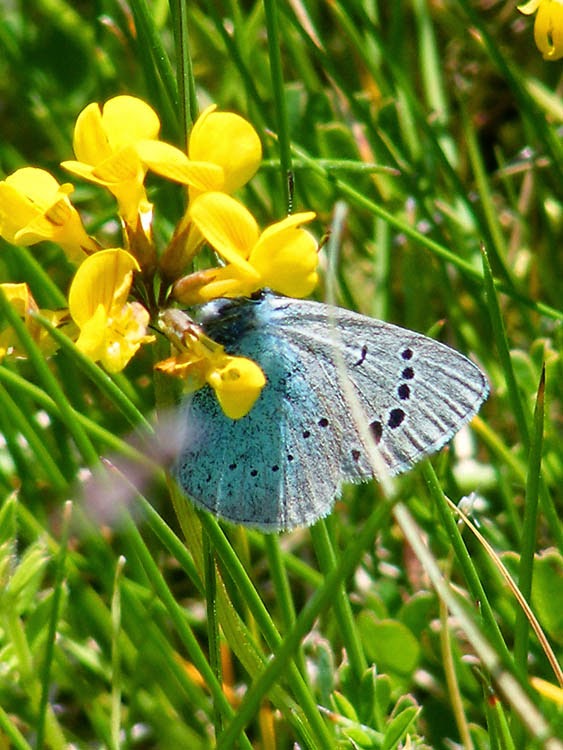 A Green-underside Blue butterfly Glaucopsyche alexis -- an exciting new species for me and a chalk grassland specialist like the Adonis Blues.

Brome grass dominates the dry limestone grassland which was once used as pasture, before the days of intensive arable farming in the area. On one side of the site there are hundreds of Pyramidal Orchids Anacamptis pyramidalis. My friend Jean, a formidable botanist, commented to me that this protected species, which is a species more commonly encountered in the south, is extending its range and increasing in abundance because it favours dry slopes such as motorway embankments. Orchid seed is so light the turbulence created by passing vehicles can carry seeds as far as 50 km to establish new colonies. 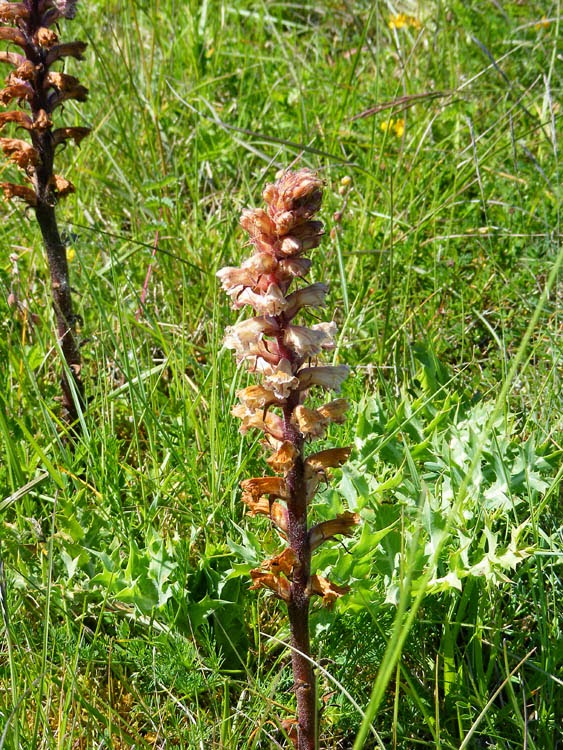 Amethyst Broomrape Orobanche amethystea, a parasite of Field Eryngo Eryngium campestre, seen here clearly associated with its host. This was another exciting first for me. Broomrapes are notoriously tricky to tell apart and this one could easily be confused with Common Broomrape O. minor.

One of the other members of the club told me a great story, nothing to do with the site. He lives next door to the pharmacy in his town and in France people are encouraged to take fungi to the pharmacist to be identified and pronounced safe to eat. Paul, my friend, happens to be a fungi expert, so the pharmacist often calls him in to confirm an identification. He says that its got to the stage where locals are not just bringing in fungi, but all sorts of natural history for identification. The other day he was called in to identify a mating pair of Great Peacock moths Saturnia pyri. He doesn't mind -- he's retired, he is pleased people are interested enough to ask, and he got some great photos. 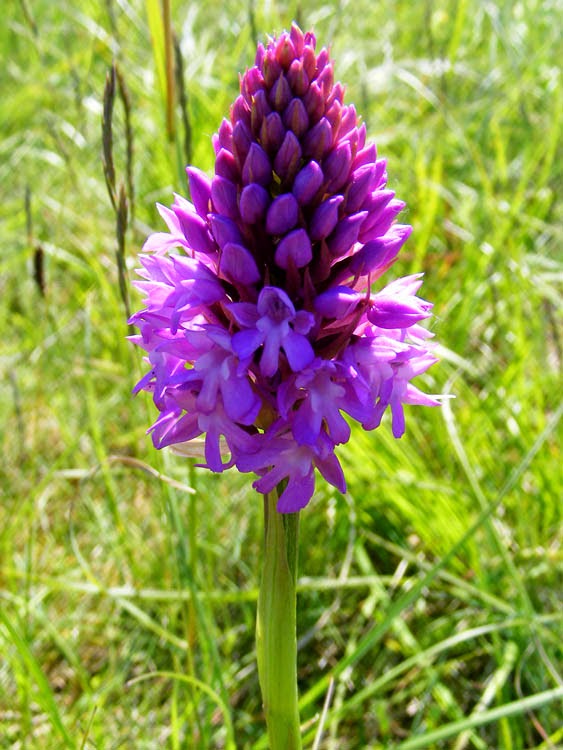 French Expression: Oui s'il vous/te plaît = yes please. This is the expression to use if you want seconds of dessert or more to drink. Saying 'oui merci' will likely get you passed over as 'yes thank you' doesn't exist in French, having been interpreted as meaning 'thank you, I've had sufficient'.
Posted by Susan at 09:00

Lovely Pyramid pic...
ours has just got to the top bit of the picture stage...
and one of the Bees IS putting out a flower spike!!
But they are both in quite shady positions...
It is interesting about the dry requirement of the Pyramid....
ours specimen is in the plough-gully at the side of the field and it always seems quite damp around there....
it has grown very tall and lush...?

We came across dozens of those lovely purple orchids this week on one of Lulu's favourite walks.
The terrain was an area of grass on reclaimed industrial land developed into a country park and cycling trails.
I don't think I have ever seen them before in Derbyshire and they were incredibly striking.

Your first picture with title has made my day!!! Ab Fab... I love grasses but that just looks a patch of green C

As far as French expressions are concerned I don't think oui, merci [yes, please] is the same as non, merci [no, thank you]. If you just say merci, then you might be passed over.

chm: my personal experience is that French people are confused by a oui merci response. They don't know whether you are saying yes or no. Merci on it's own will definitely be interpreted as meaning 'no thanks', whereas in English just saying 'thanks' would mean 'yes please'.

Tim: several of my Pyramidals are growing in the shade, but not really in the damp. I think they like well drained.

According to my slightly mad teacher, ahem years ago, "merci if you're offered something definitely means "no thanks". However some people have got used to foreigners who mean "yes please"! P

Hi Susan,
I do agree with you, a stand alone Merci almost always means No, thank you. On the other hand, I can say, as a "former" French native, that Oui, merci always means Yes, please. I have never heard of an occurrence where Oui means No.

In my own experience, oui, merci is perfectly idiomatic and clear in French. You state categorically that it doesn't exist, but that's not right.

For the benefit of your readers who are learning French, you might want to say that one way to avoid confusion is to be very clear though polite about what they want in such social situations. A a softly spoken or hesitant oui, merci or just merci can cause doubt and miscomprehension. In fact, a simple merci as a response to an offer of food or drink is slightly ambiguous; the French answer to that might be merci oui ou merci non? You're right, though, about a definite, clear merci usually meaning "no thanks".

How to be clear? Say something like oui, volontiers meaning "yes please" or avec plaisir, and say it clearly and enthusiastically. Body language and facial expressions also help get the meaning across, whether you mean oui, merci or non, merci.