The Abbey church at Saint-Savin-sur-Gartempe is world renowned for the quality and quantity of it's frescoes. The building was World Heritage Listed in 1983 because of the paintings. Because of this the church has a huge car park (well - it's really the market square) and a visitors centre.

Something I suspect that isn't seen so often is this view of the oldest part of the church, taken from the river. The original building is the cruciform piece under the tower in the centre of the picture, which was started in the 11th Century. The little chapels you can see were added slightly later. 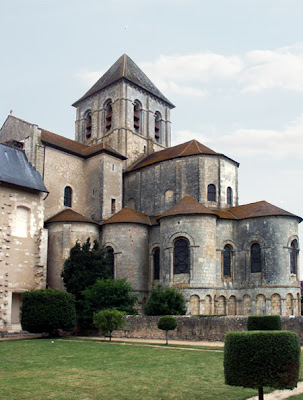 The huge tower that is usually the feature shown on postcards wasn't built until the 14th century, after the addition (in a couple of instalments) of the long nave.

A full description of the frescoes (in French) are here