The market town of Richelieu is about an hour away from Preuilly sur Claise. It is a planned town designed for Cardinal Richelieu by Jacques Lemercier.
One of the Gates of Richelieu 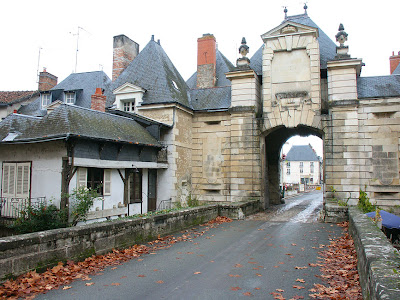 Cardinal Richelieu bought the village of his ancestors (nice to have money.....) then obtained the authorization to build "a closed wall borough and ditches and to build a market" from Louis XIII. Approval was also given to hold four annual fairs and two markets per week. The town was built between 1631 and 1642, then building stopped, mainly due to the Cardinal's death.

The design is Hippodamian (look it up!) and laid out on a symmetrical grid of 500 x 700 metres. The plan is centred around 2 squares: la Place Royale, and la Place du Cardinal on which is the town hall and a covered market. It is surrounded by walls (made up out of the back walls of the outer ring of houses) and and a moat (now mainly grassed over). There are three monumental gates, with a fourth, ornamental gate, built to maintain symmetry. The rules for building in Richelieu were very strict - the purchasers of land had to commit to building there within 2 two years, and the house had to be built according to plans held at the clerk's office. Furthermore, anyone building had a choice between only 2 builders who were authorised to carry out building work. A register still exists which shows the list of the owners and all the works involved in building the town (and presumably which of the builders they chose).

Place du Cardinal
We have been there twice, and it is still being resurfaced

On the main street there are still 28 of the identical hotels (mansions) built under the plan and these are the grandest of houses, presumably for the grandest of people. One is open for visits, so one day we will have to do that. On the streets behind them there are smaller houses on smaller plots of land, also built to the masterplan. Further out against the town walls are the workshops, factories and some of the less salubrious businesses such as butcheries, but even these are to the plan.

The original market hall still exists, and is a huge oak and sycamore building which has been well maintained, but never really imporoved or renovated. This gives a real idea of the effort that went in to making Richelieu the most modern and comfortable of towns.
The Market Hall 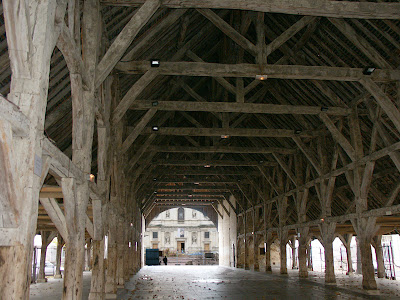 Like many planned towns (even today) it was anticipated that they would have problems attracting residents and businesses, so the cardinal exempted the town from tax.

Outside the walls, the Cardinal built his palace, which was intended to be the largest in France. Most of the stone came from the Chateau at Saumur (which is why large parts of the ramparts of Saumur are being rebuilt, one assumes). The chateau no longer exists, but the gardens are still there, and you can hire bikes to ride them, or boats to explore the ornamental waterways.

My parents in the Cardinal's gardens. 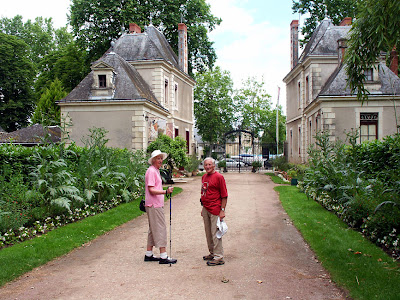 A arial photo of Richelieu can be seen here.

Email ThisBlogThis!Share to TwitterShare to FacebookShare to Pinterest
Labels: Churches, Pictures of Chateaux, Richelieu, Towns and Villages near Preuilly

Good news from Preuilly! The boulangerie at the bottom of the main street opened again this morning and the cakes look as good as ever!

We showed your website to French friends who were delighted to read such an interesting site about Preuilly. He said that he remembered playing in your granary as a boy - he knew the son of the owner.

That is super news all around. Glad your friend enjoyed the site - We do try to make it interesting for the locals as well us "furrners"

Have a look at my blog on Richelieu. The square has been completed now and is very impressive although some say it is an offence against Art.
http://leblogdeleminencerouge.blogspot.com

Thanks for your reaction. I so much like the word Hippodamian so much that i really did Wiki it and have posted the WikiText on the Richelieu town blog. Thanks!