We wrote a couple of weeks ago about the walk we did on the day before my birthday. I thought some detail might be in order, in case any hardy souls wanted to do it for themselves.


You start off in the village of Cauterets, and catch the telecabine (cable car) and telesiege (ski lift) as far as it can go. The tickets are 15€ per person, and there are no single tickets. The telecabine is a 15 minute journey, which takes you from 930 metres to 1850 metres, then the telesiege is a further 25 minutes uphill to 2303 metres. I made a movie - quite a long one, as it turns out - only spoiled by the scratches on the perspex of the telecabine, I assume caused by skis during winters.

We decided that we would catch transport up the hill and walk down, mainly because I struggle with my breathing walking uphill at altitude, and despite the fact that everyone says that coming downhill is harder. It's obvious that people who say such things don't have lungs damaged by asthma and a couple of bouts of bronchitis. It also meant that we didn't have a deadline to get to the top of the hill before the cable car service stopped.

Susan isn't a huge fan of getting on and off ski-lifts, but we both enjoyed floating above the ground in silence with nothing between us and the great outdoors.

I hope that gives you an idea of how rugged the area is, and this will show you how steep some of the slopes are. Maximum slope dowhill was almost 50%, with an average of 12.8% for the whole walk.

The refuge d’Ilhéou does a nice lunch. It's very light,a well cooked omlette served with a tomato salad for 7€, drinks by the can are 3€, but they don't have the wherewithal to accept any form of electronic or card payment - cash only and he may not have change. There are toilets, and a tap to refill your water bottles. 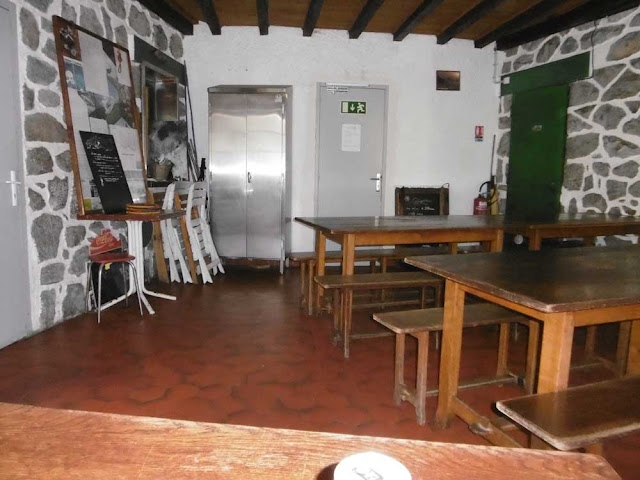 Carry plenty of water. There are no refills to be had between the refuge d’Ilhéou and Cauterets. Most of the time you will be above the treeline, so the only shade to be had is from the occasional rockface. We didn't have as much water as we would have liked because I assumed we could fill up from various streams, but there was a lot of cattle on the upper reaches, which dampened our enthusiasm.

Although there is an official walking path (GR10) marked with yellow and red stripes, follow the track from the refuge d’Ilhéou to Cambasque. The GR10 takes a more direct route, but is steeper and rougher. The 49% section on the elevation profile was a real scramble down a cliff face on a very rough path. The following photo shows the part of the GR10 path we walked and you can see a Spanish couple we met who were really struggling on that section. After that, we stuck to the track rather than the path, because the path then struck out across a loose scree slope. We left the road at Cambasque to follow a walking track. This was rough, with large boulders, not pleasant, but better than sharing a narrow road with cars. 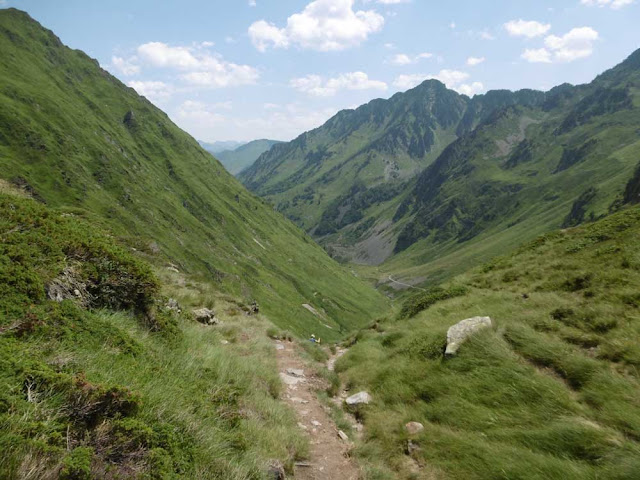 All in all, it was an adventure, and we are quietly proud of ourselves. Our only damage was calf muscles that took a couple of days to loosen to the point where we could walk properly, and a couple of scratches on my knee where I took a tumble on a tree root.

Between sailing through the sky and falling down the slopes, I think I might not have had as much fun as you did .....
bonnie in provence

This picture brings back so many memories from our days in Andorra. We 'walked' in the mountains every week with a group. I was informed at the beginning that unless it involves ropes and crampons it was a walk, not a hike. I was in no position to argue. We were walkers.