Pech Merle is one of a number of caves in different regions of France that have Prehistoric paintings. It was one of the first to be discovered and is one of the few where visitors get to see the real paintings. Its most famous painting is of a pair of spotted horses. The site is owned by the nearby village of Cabrerets.

The English word 'cave' translates as 'grotte' in French. The Pech Merle cave was discovered in 1923 by three adventurous children who crawled in, lighting their way with candles stolen from the local church.

To get there, drive to Cabrerets (not far from Cahors in the Lot Valley) then follow the distinctive signs up the hills to the cave site. There is an upper and lower parking area, already full by late morning when we visited and we were lucky to get a park. If you are fit and keen it is also possible to catch the bus to Conduché and walk along the trails through the hills above the river to the site. The walk is uphill all the way and takes at least an hour. 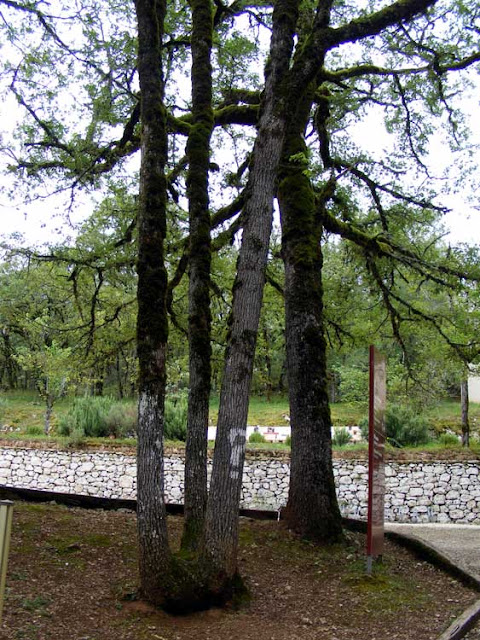 This 300 year old oak tree near the Pech Merle visitor centre survived a drought in the mid-20C. Speleologists realised that it must have its roots in moisture, which indicated another undiscovered cave beneath it. Now when you visit you get to see its roots underground.

Visits are by guided tour only, limited numbers, and last 45 minutes. Tickets must be bought in advance online. You are strictly instructed not to take any photographs, even without flash, and not to touch anything (not just the paintings, but rock formations). There is a hefty fine for damaging anything. You are also instructed to put on a warm layer as the caves are 12C. 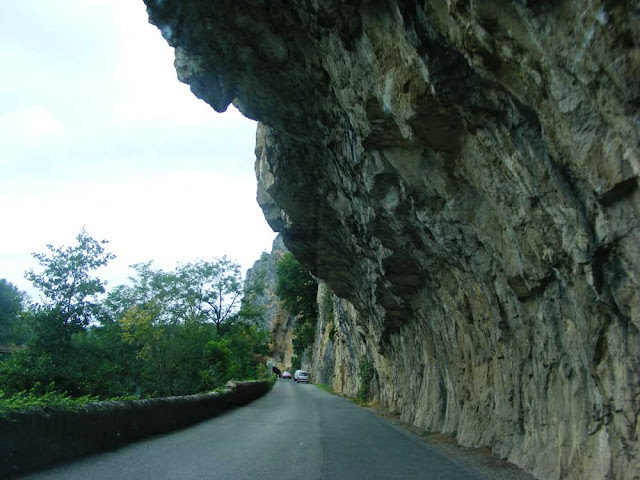 Make sure you arrive a good half hour before your tour is due to start, and you can go directly into the excellent small museum, or the meeting point for tours, bypassing reception. Tours are frequently booked out days in advance. One tour in English is offered daily, at 11:15 am. Tours are announced over loudspeakers about 10 minutes before they depart underground, which gives you time to get to the meeting point if you are in earshot.

Once underground you will see not just Prehistoric artworks, but geological formations and evidence of prehistoric animals who lived in the cave. The guide will describe how the caves and the paintings were created. 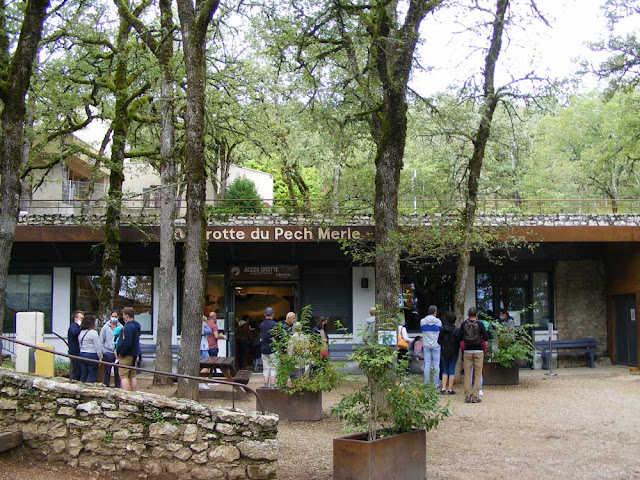 The artwork is awe inspiring, both in terms of draftsmanship and age, and it was a great privilege to experience it. I highly recommend a visit to these caves.

Where to eat afterwards: We had lunch at the Hotel Restaurant des Grottes du Pech Merle, in the village of Cabrerets, on their lovely spacious veranda overlooking the River Célé (passing canoeists got friendly heckling from diners). We didn't have a reservation, and were lucky to get a table. We chose the three course Formule du jour, 19€, which featured seasonal and local ingredients. The starter of a cold summer vegetable crumble, served with a green salad dressed with a slightly spicy vinaigrette and fruit and nut bread, was exceptional. I tried a sparkling wine I had never heard of before, from nearby Gaillac. It turned out to be very distinctive and drinkable, with very strong green apple notes (so much so that on my first sip I thought I had accidentally been given cider).

Some other Prehistoric painted caves in France:

Lascaux -- this is the most famous of these caves, in Dordogne. Don't do what we did and put 'Lascaux' in your GPS. You will end up in a small village an hour away from where the cave is and miss your tour. They are actually near a village called Montignac. Tickets can be booked online. One English language tour is offered per day, at 11:10 am. Visits are to a site called Lascaux IV, a faithful reproduction of the real thing.

Chauvet -- the most recently discovered cave, in Ardeche. The site you visit is the largest reproduction of a prehistoric painted cave in France. Contains a marvellous naturalistic frieze of lions hunting bison and rhinoceros. It is next on my list!

That's not terribly far from us, about the same distance as Lascaux which we've been to. I see a day trip in our future.

Des racines et des ailes has a beautiful film on the Chauvet Cave in French.