I have fallen badly behind with my blogging about my trip to South America 30 years ago.

After a couple of weeks in Chile we returned to Buenos Aires. This was imposed on us under the conditions of our round the world tickets, but also because we liked the place. We had a couple of days to do shopping and see sights. Avenue 9 Julio is 5 lanes of traffic each way, 2 bus lanes each way, and on either side of the main road, 3 lanes of side road. That's a 20 lane wide road in a city where machismo isn't unknown. Such japes....

There's not much to report on our second visit to Buenos Aires - much steak was eaten, plenty of shopping was done, and my diary has many comments on the heat (unbearable) and the price of restaurants, which was very bearable. 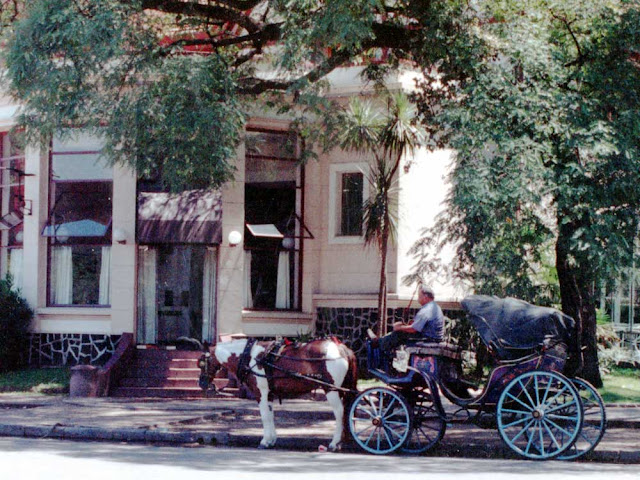 Of course, there was the night where we decided after dinner to go to a bar. It would have been at least midnight before dinner was finished, but I remember the bar not being particularly full. We ordered drinks, and when the drinks were delivered a man at the bar recognised our accents and said that he had spent time in Sydney. He joined us at our table along with his girlfriend. Or maybe two girlfriends. Things were quiet, and we had an early plane to catch, so after about an hour we got up to leave. It was at that point a bill for $50 was presented to us for the company of the ladies. There was no way we were getting out without paying, but by the same token we didn't have $50 on us. There were some rather large characters standing by, so it was agreed that Hugo would return to the hotel and get the money whilst I remained.

Hugo returned with $50, by which time the $50 had become $100, which of course we didn't have. So he went out to get the money while I remained. About ten minutes later he returned - with the nightstaff from the hotel. They came in at a pace, said "get up walk out now" - which is exactly what I did. It still cost $100, but at least I had escaped. The hotel staff were very angry about it all, I was shaken and Hugo was cross.

Interestingly, when Susan and I had dinner with Hugo at the end of 2017 we were talking about this event, and Susan was surprised at how consistant our stories were. I have a suspicion that she hadn't believed me when I told her about it...

You did have some adventures, Simon! As much fun as it is for us to read about your trip, I imagine you're enjoying this even more than we are.