It's mushroom foraging season again in the Loire Valley, so I thought I would refresh and repost something I wrote about picking and eating wild mushrooms from five years ago.


Mushrooms on the table after a fungi foray waiting to be identified.

A basket of boletes. 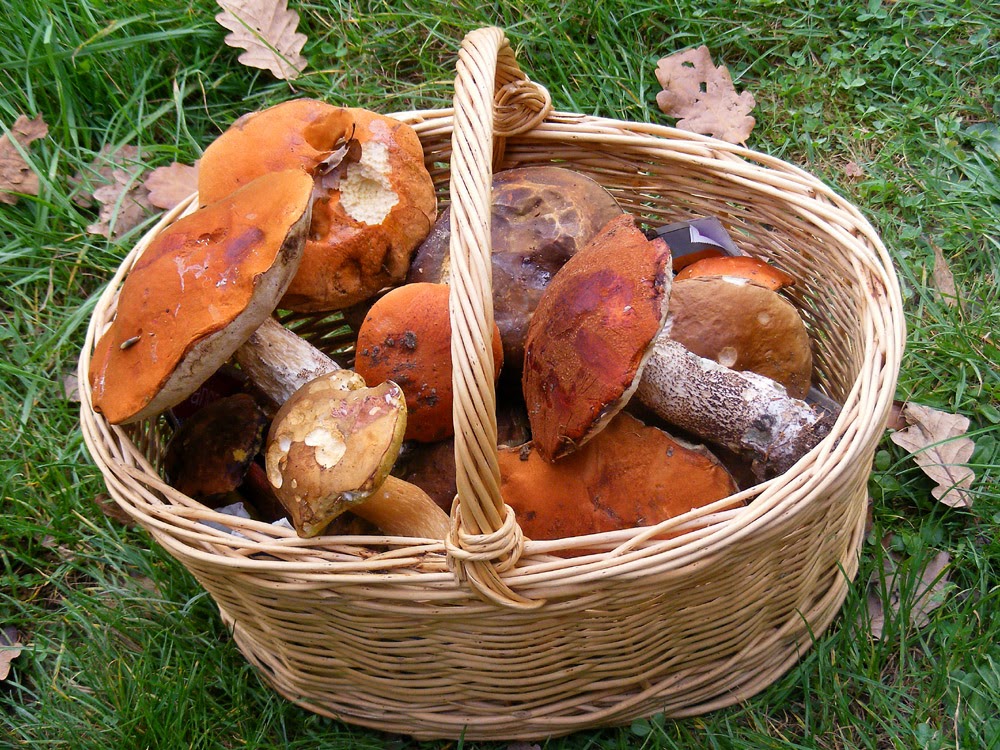 The mushrooms in the basket are all edible. They belong to a group called boletes, of which the ceps are the best known and most prized. They grow in forests. There several species in the basket, mostly Orange Oak Bolete Leccinum aurantiacum, but also a few Bay-brown Bolete Boletus badius and Red-footed Bolete Boletus luridiformus. The person who picked them was only collecting for the table and has not touched anything they did not know to be edible. Boletes are the best beginners mushrooms here because they are safe -- none are lethal and the couple that are dangerous are unappetising looking (coloured or staining luridly) and/or bitter to taste. It's fairly difficult to poison yourself with a bolete. Boletes are distinctive and easy to recognise too. They are fat stemmed, nubuck capped, with thick spongey pores, not gills, underneath.


If you are picking mushrooms in the forest, make sure you do it by gently extracting the entire mushroom, root and all. This leaves the mycelia undisturbed and able to produce more fruiting bodies like the mushroom you have just picked. Don't use a rake to gather mushrooms as this will totally destroy the mycelia, and don't pick mushrooms by cutting through the stem with a knife. That leaves a wound which is vulnerable to bacterial attack, which will also kill the mycelia. Don't gather mushrooms from the side of the road or industrial sites either as they are known bio-accumulators, taking up heavy metals and radio-active substances.


The quantity here is obviously more than a nice omelette's worth, but never fear -- they freeze and dry well. To prepare them brush off all the dirt and bits of forest floor. Cut the bottom off the stem, then cut the mushroom in half. This allows you to assess how much fly larval activity there is inside. If you are lucky there will be none. In bad cases you may want to discard the mushroom. Otherwise, simply cut out the affected sections. You may also wish to peel off the spongey pores as they hold a lot of water and can interfere with cooking the mushroom. Slice the mushroom, including as much of the stem as you wish.


Boletes I picked in the Forest of Preuilly.
We ate them. 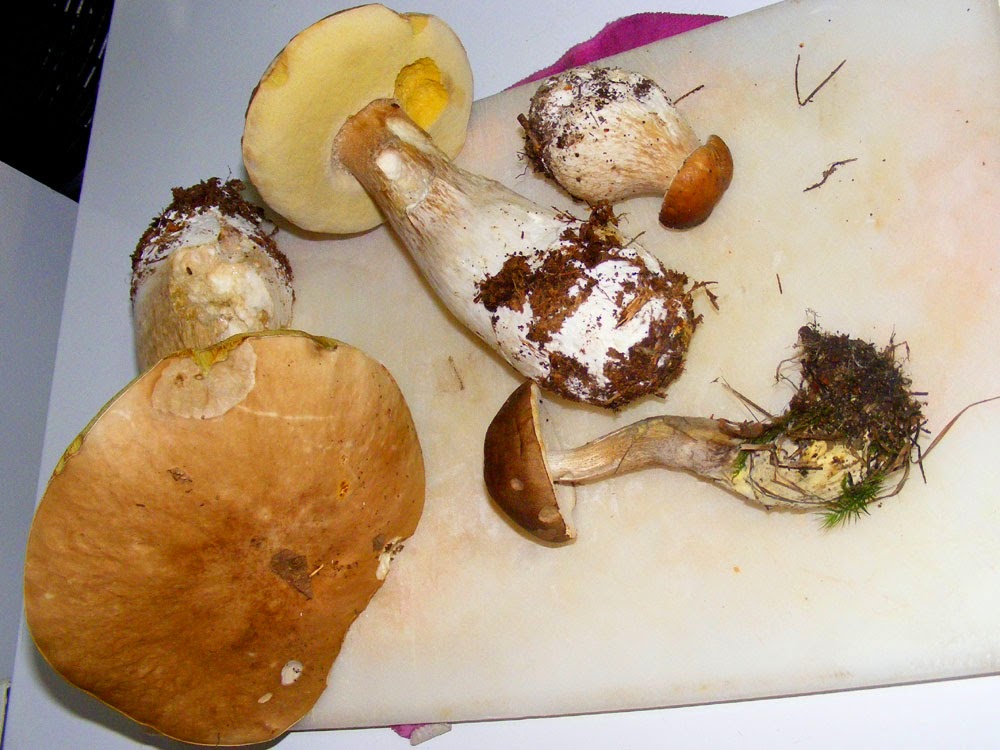 To freeze them my friend Paul advises preparing as above, then chopping the mushroom up. Spread out on paper towel and leave overnight, then freeze. Cook from frozen.


To dry them, slice them and lay on an oven rack at a low temperature overnight, perhaps with the door propped open slightly. Some species will go black, which makes them unappetising looking, but does not affect their flavour. Make sure they are completely dry or they will not store well.


To fry them from fresh Paul says that best practice is to cook them until they release their water, then drain the liquid before continuing to cook the mushrooms.


Boletes waiting to be identified after an outing in the Forest of Loches. 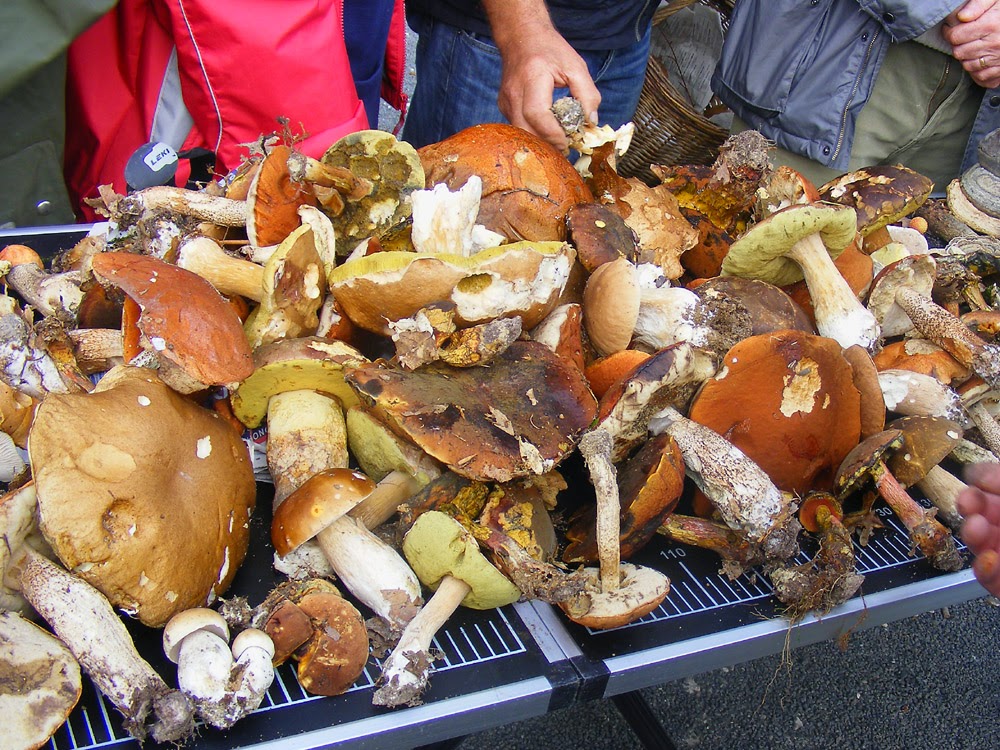 All of the mushrooms in the photo above are boletes too, but they have not been collected with the same aim in mind as the ones in the basket. These have been collected along with every other species of mushroom we could find in the forest. They've shared baskets with deadly poisonous species and with halucinogenic species. No one will be eating these mushrooms. They have been assembled simply to provide a learning opportunity. They will all be expertly identified and learners can discuss them and practice their identification skills in the presence of expert mentors. Then they are thrown away -- to prevent the possibility of an accident where pieces of toxic mushrooms get mixed in with the boletes someone eats.

Interesting post. We always ask at the pharmacy as we do not trust what we see!!
Hope all is well. Keep safe Diane

You are lucky if you have a pharmacist who really knows mushrooms. Most places don't these days.