Betz-le-Chateau was part of the territory controlled by the Lords of Loches and Reignac. François I overnighted here in 1517. The original castle was probably built by Gilles de Betz, the first known seigneur, who died in 1037, or possibly Raoul de Betz, who the records show was present in 1258 and 1272. The castle overlooked a ford on the Brignon and guarded a mill. From this period there only remains the square tower and the underground refuge, parts of which are 10th century.

It was likely to have been Pierre de Betz and Catherine de la Jaille, Seigneurs of Betz from 1463 to 1501 who enlarged the castle. The underground refuge was augmented to include an extremely unusual subterranean dovecote and living rooms for the human occupants that they could escape to in times of trouble. Above ground was constructed an extended keep, with square lodgings, a round tower which housed a painted chapel, a polygonal staircase tower and a western section that seems to have been destroyed in the 19th century. There was a protected courtyard fortified with a round tower and moats on the northern and eastern sides. In the 17th century a grand classical entrance gateway was added across the driveway and a walled garden created (now ruined). The construction of the D93 road meant that parts of the courtyard and ditches were destroyed.

The de Betz's family continued in ownership until 1503, when Renée de Betz married François Couhé de Lusignan, and he became Seigneur of Betz. The Lusignan's owned the land up until the beginning of the 18th century. The castle then passed into the hands of the Chaspoux family and became part of their holdings at Verneuil, Saint-Flovier and Chaumussay. 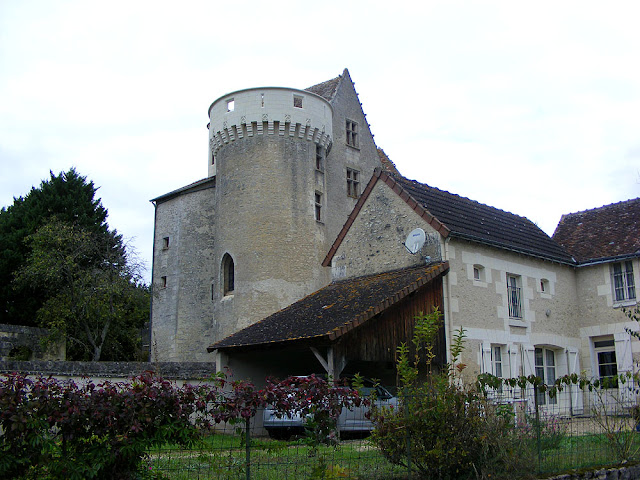 It was renovated in the 1960s and 70s, and is now halfway through another very thorough and impressive renovation, undertaken by the castle's Belgian owners. The current phase, the second of three, includes the restoration of the enclosure and the roof, as well as the complete reconstruction of the parapet on the round tower, based on vestiges still in place. In addition the underground parts will be made more comfortable and access to them improved so that public visits are easier to manage. 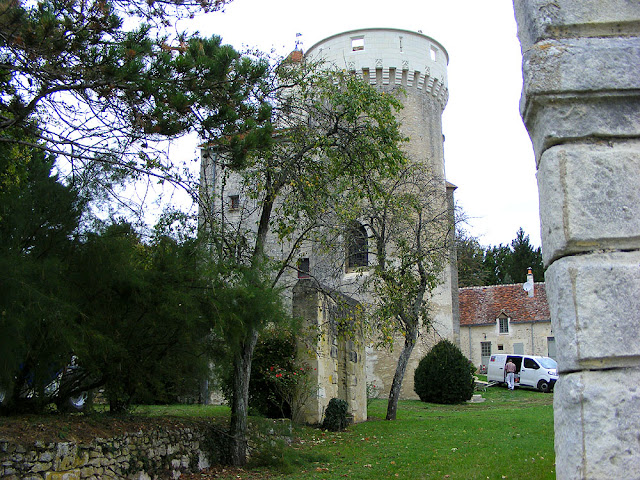 The project is being managed by heritage architects Atelier 27, based in Chinon. The roofing, joinery and painting are all being done by small local firms, all of whom I know (in fact, we've had quotes from the joiner to do our windows).

What about the original chateau up behind the church.... just the motte is left now, but the outer shape is still visible... mainly shown by the Rue Gilles de Betz and Rue de la Motte.... When did that fall into disrepair?

I don't know. I have a vague idea there was never a castle there -- maybe a wooden fortification on the motte. But I could be wrong.

Yes. it was a motte and bailey [wood] with a stone outer wall.... some of which still exists in places because houses were built against the wall.....
But that was all I could glean from a display at the church....

Susan, interesting that my comment on pronunciation of words ending in ETZ and your answer have disappeared!

They are on the previous post, about walking through Betz-le-Chateau in general. I thought of another place ending in 'etz' -- Veretz. I don't know how that is pronounced. I suspect 'veray'.