The Chateau de la Tour de Marmande is one of the most striking yet little known monuments in our area. It is in Poitou, right on the northern border with the Touraine and Anjou, with a tall thin tower that overlooks the landscape. The lords of Chatellerault, l'Ile Bouchard and Sainte Maure de Touraine faced one another off for centuries, near the strategic confluence of the Creuse and the Vienne. The name Marmande has a similar meaning to the English term 'marcher', meaning border lands. The history of the chateau's ownership is like reading a history of France -- the successive lords here were at all the battles that mattered and closely linked to the great events of French history. One died at Crécy, another at Agincourt. One fought pirates in the Mediterranean, another was right hand man to a sad mad king.

Finally, after its life as a defensive stronghold was finished, it was sold as a farm in 1830. The current owner, Véronique Kleiner, inherited it in 2014 and is descended from the man who purchased it 190 years ago. Everyone told her to get rid of it, but she decided to live in it. It is thanks to her that it is now listed as an Historic Monument but initial surveys revealed a building in a very parlous state.

She and her partner are science and history documentary makers, so they had good contacts to help research the chateau's history and archaeology. They also began to stabilise the structure and open every now and then to the public. They found that people were very eager to help, both physically with clearing the site of vegetation, and financially. Many people feel like it is 'their' chateau. 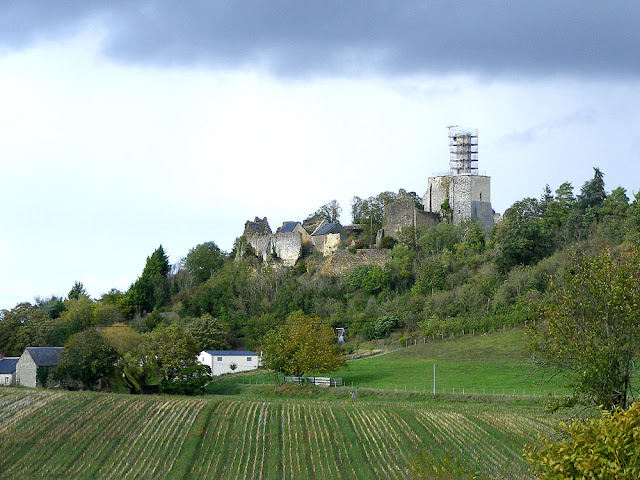 The oldest walls in the chateau complex date from 1000, when the feudal wars of the local barons meant that this area was regularly a battleground. Also dating from this period is a network of tunnels, with about 300 metres of underground galeries still extant. By the time these conflicts were resolved the Barons of Marmande were amongst the most powerful in France, holding high offices at court. Around 1300 the walls of the chateau were reinforced and in 1330, according to the dendrochronology, a 30 metre high watchtower was constructed. It is this tower which is still visible for many kilometres. 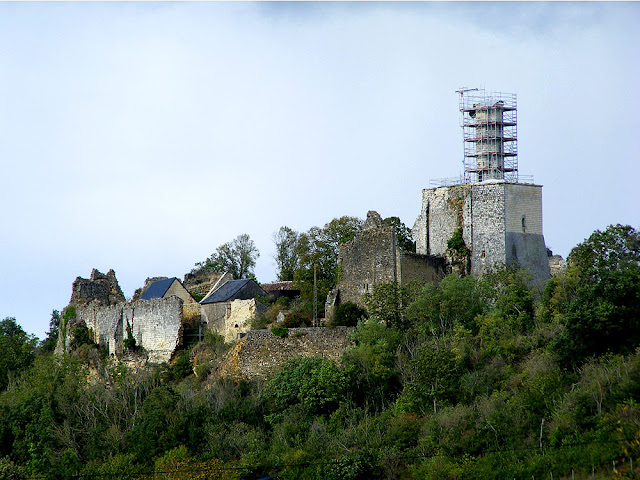 During the medieval period women inherited the chateau several times, and so by marriage the ownership was transferred to the lords of Sancerre, when Marguerite, Lady of Marmande, married Jean, Count of Sancerre, Chamberlain to King Charles VI, in 1357. This couple only had girls and in 1370 their oldest daughter Marguerite, Countess of Sancerre and Lady of Marmande, married Gérard V of Retz, companion in arms of the great Constable of France, du Guesclin. Gérard was almost immediately killed in battle and his widow, still only 16 years old, then married Béraud II, Dauphin d'Auvergne. Their daughter Marguerite brought the Chateau of Marmande with her as dowry when she married Jehan IV of Bueil. This marriage united l'Ile Bouchard and Marmande, and Jehan was Lord of Bueil, Montrésor and Courcelles, governor of Loches and Grand Master of the Crossbowmen of France. He fought alongside du Guesclin at Preuilly and La Roche Posay, and was killed in 1415 at Agincourt.

Their son, Jehan V of Bueil, was a companion of Joan of Arc and fought with her at Orléans, Beaugency and Meung, earning himself the nickname of 'the scourge of the English'. He was one of the companions of Charles VII when he went to be crowned at Reims, and reinforced the defenses of Marmande with large scale works. He died in his bed in 1477, at the age of eighty.

Eventually the family died out completely and the chateau was sold in 1730. It became nothing more than an easy source of building stone. The dwellings were dismantled, although the medieval defensive features like the watchtower, the curtain walls and the main keep were spared. Then it became a farm, and little by little its extraordinary past was forgotten.

Today it is hardly known outside its local area, but those of us familiar with the chateau recognise the historical value of the architectural remains and how they reflect the development of the fortress from the 11th century to the 16th. The very tall watchtower is one of only a few remaining examples of its kind, and the main keep has some fascinating grafitti depicting knights jousting on horseback.

Until four years ago there had never been any research or archaeology done on the site and much was shrouded in mystery. But now, with a team at work its history is revealing itself little by little. The chateau is built on a spur of friable stone, made even more structurally unsound by the extensive quarrying of underground galleries. Estimates of the cost of the work required come to 2 million euros, well beyond the means of the owner, even with a 40% grant from the Department of Arts and Culture. So they have approached D'Artagnans [link], a heritage charity which has organised a fundraising campaign for them. Their target was a modest €6000 (enough to do one metre of curtain wall), and they received more than twice that much in donations. They now have a 'Friends of la Tour de Marmande' type association which can help with fundraising and support. A programme of natural history and heritage events will take place when the building works and Covid19 allows.

Finally, they have been accepted as a project with the Mission Stéphane Bern [link], which means that work seems to be progressing apace, and the site is closed to the public for quite some time while the builders are in. You can keep up to date with their progress on their Facebook page [link].

We look forward to making a proper visit some time in the future.

I wonder about the etymology of Marmande. The term marche means border lands in French. For the town of Marmande down towards Bordeaux, Wikipedia gives a different etymology.

We saw the tower and went to explore it a good few years ago but it was all private and no entry. If I remember correctly there are some steep steps leading up from the road. It is a fine tower and as you say it can be seen for many miles away.

I got the etymology of the chateau's own website, but I'll check it out.

With the current owner I think there is a really interesting project going on and I'm going to pay a lot more attention now. The tower is really something -- you only have to see it to know it's something special.

Thank you Susan for this fascinating and well researched post. I can read between the lines your heritage background. Looking forward to more information and photos about this chateau.

Fabulous bit of local info...
I never knew that Proolie and Rich-posers were battle sites [or given their proximity, was it just one]... it looks fascinating and well worth a visit given what's been learnt about it.
I think that Jemma has been involved with LPO events there?

I will definitely be visiting again.

Du Guesclin took the castles of Preuilly and La Roche Posay in his campaign along the French/English border.

Just remembered another fact about that driveway... We took some cuttings from a nice flowering shrub growing there. Don't think they took though.