No longer officially known as a chateau, but two perimeter towers from the 15th century can be seen, as well as a grand 17th century gatehouse. The first written record of a chateau here, near Ingrandes in Vienne, is from 1425, when it was in the hands of the powerful Poitevin Aloigny family, close allies of a succession of kings and later given the territory around Le Blanc and the Chateau of Ingrandes in Indre.

The castle belonged to the Viscount of Châtellerault (presumably one of the many titles held by the Aloigny family). The first castle was built at the end of the 14th century. The building was rebuilt in the middle of the 18th century, on a larger plan, while preserving and using the general lines of the previous buildings. On the site of the medieval castle, stables, sheds and communal areas were built around a rectangular courtyard with a large entrance door. Next to it, a master door led to the completely new pavilion. During the Revolution, the building was sold as a national asset and only ruins remained, as much of it was used as architectural salvage to construct several houses in Châtellerault. Of this ensemble, only the two corner towers of the 15th century enclosure, which flank the buildings to the east, remain. They appear to date from the 15th century and mark the end of the old enclosure on this side. They are machicolated, with narrow arrow slits. These 15th century buildings were vast and formed a right angle with the north tower at the top. There also remains a half-ruined watchtower, the entrance door, the outbuildings and stables, transformed into farm buildings and huge "fruit cellars".

The Aloigny (or Allogny as it is sometimes spelled) family sold the chateau in 1662 so it was the new owner who rebuilt the place. During the 19th century it was owned by a farming family and transformed into a farmhouse and agricultural buildings. The current owners, who are extensively restoring the chateau, bought it in 1995. 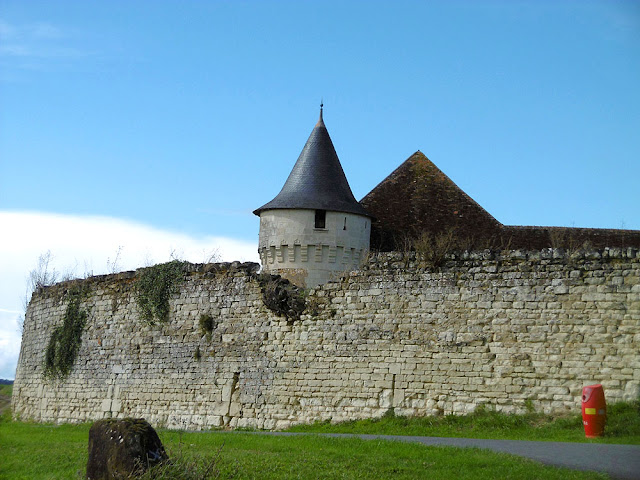