The Chateau of Ingrandes is in the town of the same name, near Le Blanc in Indre, to our south. We stopped to photograph it on Sunday when we were driving through the area. 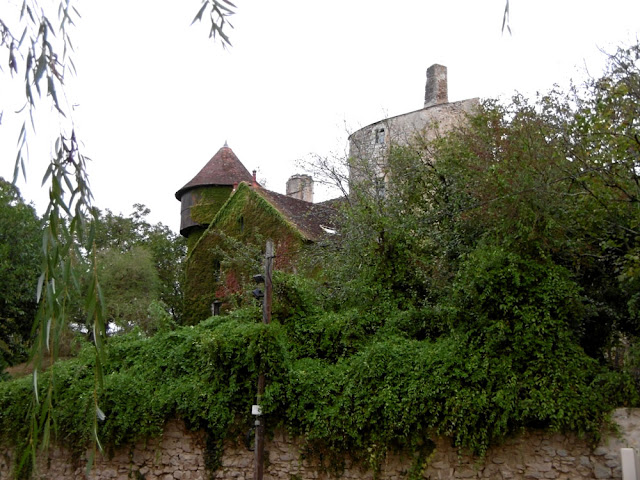 Protected by the River Anglin to the south and deep ditches to the north (now filled in), this feudal castle was begun in the 11th century, to replace a Roman defensive fort complex. The position overlooks and protects the Roman road between Poitiers and Bourges. It was part of Eleanor of Aquitaine's territory, and therefore under English control, until the great Constable of France, du Guesclin, captured it and other frontier castles along the Anglin Valley.

The castle was then rebuilt in the 14th and 15th centuries, and it is the vestiges of this castle that remain today. The structure of the tower with the hoarding (boarded top) has been dated to 1465. Henri IV, during his wars against the Catholic League, took the castle and gave it to his ally Antoine d'Aloigny, the Seigneur of Le Blanc. 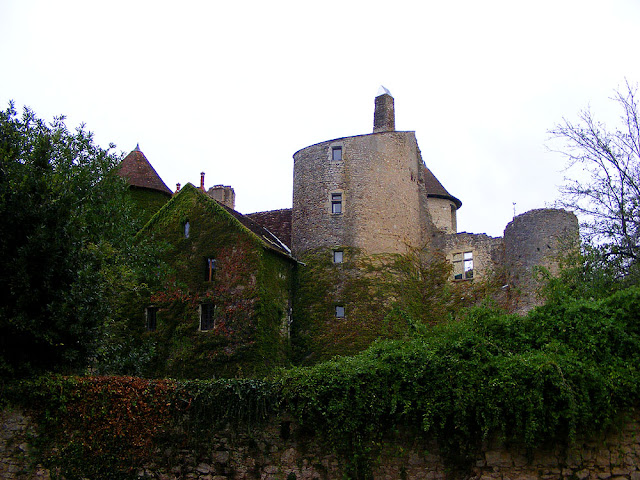 The pepperpot towers of the keep and enclosure were apparently truncated in accordance with royal decrees of 1626 ordering the destruction of the military apparatus at any French strongholds. Marie-Henriette d'Aloigny was exiled from the court of Versailles for being involved in intrigues and plots. She returned to live at the Château d'Ingrandes where she had the 17th century lodgings and the village church built in 1698. After it was put up for sale in 1734 following the financial collapse of its owner, the tax collector Claude Dupin, great-grandfather of the writer George Sand (real name Aurore Dupin), became, in 1739, the purchaser of all the castles of the Marquisat du Blanc (Roches, Forges, Ingrandes) as well as more famously the owner of Chenonceau. At some point, maybe at the end of the 18th century, the main building was demolished. The Chateau of Ingrandes remained in the Dupin family (Barons of Villeneuve) until the beginning of the 20th century. In 1923, it then became the property of the Combescure family who ran it as a farm until the 1970s.

Alain and Jacqueline Drouart acquired the ruins of the feudal castle of Ingrandes in 1982. They managed to get it declared an Historic Monument in 1987. Nowadays the 15th century dwelling with its beautiful fireplaces is completely restored, the keep is saved, a hoarding has been recreated on one of the towers, a new roof put on the staircase tower, and work continues.

What remains today is a part of the enclosure with its curtain walls and towers, the keep, a vaulted cellar and the old staircase tower, as well as the old part of the dwelling dating from the 15th century. The medieval dwelling is joined by a dwelling built in the 17th century and increased in height in the 19th century.

The chateau is open to the public, offers accommodation and hosts a number of special events. Ingrandes is one of the gateways to the Brenne Regional Nature Park, an important wetland that we live on the borders of.

UPDATE: Since this was published I have learnt that Alain Drouart died in 2008. His widow Jacqueline continues to manage the castle and is determined finish it so it is not a burden to their children, who will inherit it but, as she puts it, have their own lives and do not live at the chateau.

Email ThisBlogThis!Share to TwitterShare to FacebookShare to Pinterest
Labels: Pictures of Chateaux, the Brenne

I don't know. I couldn't find out anything about it.

Yes, by a pair of very determined and passionate individuals.