In early December we went to the Chateau of Candé to attend an event where the massive Skinner organ that resides there would be played. This is something that only happens a couple of times a year. The organ, along with modern plumbing, is one of the few major alterations undertaken by French American entrepreneur and music lover Charles Bedaux when he acquired the property in 1927 (he had shares in the Skinner organ company) .


The house manager introduces the chateau and the afternoon's activities. 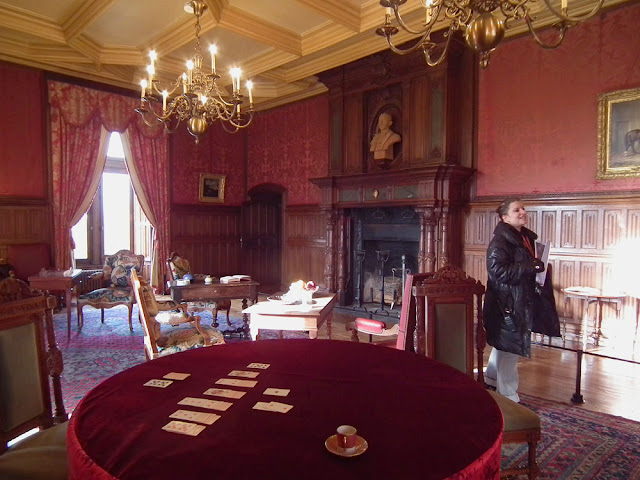 It wasn't really a recital, but more an information session about the organ. We were very impressed with how much the house manager knew, as she freely admitted she was no musician. We got to peer at the organ close up, squish into the control room and listen to various effects it can do. The organist was the musician who normally plays the organ in Tours Cathedral. At half time we were offered afternoon tea, and at the end we got to look around the chateau's other rooms.


The library set up for afternoon tea. 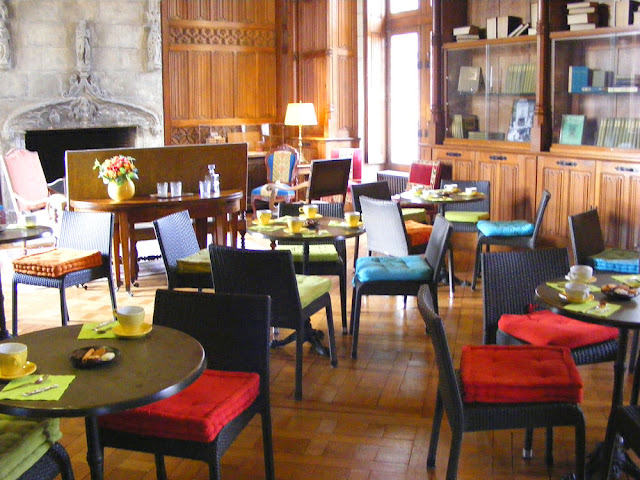 The organ, commissioned from Skinner and installed in 1928, has three keyboards, with the bottom one being capable of playing all of the 'instruments'. This is to simplify the playing so the organist does not necessarily have to know which keys play which instruments. The organ can also be programmed so certain combinations can be played simultaneously and has a selection of 27 instruments and three percussion instruments. The organist needs to play three separate pieces simultaneously ie two hands and feet. Curiously, the organ is positioned so that the organist faces the audience, unlike the usual arrangement, where they would sit with their back to the audience.


The organist from Tours cathedral playing. 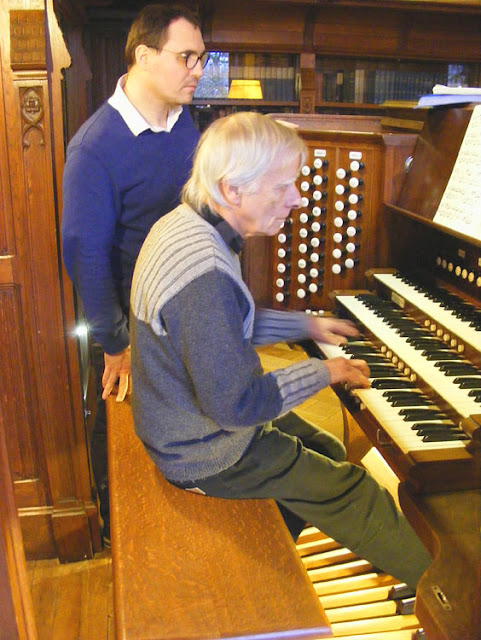 It took three men three months to assemble the organ, which is powered by electricity. Like everything in the house it is 'disguised' with carved oak panelling. As organs go, it is medium sized (the one in Notre-Dame de Paris has five keyboards and the biggest ever organ had seven). 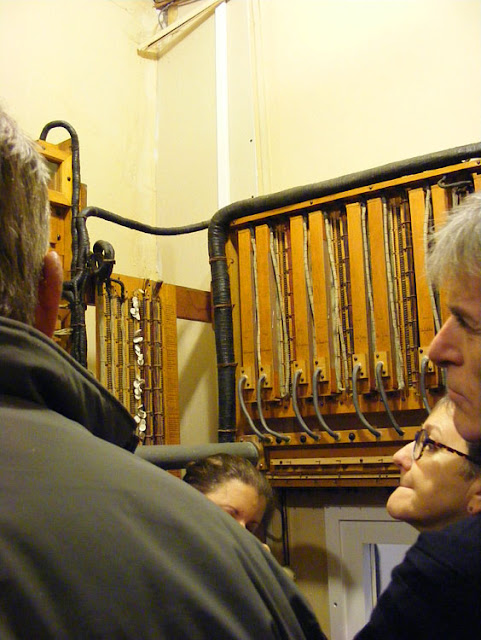 In theory the Skinner organ company could produce an organ a week, but this is an average based on the total number of Skinner workers and the number of organs produced annually. When the City of Tours took over the chateau it took ten years (2005 to 2015) for the organ restoration to be completed, what with there being long periods when the American specialist they needed to contribute to the project was unavailable. It has now been restored to fully working order, by a Breton organ making firm. It is the only working organ of its kind in Europe and one of only three working Skinner house organs in the world. It was classed as an historic monument in its own right in 1993. 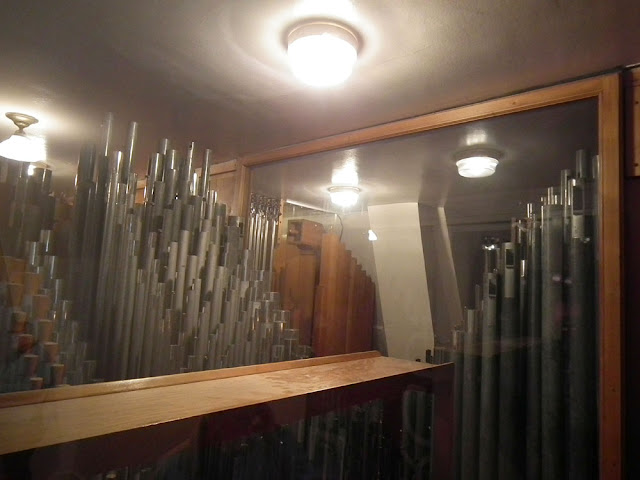 In the days of the Bedaux's occupancy they would invite the organist from Saint Sulpice in Paris down for the weekend to play. If he wasn't available the organ had the additional feature of being able to play automatically, using rolls. 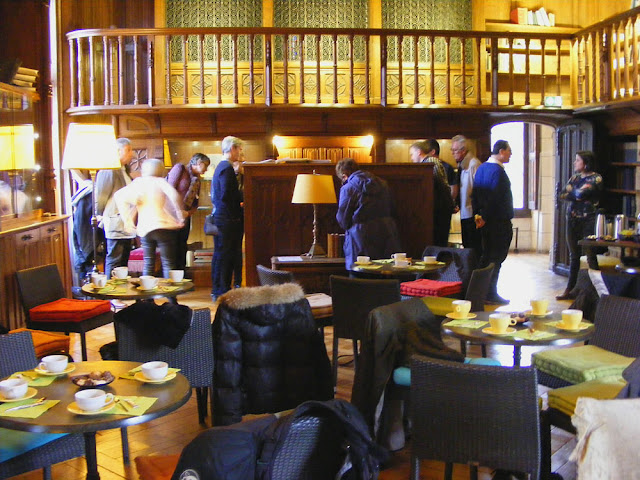 Setting the organ up to play was likened to a chef's mise en prep in the kitchen. All the 'ingredients' are laid out and the organist combines them. The organist has to remember he is not in a cathedral. Playing in a private home he is the accompanist for a singer performing chanson, folk songs or jazz. The technical term for this type of organ is house organ (Fr. orgue de salon). Organs are wind instruments, unlike pianos, which are string instruments.


The organist demonstrates a part of the organ pipes
(with a piece he has borrowed from the cathedral organ). 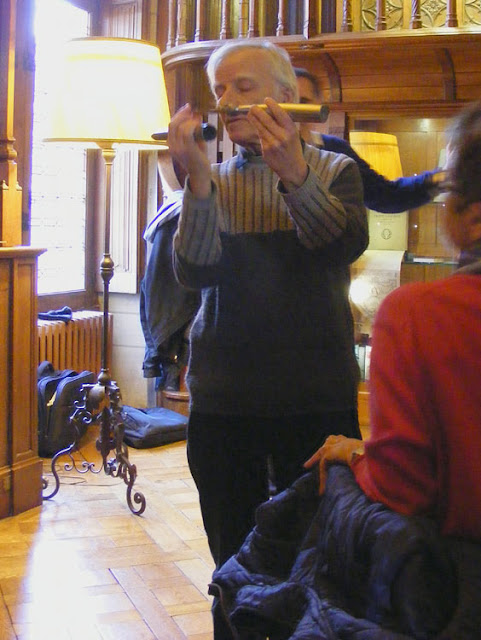 The organ was played during the marriage ceremony of the Duke and Duchess of Windsor (Edward VIII and Wallis Simpson) in 1937. Later, it was damaged when the explosives factory across the road blew up in 1943. Although repaired, after 1959 it was no longer used.


A sculpture in the grounds of the chateau, which clearly references the organ. According to a friend, you can speak in some pipes and have the sound appear from others -- hours of fun for small boys.

"It took three men three months to assemble the organ"
Oh how that has just had me giggling.... and has taken me back over forty years....
I had the dubious pleasure of going to what was then, and all boys boarding school.
The chapel organ was renewed whilst I was there... and it had to be done during the school Summer break... the team arrived during our last week of term... and hadn't finished when we arrived back.
In fact it took another fortnight before they were satisfied.
The first thing to take place in the chapel was the inauguration of said instrument.... to which various "high & mighties" were also invited... a "Whole School" event which included a very elderly Princess Alice, Countess of Athlone, our Royal Patron.
There was assorted speechifying, as would be expected... with the highest & mightiest sitting on comfortable seats in front of the altar, facing us.
Then it was the turn of Mr. Cox the Choir & music master and organist to give his introduction to the concert.... he opened with the words....
"It took six men nine weeks to erect my organ"
At which point the entire chapel errupted in giggles....
Myabiding mental picture was of both the Princess and our very staid Headmaster bouncing in their seats, hand covering mouth and shaking with mirth!
The Head stood up and calmed us down with hand movements.... at that point I don't think he could speak... or dared speak! As we all became quiet he said... "Please continue, Mr Cox" to our beetroot red music teacher... who cut his speech short and just told us the various bits he was going to play.
Never, in front of kids, open your mouth without thinking carefully about what you are about to utter!!
Thank you Susan... it has made my day!

How perfect that his name was Cox too!

Yes.. b'stard would't let me learn a musical instrument.... because I couldn't qualify for the choir!!
My brother learnt the trumpet and guitar.... and was in the choir!

I imagine backstage has its benefits though.